The two women who might be considered among the most royal individuals in the world have finally met, and things will never be the same. Beyoncé and Meghan, Duchess of Sussex, met in person publicly for the first time Sunday at the London premiere of Disney’s live-action Lion King remake.

As if the magical moment didn’t have enough star power already, Elton John and Disney CEO Bob Iger stood with the stars, too.

Jay-Z smiled on as his wife and the Duchess chatted, before Prince Harry said hello to them as well.

“You guys are busy,” Prince Harry can be heard saying in a video of the sweet encounter. Beyoncé reportedly said “my princess” upon seeing Meghan.

It was Meghan’s first red carpet event since Archie was born on May 6, though she’s appeared publicly at Trooping the Colour, Wimbledon and the King Power Royal Charity Polo Day where Prince Harry played last week.

Their public meeting comes after a blossoming social media friendship. Beyoncé gave Meghan Markle a shout-out on Instagram in February after she and Jay-Z won the Best International Group award from the Brits. The couple posed in front of a Tim O’Brien portrait of Meghan, calling back their similar pose in front of the Mona Lisa at the Louvre in Paris in the “Apesh-t” music video.

“In honor of Black History Month, we bow down to one of our Melanated Monas,” the caption said. “Congrats on your pregnancy! We wish you so much joy.”

Though Meghan didn’t react publicly to the Instagram, her makeup artist and friend Chris Martin told CBS in an interview that when he texted her about it, she responded wordlessly, as we all may. “She wrote me back like the big eye emoji,” Martin said.

“At the wedding her culture was front and center, and she and Prince Harry have continued to push the race relations dialogue forward both near and far,” Beyoncé said in a post.

Beyoncé and Meghan Markle also have some friends in common. Serena Williams, who was even featured in Beyoncé’s “Lemonade” music video, is a close friend of both the Duchess and the singer. Markle recently supported Williams during a Wimbledon match.

Needless to say, people can definitely feel the love tonight. 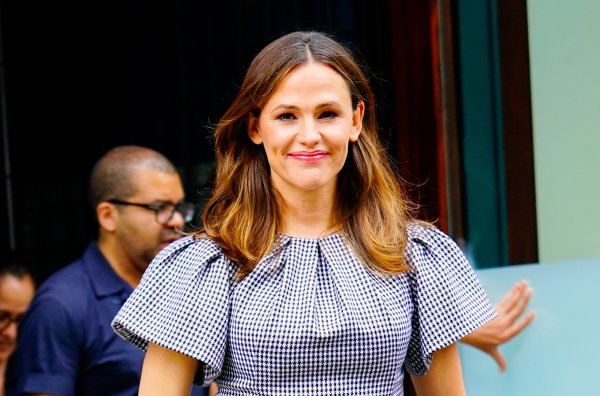 Jennifer Garner Confirms Her Love of Sweatpants with a Kiss
Next Up: Editor's Pick