There’s a peculiarly 19th-century sensibility at work in Dumbo, both the 1941 Walt Disney animated version and Tim Burton’s new live-action retelling. It’s as if, once the workhouses were abolished, we needed to find new ways to build character in children: Why not just rake over their nascent emotions by introducing them to an adorable baby elephant who’s “different” and then fixating on his distress as his mother is carted away? Don’t stop there: Detail every twist and turn of his precarious existence as he’s commodified and misused by people in power.

That approach was pronounced enough in the original Dumbo. With this update, the once-great, now not-so-great Burton revamps the story for a new generation, not that this new generation asked for it. Now we’ve got a Dumbo that’s cluttered with Burtonesque details—a parade of creepy clowns, a nightmare-themed circus populated by miserable animals—that are supposed to be cool and edgy but really just get in the way. The new Dumbo is ostentatious and overworked, less a work of imagination than a declaration of how imaginative Burton thinks he is. It’s hard to fathom that this is the same filmmaker who gave us that squiggle of delight Pee-wee’s Big Adventure, or those two somber yet unself-conscious Batman movies, or the elegiac Sleepy Hollow. His movies are now Frankenstein’s monsters of stitched-together elements: Things he likes, things he thinks his audience will like, things he believes are expected of him. He’s become a specialist in fulfilling some generic expectation of what a Tim Burton movie should be; it seems like forever since he’s just made a Tim Burton movie.

This Dumbo, shot by Ben Davis (also the director of photography on movies as disparate as Captain Marvel and Three Billboards Outside Ebbing, Missouri), is at least handsome-looking, shot in muted, faded-circus-tent colors. The story opens in 1919 Sarasota, Fla.: The Medici Brothers’ Circus—run not by actual brothers, but by one Max Medici (Danny DeVito, one of the movie’s few saving graces, subtle even in the midst of his character’s intentional exaggeration)—has fallen on tough times. Max is optimistic, though: He’s just bought an elephant, Jumbo, who’s about to give birth, and he’s hoping the baby will be a big draw. Not so fast: Baby Jumbo is born with giant, droopy ears. Some cruel circus-goers christen him Dumbo, and the name sticks.

It turns out, of course, that Dumbo’s big ears are an asset: they enable him to fly. His circus caretakers—Colin Farrell’s Holt Farrier, a former trick rider whose career has been curtailed because of a war injury, and his two children, Milly and Joe, played by Nico Parker and Finley Hobbins—strive to protect him from those who try to take unfair advantage of his talents, like Michael Keaton’s big-top bigwig V.A. Vandevere.

Vandevere hopes to make Dumbo an accessory to the act of trapeze performer Colette Marchant (an alluring but underserved Eva Green), though his evil scheme goes further than that. In the end, he’s foiled, as he must be. But in the meantime, it’s our job to watch poor Dumbo suffer. And oh, how he suffers! He gazes, with bewildered terror, as his mother—who has gone on a mini-rampage in an effort to protect him—is taken away. Later, miserable Dumbo is forced to wear humiliating clown makeup and to leap from soaring heights without a safety net. He’s momentarily cheered when he sees a cartoon fantasia of dancing pink soap-bubble elephants (Burton’s suitably semi-sinister tribute to the “Pink Elephants on Parade” number from the original). Then the bubbles are gone, and he’s more miserable than ever. Send me back to the workhouse—please.

And yet, this remake is still easier to take than the 1941 version. That’s because the new, computer-generated Dumbo, with his limp nun-veil ears and creepy, human-looking Zemeckis-style eyes—I had a PTSD flashback to The Polar Express—just isn’t that cute. He also has wrinkly, semirealistic-looking gray skin, which is part of the problem. It’s impossible to create a fake baby elephant that’s cuter than a real one. And in real life, baby elephants suffer plenty. Why invent excessive trauma even for a fictional one? 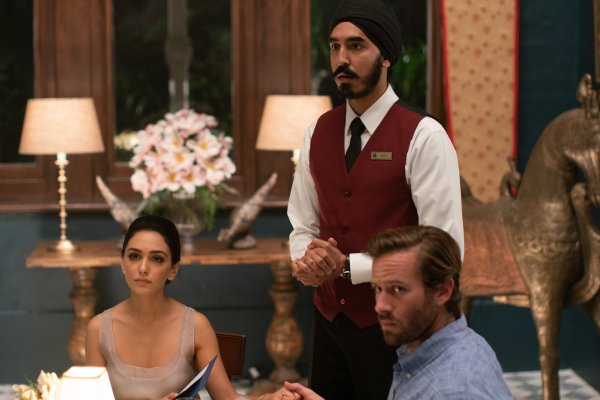 The True Story Behind the Movie Hotel Mumbai
Next Up: Editor's Pick