Lewis Carroll’s Through the Looking-Glass, and What Alice Found There is one of the trippiest children’s books ever written, a squiggly bit of tomfoolery made by a highly imaginative individual. James Bobin’s Alice Through the Looking Glass—a sequel to Tim Burton’s mad, cluttered 2010 Alice in Wonderland, featuring much of the same cast—feels like a movie made by committee, a picture with no rhyme, no reason and no real reason for existing other than to cash in on its predecessor’s popularity. The actors may as well have been zombified and then airlifted onto the set, they appear to have so little interest in being there. Mia Wasikowska returns as Alice, only in the movie’s vision, it’s not enough for her to simply slip into the looking-glass universe for some wild adventures. The plot has been junked up with a dumb framing device, hinted at in the earlier movie, that makes Alice the captain of her late father’s ship: In the opening sequence, she bravely guides the vessel through pirate-ridden seas. The point, in case you’ve missed it, is that Girls Can Do Anything. Of course they can! Why be so hamfisted about driving it home?

Eventually, Alice does creep through that mirror, at which point the fantasy element kicks in. It’s not much relief: The Mad Hatter (Johnny Depp), after reliving a childhood trauma, has taken to his bed. He may be dying—Alice rushes to help, but first must negotiate some time-travel nonsense involving Helena Bonham Carter’s Red Queen, Anne Hathaway’s White Queen and Sacha Baron Cohen as Time himself. All look as if they’re yearning to be elsewhere, perhaps suffering from dyspepsia triggered by the picture’s aggressive candy-shop production design. There’s lots of emoting and lots of rushing around, but very little in the way of emotion or sensible plot mechanics. Not even Wasikowska, whose presence is soothing by its very nature, can make this craven sequel worth watching. How can something so garish not even have a pulse? 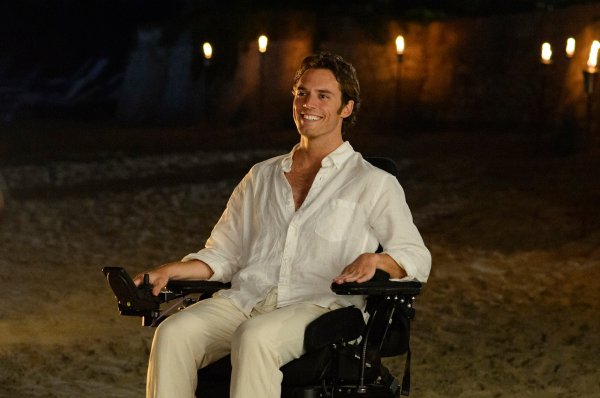 People Are Calling Out Me Before You for Its Portrayal of Disability
Next Up: Editor's Pick