Everyone loves a good, classic Disney song. But that’s not quite what you get with “Spirit,” Beyoncé’s new original song for the live-action remake of The Lion King, out July 19. In the movie, Beyoncé voices Nala and sings old favorites like “Can You Feel the Love Tonight” with Donald Glover, who voices Simba.

But unlike karaoke standbys like “Hakuna Matata,” you might need to do some vocal warmups before you can nail the notes to “Spirit.” Written for the movie by Beyoncé and her collaborators IIya Salmanzadeh and Timothy McKenzie and produced by Beyoncé, Salmanzadeh and Labrinth, it’s a soaring, gospel-inspired track that shows off Queen Bey‘s full range, particularly her lower tones. When she finally reaches the uplifting chorus, Bey has no qualms about drawing out each syllable to maximize the drama of the rich tune, echoed by a chorus that feels lifted straight out of a Sunday morning service. And then there’s Bey hitting a surprising falsetto in the bridge, just in case you forgot she possesses the voice that makes four key changes sound easy, as heard in “Love on Top.”

“Spirit” is the first song from an upcoming Lion King-inspired album curated by Beyoncé, called The Lion King: The Gift, which is expected to drop on the same day as the movie. (There will also be an official soundtrack featuring Beyoncé’s vocals on songs from the original 1994 animated movie.) “This is sonic cinema,” Beyoncé said of the new project in a statement. “This is a new experience of storytelling. I wanted to do more than find a collection of songs that were inspired by the film. It is a mixture of genres and collaboration that isn’t one sound. It is influenced by everything from R&B, pop, hip hop and Afro Beat.” 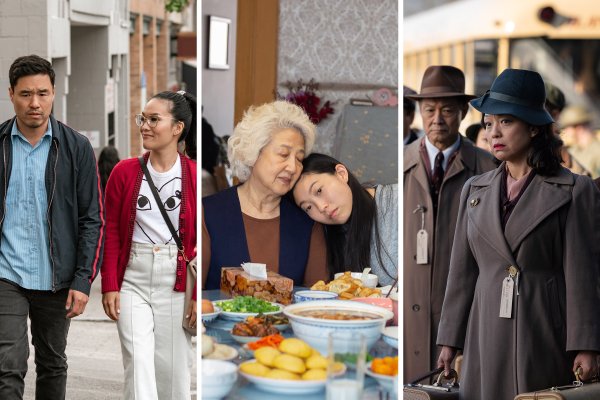 Crazy Rich Asians Kicked Down the Door. Now Asian Americans Are Fighting To Stay in the Room
Next Up: Editor's Pick