Photos of Royal Baby Archie at His Christening Are Here

Despite the privacy of the event, the first photos from royal baby Archie Harrison Mountbatten-Windsor’s christening are already here.

The pictures of Meghan, Duchess of Sussex, and her baby again gave royal fans insight into the fascinating lives of their favorite family. The first official portraits were shared on the Sussex Royal Instagram page hours after the christening, which was held on Saturday, July 6.

Archie’s parents, the Duchess and Prince Harry, Duke of Sussex, smiled from ear to ear in the photos taken in Queen Elizabeth II’s Private Chapel at Windsor Castle in Windsor, England.

Many members of the royal family, including William, Duke of Cambridge, and Catherine, Duchess of Cambridge, got together for the occasion. Queen Elizabeth II did not attend. However, the queen also didn’t attend Prince Louis’ christening, so that’s not exactly a surprise.

A second photograph in the Instagram post is an intimate black-and-white look at Prince Harry and Meghan with their baby boy. Both pictures were taken by photographer Chris Allerton.

“The Duke and Duchess of Sussex are so happy to share the joy of this day with members of the public who have been incredibly supportive since the birth of their son,” the post’s caption said. “They thank you for your kindness in welcoming their first born and celebrating this special moment.”

The royal family also shared the pictures on Twitter.

The pictures of Archie also reveal that he did wear the same christening gown as his cousins, Prince Louis of Cambridge, Princess Charlotte of Cambridge and Prince George of Cambridge. The “Royal Christening Robe,” as the Duke and Duchess called it in their Instagram caption, is a replica of the one that Queen Victoria had commissioned 1841. It’s made of fine Honiton lace lined with white satin.

It looks like little Archie is following in the footsteps of his cousin Prince Louis, who received all the attention last summer.

Aside from the official portraits shared soon after his birth in May, Archie has only been seen in a couple of Instagram photos on the Sussex Royal page, for Father’s Day and Mother’s Day.

The royal family is expected to release more official portraits from the event in the upcoming days, so prepare for even more Archie. 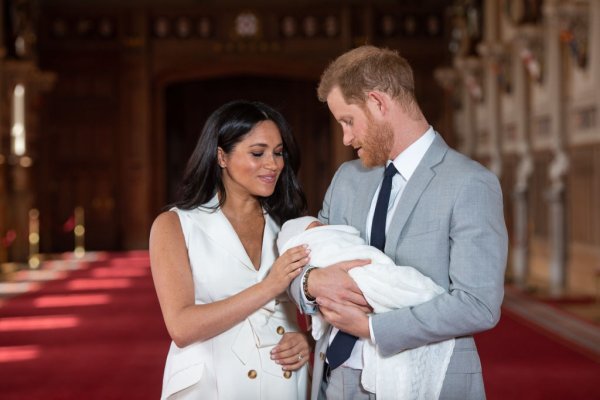 Why Meghan Markle Approach to Royal Baby Archie's Christening Isn't So Unconventional
Next Up: Editor's Pick