Meghan, Duchess of Sussex has given birth to her first child with Prince Harry, Duke of Sussex on Monday, May 6, the royal family has shared. The royal baby is the first child for both Meghan Markle and Prince Harry, and will be seventh in line to the throne. It is the Queen’s eighth great-grandchild. On Wednesday, they announced his name is Archie Harrison Mountbatten-Windsor.

“The Duchess went into labour in the early hours of this morning. The Duke of Sussex was by Her Royal Highnesses’ side. An announcement will be made soon,” a statement from Buckingham Palace announced Monday morning. Shortly after, they shared on Instagram that the couple had welcomed a baby boy. “We are pleased to announce that Their Royal Highnesses The Duke and Duchess of Sussex welcomed their firstborn child in the early morning on May 6th, 2019.”

Meghan, Duchess of Sussex, and Prince Harry, Duke of Sussex, just stepped out for their first public appearance

The couple stepped out with their baby for his first public appearance at Windsor Castle on Wednesday.

“It’s magic. I have the two best guys in the world, so I’m really happy,” Meghan Markle said. “He has the sweetest temperament. He’s just been the dream, so it’s been a special couple of days.”

Both said it wasn’t clear yet who in the family who baby Archie took after. “His looks are changing every single day,” Prince Harry said. “So, who knows?”

Parenting, Prince Harry said, is “amazing.” “We’re just so thrilled to have our own little bundle of joy.”

The Duke and Duchess of Sussex with their baby son, who was born on Monday morning, during a photocall in St George's Hall at Windsor Castle in Berkshire.
Dominic Lipinski—AP

Around the time that Harry was introducing his new son Archie to the world, his older brother Prince William was 250 miles away in North Wales, touring a coast guard search and rescue post with his wife Kate, the Duchess of Cambridge.

Following their public appearance, the couple said they were next going to see Queen Elizabeth and the Duke of Edinburgh.

“It will be a nice moment to introduce the baby to more family, and my mom’s with us as well,” Markle said.

The baby was introduced to the public while wrapped in a blanket from G.H. Hurt & Son, a longtime royal tradition that goes back about 70 years. The Duke and Duchess of Cambridge wrapped Prince George, Princess Charlotte and Prince Louis in similar blankets from G.H. Hurt & Son. Prince Harry and Meghan Markle’s newborn appeared wearing a $172 ivory shawl.

They also shared photos of Baby Sussex on Instagram

On Wednesday morning, Meghan Markle and Prince Harry also updated their Instagram account with a trio of photos by Chris Allerton showing the new parents and Baby Sussex at Windsor. The Duchess of Sussex wore a cream sleeveless trench dress.

“Today The Duke and Duchess of Sussex are delighted to share their first public moment as a family,” the caption noted. “They are so incredibly grateful for the warm wishes and support they’ve received from everyone around the world, since welcoming their son two days ago.” They did not yet publicly release a name for the baby.

His name is Archie Harrison Mountbatten-Windsor

On Wednesday shortly after their photo call, Meghan Markle and Prince Harry posted another update on their Instagram account. This time, it was about the name. “The Duke and Duchess of Sussex are pleased to announce they have named their first born child: Archie Harrison Mountbatten-Windsor,” they wrote. The name comes as something of a surprise to oddsmakers who were betting on more traditional British royal names.

Following tradition, a framed notice formally announcing the arrival of the Duke and Duchess of Sussex’s baby was placed on an easel outside of Buckingham Palace on May 6.

A picture shows an official notice set up on an easel at the gates of Buckingham Palace in London on May 6, 2019 announcing the birth of a son to Britain's Prince Harry, Duke of Sussex and Meghan, Duchess of Sussex.
TOLGA AKMEN—AFP/Getty Images

“The Queen and the Royal Family are delighted at the news that Her Royal Highness The Duchess of Sussex was safely delivered of a son at 0526 am today. Her Royal Highness and her child are both doing well,” the announcement read.

Prince Harry confirmed the birth, appearing live for cameras on Monday in front of a barn.

“It’s been the most amazing experience I could ever possibly imagine,” the Duke of Sussex said. “How any woman does what they do is beyond comprehension, but we’re both absolutely thrilled.” He added that they have not yet finalized a name, but plan to appear in about two days to share their choice — and “so everyone can see the baby!”

“This little thing is absolutely to die for,” he added, also noting how proud he was of his wife, the Duchess of Sussex.

Royals and friends share well wishes on the baby’s birth

The palace also confirmed that all the other immediate royal family members had been notified of the birth and are “delighted with the news.” Markle’s mother, Doria Ragland, was shared to also be “overjoyed,” and is with the Duke and Duchess of Sussex at their home of Frogmore Cottage in Windsor. First Lady Michelle Obama and Markle’s former Suits costar Patrick Adams were among their other star friends who publicly shared their well wishes as well. U.K. Prime Minister Theresa May sent best wishes, too.

The Duke and Duchess of Sussex made their news official on social media. “Their Royal Highnesses’ son weighs 7lbs. 3oz,” the announcement noted. “The Duchess and baby are both healthy and well, and the couple thank members of the public for their shared excitement and support during this very special time in their lives.”

Buckingham Palace later confirmed the Duchess of Sussex welcomed the baby at 5:26 a.m. on May 6, and that the Duke of Sussex was present for the birth.

The royal family confirmed the labor news early on May 6, sharing an announcement on social media that she went into labor in the “early hours” of the morning, and updating royal watchers that an announcement would follow.

The Duke and Duchess of Sussex first announced Markle’s pregnancy in October, following their royal wedding in May 2018.

Markle and Prince Harry chose to keep their birth plans private, announcing in April that they would be celebrating the birth as a new family before “sharing the exciting news with everyone.” While that choice is a departure from the approach of Catherine, Duchess of Cambridge and Prince William, who made their children’s births public, it’s not such a radical shift from royal tradition.

Markle and Prince Harry have made Frogmore Cottage at the Windsor estate outside of London their primary residence. Partially because of this, Markle was expected to opt for a different approach than Catherine, Duchess of Cambridge, who gave birth to all three of her children — Prince George, Princess Charlotte and Prince Louis — at St. Mary’s Hospital’s Lindo Wing in London.

Speculation that the birth was impending began when Markle’s mother, Doria Ragland, flew from the U.S. to the U.K. in April. Markle herself was notably absent from an Easter service earlier in April, suggesting the baby was imminent. Prince Harry, meanwhile, attended the London Marathon to cheer on runners at the end of April.

The Duchess of Sussex leaves after a panel discussion convened by The Queen's Commonwealth Trust to mark International Women's Day at King's College in London.
Yui Mok - PA Images—PA Images via Getty Images

The Duke and Duchess of Sussex traveled to Morocco on an official state visit back in late February, and have made a number of public appearances during Markle’s final stretch of her pregnancy upon their return to the U.K. before April.

You can follow along here as you await further updates on all the latest news on Meghan Markle’s first royal baby. 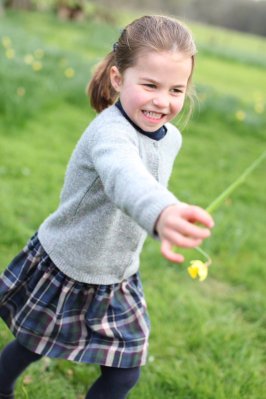 Princess Charlotte's Adorable 4th Birthday Photos Are Here to Help You Celebrate the Passage of Time
Next Up: Editor's Pick