Prince Louis, the youngest child of Prince William and Princess Catherine, is due to be christened later Monday, but his great grandparents Queen Elizabeth II and Prince Philip will not be in attendance.

Because the royal pair are aged 92 and 97 respectively, many have assumed their absence is due to health problems. But Buckingham Palace says that is not the case.

The Queen and her family mutually agreed she would not attend the event some time ago, palace representatives told the Press Association. A royal reporter for a British tabloid said the decision was made to conserve the monarch’s energy for a heavy week of engagements, including celebrations for the centenary of the Royal Air Force in London on Tuesday and a visit from U.S. President Donald Trump in Windsor on Friday.

Queen Elizabeth II recently had surgery to remove cataracts from her eye, while Philip, who retired from royal duties last year, underwent hip surgery in April.

Monday’s christening will be a private ceremony at the Chapel Royal of St. James’s Palace at 4 p.m. local time. Many royals will be there, including Louis’ grandparents, Prince Charles and Camilla Duchess of Cornwall, and his uncle Prince Harry, along with Meghan Markle (now officially titled Meghan, Duchess of Sussex). Kate Middleton’s parents, as well as her brother James and sister Pippa, will also attend.

The 3-month-old Prince Louis will have six godparents, who will all attend the christening. They were announced earlier Monday as Nicholas van Cutsem, Guy Pelly, Harry Aubrey-Fletcher, The Lady Laura Meade, Mrs. Robert Carter, and Miss Lucy Middleton.

Prince Louis will reportedly wear the same cream-colored lace gown as his older siblings did, a handmade replica of the Royal Christening Robe made in 1841 for Queen Victoria’s eldest daughter. 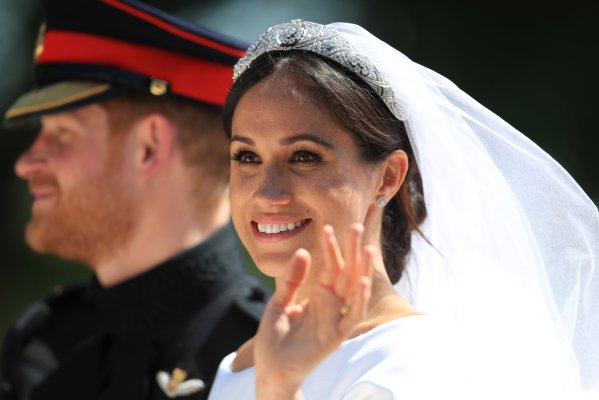 Meghan Markle Cried When Her Father Told Her He Would Miss Her Wedding
Next Up: Editor's Pick