The christening was the first public event for Prince Louis since his April 23 birth in London. For the religious ceremony at St. James’s Palace, also in London, all eyes were on that elaborate Prince Louis christening gown, plus his royal parents Kate Middleton and Prince William, as they accompany him to the event at the Chapel Royal.

Like his siblings Prince George and Princess Charlotte before him, Louis’s christening was his official introduction to the Church of England as he gets baptized into the faith. The event was presided over by the Archbishop of Canterbury Justin Welby; he’s the same Archbishop, in fact, who recently married Meghan Markle and Prince Harry, and also baptized George and Charlotte at their ceremonies. And Prince Louis was decked out in the same historic christening gown his siblings also donned for their days, the palace confirmed on Monday.

Spectators gathered at the central London royal residence also caught a glimpse of Louis’s siblings and aunt and uncle Meghan Markle and Prince Harry, the Duke and Duchess of Sussex, as well as his grandfather Prince Charles and Camilla, Duchess of Cornwall. His great-grandmother Queen Elizabeth and the Duke of Edinburgh did not show up. A royal reporter for a British tabloid said the pair would not attend in order to save the Queen’s energy for a very full week of events.

Besides the immediate family and siblings, the royals were also joined for the ceremony by the young Prince Louis’s six godparents. The palace shared Monday morning prior to the christening that those godparents are Nicholas van Cutsem, Guy Pelly, Harry Aubrey-Fletcher, Lady Laura Meade, Mrs. Robert Carter and Lucy Middleton.

As for the service itself, William and Kate selected two hymns, two lessons (from St. Mark and Ephesians, read by two of the godparents-to-be) and two “anthems” to celebrate little Louis, including a traditional Welsh lullaby and a song composed for their own 2011 wedding called “This is the day which the Lord hath made,” as the royal website outlined in a Monday update.

After the arrival of the Middleton family members (including Kate’s sister Pippa and brother James), the royals made their entrance, with Prince George and Princess Charlotte holding on to their dad Prince William’s hands, and the Duchess of Cambridge cradling her youngest son in his flowing christening robe. They chatted briefly with the Archbishop before entering the chapel, followed by the Duke and Duchess of Sussex.

Once the brief ceremony concluded, the royal family made for the exits — with Princess Charlotte offering a parting wave to the cameras.

Watch below as the day unfolded. 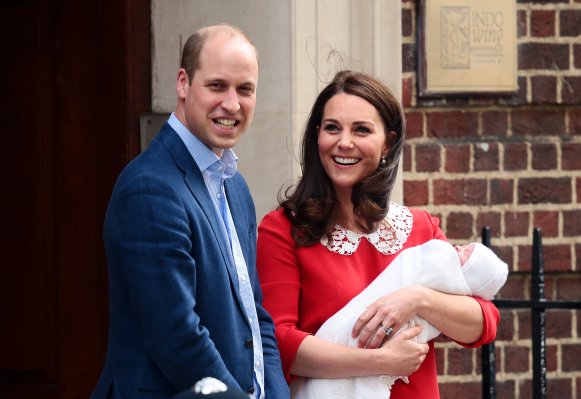 Here's One Royal Tradition You Won't Be Following. Everyone’s Eating 7-Year-Old Cake at Prince Louis’s Christening
Next Up: Editor's Pick