Britain's Prince Harry, Duke of Sussex (R), and his wife Meghan, Duchess of Sussex, pose for a photo with their newborn baby son, Archie Harrison Mountbatten-Windsor, in St George's Hall at Windsor Castle in Windsor, west of London on May 8, 2019.
DOMINIC LIPINSKI—AFP/Getty Images
By Rachel E. Greenspan

The next look at Archie Harrison Mountbatten-Windsor is here, and the adorable royal baby may just break the internet.

Prince Harry, Duke of Sussex, is ready for his first Father’s Day. He and Meghan, Duchess of Sussex, shared another peek at the royal baby for the special occasion.

“Happy Father’s Day! And wishing a very special first Father’s Day to The Duke of Sussex,” the Sussex Royal Instagram shared in a post on Sunday, along with a picture of Archie’s little hand wrapped around his father’s finger.

It’s only the second time we’ve caught a glimpse of Archie’s face since he was born on May 6. He was first shown during the family’s first official appearance together on May 8.

Sunday’s Instagram was similar to Meghan Markle’s Mother’s Day post, which showed baby Archie’s two feet in the palm of his mother’s hand. “Paying tribute to all mothers today — past, present, mothers-to-be and those lost but forever remembered,” the caption said.

The Mother’s Day photo also had a poignant connection to Prince Harry’s late mother, Princess Diana, by featuring her favorite flowers in the background. Those forget-me-nots were also featured at Prince Harry and Meghan Markle’s wedding. 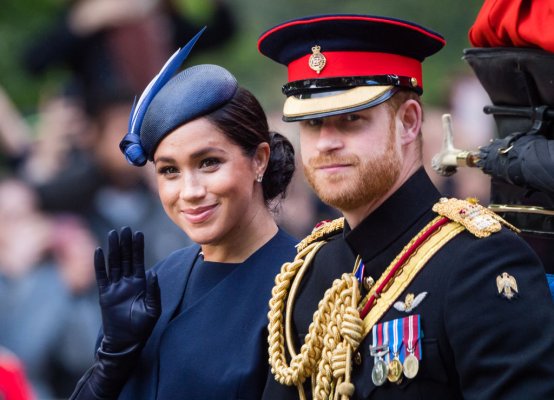 Meghan Markle's First Major Post-Baby Outing at Trooping the Colour 2019 Looked Like a Lot of Fun
Next Up: Editor's Pick