Sitting Is Bad for Your Health, But Not All Types of Sitting Were Created Equal

The countless recent studies and articles about the health risks of a sedentary lifestyle likely haven’t sat well with desk workers, for whom standing desks and walking meetings are some of the only ways to avoid near-constant sitting during the workday.

But a new study published in the Journal of the American Heart Association has some encouraging findings for the desk-bound. Sitting at work, it says, may not be as bad for your heart and longevity as sitting and watching television during your free time.

“There’s been a lot of talk about how sitting is the new smoking,” says first author Jeanette Garcia, an assistant professor of sport and exercise science at the University of Central Florida. “But is all sitting created equal? The results from our study suggest that, no, perhaps it’s leisure-time sitting that’s more of a risk than occupational sitting.”

For the study, almost 3,600 African American adults reported the amount of time they’d spent sitting at work, watching television and exercising over the previous year. They also provided demographic, lifestyle and health-history information. The researchers monitored the participants’ health over eight years, during which 129 had a cardiovascular issue and 205 died.

After adjusting for health and lifestyle factors, the researchers found that “often or always” sitting at work was not associated with a heightened risk of death and heart disease. But those watching four or more hours of television per day had a 50% higher risk of heart issues and death, compared to those watching two hours or less per day.

The study only involved African American adults, who report disproportionately high rates of cardiovascular issues, but Garcia says the results likely apply to other populations too. Demographic factors did play a role in the study, though—namely with regards to the type of person who has a desk job versus a more active job. Compared to those who rarely sat at work, people in the study with sedentary jobs were more likely to exercise outside the office regularly, have a high school degree, make more money and eat a healthy diet; they were also less likely to drink heavily and smoke. Previous studies have also suggested that the physical strain associated with active jobs may shorten workers’ lifespans.

Exercise outside of work, on the other hand, is nearly always good for health. And people who spend a good chunk of their free time watching television likely do so at the expense of exercising, Garcia notes, which research has shown can mediate some of the harmful effects of a sedentary lifestyle. In the new study, for example, those who got at least 150 minutes of moderate or vigorous physical activity per week had a lower risk of health problems, even if they also watched a lot of TV. A separate recent study also found that replacing just 30 minutes of daily sitting with any other activity reduced mortality risk by 17%.

Vegging in front of the TV may also inspire other unhealthy habits, Garcia says. “Leisure-time sitting and television-viewing is usually linked with other behaviors, such as snacking” or consuming alcohol, she says. “Or if you’re watching television late at night that could disrupt sleep patterns, which is also linked with cardiovascular disease.”

Plus, the way people sit in front of the TV is likely different than the way they sit at their desk, Garcia says. “If you’re watching a show or a movie, you don’t get up,” she says. “At the office, usually you have to go get up and talk to someone, or go out to get a drink of water. Breaking up sedentary time is actually associated with a decreased risk of cardiovascular disease.”

Garcia emphasizes that more movement and less sitting is always better, but she says the findings should give desk workers some peace of mind, as long as they take breaks to move around the office and get enough physical activity outside of their nine-to-five. 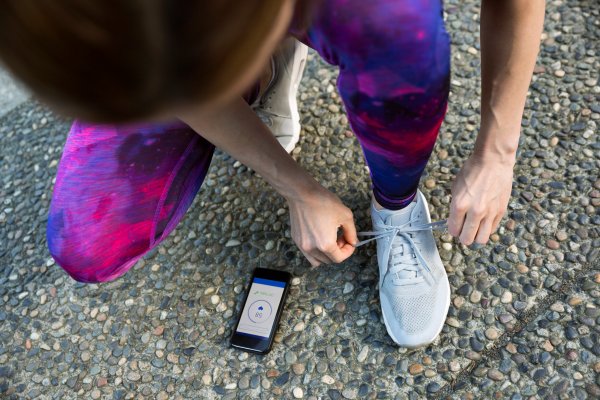 You May Not Need the 10,000 Steps a Day Your Fitness Tracker is Telling You to Take
Next Up: Editor's Pick