Sitting All Day Isn't As Bad If You Do This

There’s a growing drumbeat to get all of us out of our chairs and off our bottoms. Some studies, including the most recent analysis, suggest that something about being sedentary can lead to poor health outcomes, including heart disease and things like obesity, diabetes and overall “fitness”—which, in technical terms, is a measure of how strong the heart and respiratory system are. Those studies found that even people who exercised weren’t immune to the dangers of sitting—though exercise did help.

But were the effects of sitting actually independently lowering fitness and causing health problems, or was the sitting just a reflection of the fact that people who sat more spent less time being active?

Kerem Shuval, a research specialist in nutrition and physical activity at the American Cancer Society, and his colleagues wanted to address that question. So they turned to the Cooper Center Longitudinal Study, an ongoing trial of white men that measures how lifestyle behaviors affect disease and longevity. They asked the men about how many hours they spent in a car or watching TV (the sedentary part) and then put them on a treadmill to record their fitness levels, as well as tested their blood for cholesterol and blood sugar. The scientists also calculated the participants’ body fat percentage, their waist circumference and their body mass index (BMI).

When they adjusted for the amount of physical activity that the men reported, they found that those who spent more hours each week in a car or watching TV showed higher triglyceride levels, a higher BMI, waist circumference and more body fat compared to those who reported less than nine hours a week of sedentary behavior.

MORE: An Hour of Exercise Can Make Up for a Day of Sitting Down

But when Shuval then factored in the mens’ fitness levels, he found that most of the interaction with negative health outcomes went away. “Once we controlled for fitness, the effects of sedentary behavior were a lot less pronounced on health outcomes,” he says.

So there’s no question that people who are fit, which means they are physically active, and those who exercise regularly, enjoy better health. The question is whether you can get fitter not just by becoming more active, but also by sitting less. “The jury is still out in my mind about what to do about decreasing sitting,” says Shuval, who published his results in Mayo Clinic Proceedings.

There are some studies that follow people over time that found that more sitting time is linked to a higher risk of early death. But that could be due to the fact that people who sit more are less physically active, so sitting is displacing exercise. Shuval found, for example, no strong association between how much time people spent sitting and their risk of metabolic syndrome – the constellation of risk factors connected to heart disease – nearly nine years later. That suggests that physical activity, and not something unique about sedentary behavior, may be the driving factor in that syndrome.

MORE: Now There’s Another Reason Sitting Will Kill You

That’s supported by a study published in PLOS ONE in January 2014 in which researchers from the U.S. and Australia found that when they included all levels of physical activity – not just moderate or vigorous activity, but even the light forms that make up most of what people do during the day – the negative effect of sitting on adverse health measures like blood pressure, cholesterol levels, blood sugar and waist circumference disappeared. In other words, how active people are – and the more active they are, the less they sit – likely has the strongest effect on health.

Shuval, however, admits that his results likely aren’t the definitive ones that will resolve the question of how sitting affects our health. The men in the Cooper study, for example, were only asked about the time they spent in their cars or watching television; they didn’t account for time spent sitting at their jobs, for instance, so the sedentary time could have been underestimated. They also only asked about sedentary habits once, so the study couldn’t account for any changes the participants had in the amount of time they spent in chairs.

The uncertainly probably explains why there aren’t yet any guidelines about healthy and unhealthy amounts of sitting time, as there are for physical activity. “We haven’t established yet by how much we need to reduce sedentary behavior and how to do it,” says Shuval. But one thing is clear – sitting less means you are probably more physically active. And there is plenty of evidence suggesting that’s good for your health. 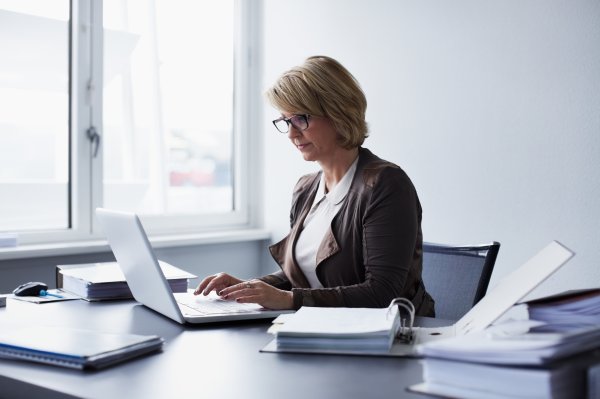 7 New Ways to Sit Less
Next Up: Editor's Pick