The Most Over-the-Top Looks From the 2018 Met Gala

The Metropolitan Museum of Art’s annual Costume Institute Benefit — more colloquially known as the Met Gala — is undeniably fashion’s biggest night, which means it’s the ultimate event for celebrities to take the sartorial risks that they might not on an awards show red carpet or in every day life. The 2018 Met Gala theme, Heavenly Bodies: Fashion and the Catholic Imagination provided ample opportunity for this year’s attendees to flex their creativity.

While Rihanna, a noted Met Gala maven, fully committed to the theme by showing up in a papal ensemble, others, like Greta Gerwig and Zendaya leaned into the theme by drawing inspiration from figures like Joan of Arc and the clergy. From the night’s saints to the sinners, here’s a look at the best, worst, and craziest looks from the 2018 Met Gala red carpet.

It’s a fact universally acknowledged that Rihanna is the reigning queen of the Met Gala red carpet; her fierce looks not only always bring the heat, but always, always adhere to the theme. So it should come as no surprise that this year, the bad gal pulled out all the stops for her look as the night’s co-host for the gala, by wearing a custom, pearl and crystal-encrusted Maison Margiela look inspired by a papal regalia and complete with a matching mitre hat. Navy, meet your new Pope, Rihanna.

Best Homage to a Saint: Zendaya in Versace

There’s following a theme and then there’s committing to it. Zendaya falls into the later category. While many people looked to Catholic saint Joan of Arc for inspiration for the night, Zendaya’s chain mail and armor-inspired Versace look dominated the red carpet.

Musicians Jared Leto and Lana del Rey were ethereal beings on the Met Gala red carpet in full look Gucci; Leto channeled a Baroque Jesus with a golden crown sitting on his flowing shoulder-length locks, while del Rey took accessories to the next level with an avian headpiece and a cream gown that had a 3-dimensional sacred heart embellishment, complete with mini daggers.

It seems only right that the Migos, who rose to fame in the music scene with their single, “Versace,” came attired to the 2018 Met Gala in suits made out of the Italian fashion house’s trademark bold print fabric.

Most Angelic: SZA in Versace

SZA confirmed that she is, actually, an angel on earth with a divine pink Versace gown and a matching delicate gold halo.

Lily Collins had no fear of going to the dark side when she showed up on the Met Gala red carpet in an edgy black Givenchy gown paired with a black halo and celestial tears makeup.

Ariana Grande made her Met Gala debut in a sweeping ball gown by Vera Wang that featured the famed art from the Sistine Chapel, which was painted by Michelangelo. Ari topped it all off with her trademark high ponytail and an effusive bow.

Best Channeling of the Immaculate Conception: Cardi B in Moschino

Cardi B’s pregnancy is hardly slowing down the rapper’s meteoric success, which is why her Immaculate Conception-themed look for the Met Gala seems especially apropos. The pearl-laden look (which accentuated her growing baby bump) references art of the Virgin Mary.

The Look Most Likely to Be Repurposed for a Wedding: Kate Bosworth in Oscar de la Renta

Kate Bosworth’s sweet Oscar de la Renta gown and veil were not only completely on theme for the the night, but could also double as a bride’s look in a pinch.

Greta Gerwig gave The Row’s signature minimalism a very religious bent on the steps of the Met Gala.

Chadwick Boseman made a case for wearing all-white before Memorial Day when he showed up to the Met Gala in a white, gold embellished suit and matching cape.

Best Headwear of the Night: Frances McDormand in Valentino

Frances McDormand showed off her flair for the dramatic when she arrived at the Met Gala in a full Valentino look consisting of a voluminous teal cape over a lime pantsuit. However, the piece de resistance of her look was her floral headpiece that completely enveloped her head.

Sarah Jessica Parker is a longtime attendee of the Met Gala whose looks never disappoint and this year was no exception; SJP arrived in style to the Met Gala in a regal Dolce & Gabbana gown, but the real draw of her look was the towering nativity scene headpiece by Philip Treacy she wore with it.

Most Unconventional Accessory of the Night: Jaden Smith in Louis Vuitton

Jaden Smith, always one to march to the beat of his own drum, paired his Louis Vuitton look with the gold certification of his song “Icon,” because why not? Last year, Smith memorably brought another unconventional accessory — his shorn dreadlocks.

Most Unconventional Accessory of the Night, Honorable Mention: Katy Perry in Versace

Katy Perry, never an artist to shy away from a bold fashion statement, coupled a gold Versace chainmail mini dress and matching boots with a pair of angels wings that spanned nearly 6 feet. All we want to know is how Perry sat down that night.

Lena Waithe used her time on the red carpet at the 2018 Met Gala to send a powerful message about inclusivity.

Most Likely to Be Mistaken for Avant Garde Art: Solange Knowles in Iris Van Herpen and Brother Vellies

Solange Knowles, who embraces performance art as an aspect of her music, upped the ante for merging the fashion and art worlds when she showed up in a structural black vinyl dress from Iris Van Herpen, a halo, matching glossy thigh-high heeled boots from Brother Vellies, and a crystal encrusted du-rag that spelled out “My God Wears a Du-rag.”

When it comes to the Met Gala, Anna Wintour is the OG. The Vogue editor-in-chief has been hosting the annual gala since the mid-’90s and always looks chic, but this year, her dress was particularly show-stopping. The Chanel gown featured heavy embellishment and shoulder cutouts that alluded to a clerical collar — spiritual and saucy! 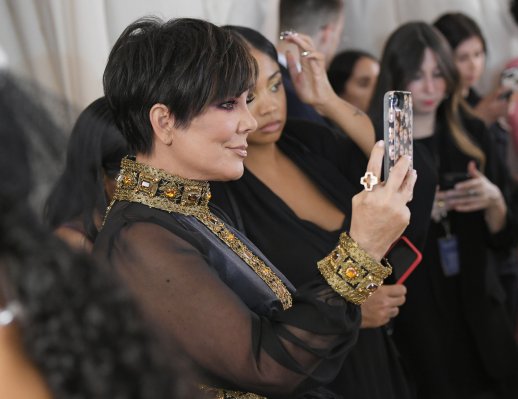 Kris Jenner Was the Ideal Internet Mom at the 2018 Met Gala
Next Up: Editor's Pick