Protesters and counter-protesters meet outside of the Supreme Court at the Women's March and Rally for Abortion Justice in Washington, on Oct. 2.
Elizabeth Bick for TIME
By TIME Photo Department

Some years, when viewed in retrospect, resemble nothing so much a swirl, all movement and color, no one thing dominant. Others feel like a mountain we will live in the shadow of for a long while. The year just ending is more like a checkerboard, though a checkerboard with more than two colors, and its squares staggered at random heights: some towers, some pits and some elevated just enough to trip a person.

That much is clear from the best of the images captured by photojournalists for TIME over the last 12 months. The same U.S. Capitol building that one day was under assault by supporters of a losing candidate—the arm of one intruder finding leverage on marble balustrade; another reclining in a ransacked office—reverted, just two weeks later, back to its role as ceremonial backdrop for the peaceful transfer of power.

The COVID-19 pandemic would begin a retreat as welcome (and, it turned out, as fragile) as a baby coming off a ventilator. But strife waited in the return to semi-normal life: abortion rights protests and Latin Americans suspended in the limbo of migration.

The bad news: climate change grew only easier to photograph, a crisis visible in a heat wave that made an ice machine the best friend of a polar bear in an Oregon zoo. The better news was the cool buoyancy of proposed solutions: a celebrated chef harvesting grain from sea grass, and a worker doing safety training for offshore wind farms by bobbing in the North Atlantic.

There was joy out there in 2021. No previous image of a politician’s spouse captured what Doug Emhoff threw off when, while touring Elizabeth, N.J. America’s Second Gentleman came upon a group of high school students doing yoga, and struck a tree pose in a blazer and slacks. And what Ruddy Roye caught in a Minneapolis hotel ballroom when the family of George Floyd heard the word “guilty” in the trial of Derek Chauvin looked a lot like transcendence.

Yet if progress could be detected in 2021, momentum was harder to detect. No single image could capture so complex a year. But the photograph on the cover a May TIME cover—of a COVID-19 victim being carried across the scorched earth of a New Delhi crematorium—managed to contain at least the iconography of the overlapping crises that made it such a challenge to navigate.—Karl Vick 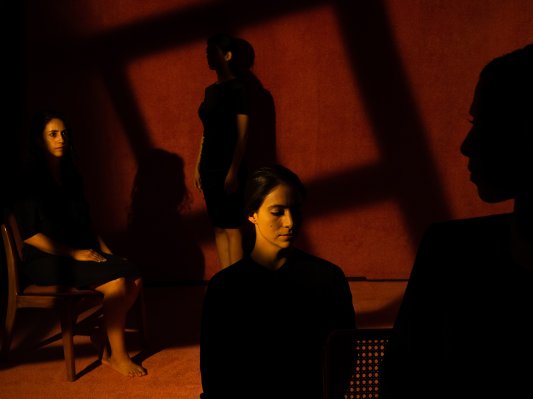 TIME's Best Portraits of 2021
Next Up: Editor's Pick