The First U.S. Offshore Wind Farm Could Be a Lifeline for Struggling New England Cities

As many of New England’s industrial cities fell into decline in recent decades, the wealthier residents of Martha’s Vineyard, a regional center of affluence and privilege, have gotten richer, building and rebuilding beachfront megamansions. But their good fortune has hardly benefited everyone on the island, where economic inequality has run rampant. For Michael Friedman, a 55-year-old IT engineer, rising prices driven by rich residents’ expanding wealth have made it harder to stay and raise his family on the tree-covered Massachusetts island where he grew up. “What can you say?” he says, driving past the Obama family’s Vineyard property in late October. “We’ll try to make a go of it.”

Now, 15 miles off the island’s coast, a new green-energy project is getting under way that many hope will begin to spread the wealth. In a matter of months, workers will begin erecting 837-ft.-tall wind turbines for Vineyard Wind, the country’s first commercial-scale offshore wind farm. When fully operational, the plant will generate 800 megawatts of electricity, enough to power 400,000 homes. More than a dozen other East Coast offshore wind projects are awaiting government approval, and the plans portend an entirely new clean-energy industry—with thousands of new, high-paying jobs to go along with it.

Workers participate in a sea survival training course at the Massachusetts Maritime Academy in Bourne, Mass.
Tony Luong for TIME

But there’s a catch: hardly any U.S. workers have experience building and operating offshore turbines. Community organizations, unions and colleges are now filling that gap, launching training programs in a broad effort to create a new American offshore wind workforce. For organizations that have plowed considerable time and money into education programs for projects that don’t yet exist, these efforts are something of a leap of faith. The same is true for the workers who are undergoing those courses, hoping that a brand-new, eager-to-hire clean-energy industry will await them on the other side.

Friedman is one of those would-be wind workers. For months he’s been taking online classes for an offshore-wind-tech certification through ACE MV (Adult & Community Education Martha’s Vineyard) and Bristol Community College. He’s taking the course partly for personal interest, though he says he would consider switching careers if the opportunity came up. But with Vineyard Wind more than a year and a half from producing power, he’s far from certain that the work he and his fellow students are doing will result in a job. Offshore wind has been just over the horizon for decades, with endless legal battles grinding a previous Massachusetts venture, Cape Wind, to a halt in 2017. Things are likely to be different with Vineyard Wind—the project is located farther offshore and hasn’t faced the same intensity of local backlash—but many, like Friedman, remain skeptical. “I’ll believe it when I see it,” he says.

Yet others are diving in. On a brisk November morning, a handful of Piledrivers Local 56 workers shivered as they floated in the ice-cold water of Buzzards Bay, Mass., for a training session. During an earlier safety lecture, one of the workers, Nick Fileccia, had made a few wisecracks. Now, after the piledrivers donned bright orange ocean survival suits and slipped off a dock into the blue-gray water, he was dead serious. “Man, that water,” he said after emerging from 30 minutes in the frigid bay, during which he and his classmates had to right an overturned life raft. “I was all jokes until we got in that water.”

That exercise was part of a Global Wind Organisation (GWO) training program designed to prepare millwrights, ironworkers and other tradespeople for the unique challenges involved in doing their jobs at sea. Besides sea–survival modules and classroom components, it includes portions on working at heights, first aid and fire safety. “A lot of it is teaching them skills that we hope that they never have to use,” says Mike Burns, director of the Center for Maritime and Professional Training at the Massachusetts Maritime Academy. “Practicing an emergency escape from a wind turbine is something you hope you never have to do in real life, but you’re glad that you’ve been trained how to do it.” The academy is currently one of the only places in the U.S. where workers can get this type of training, but it may soon be offered at many more locations up and down the East Coast.

Labor organizations are among the largest supporters of such programs. The Eastern Atlantic States Regional Council of Carpenters, for instance, is planning to upgrade a training facility in New Jersey with a wind–turbine mock-up, cranes and other equipment. “We’re in it for about $700,000, $800,000 so far,” says William Sproule, the organization’s executive secretary-treasurer. Meanwhile, the New York State Building & Construction Trades Council is planning to increase class sizes in existing training programs to up the number of workers it can prepare for anticipated local offshore wind projects. “We are really at the very beginning, the precipice, of offshore wind on the East Coast,” says union president Gary LaBarbera. And as Vineyard Wind gets under way, the Massachusetts Building Trades Council, another union, plans to set up a kind of offshore worker training pipeline, starting newer workers on the onshore portions of the project, like building electrical substations, and then moving them out to sea. “That’s the way you develop a stable workforce and a skilled workforce for this industry,” says union president Frank Callahan.

Meanwhile, Bristol Community College, where Friedman is currently studying, is sinking $10 million into launching what it’s calling the National Offshore Wind Institute. Scheduled to open in 2022, the facility will focus on training workers (rather than teaching courses for college credit) and will offer programs on other aspects of the offshore wind industry, like finance and insurance. Jennifer Menard, the college’s vice president of economic and business development, says her goal is to help replicate the economic investment that offshore wind spurred in cities like Cuxhaven in Germany and Hull in the U.K. Facilitating such a renewal, Menard says, means stepping up investments in education to fill gaps in the current U.S. workforce. “I saw what offshore wind could bring,” she says. “It was just an opportunity that we wanted to be ready for.”

Workers preparing to erect new offshore wind farms along the U.S. East Coast in the coming years are taught how to do their jobs at sea and trained in emergency survival techniques.
Tony Luong for TIME

Europe, where offshore wind is a long-established industry, may also offer an ideal training ground for U.S. workers. Orsted, a Danish offshore-wind giant, is bringing more than a dozen American workers to train at its European sites for months at a time. The idea, says Orsted’s head of North America operations Mikkel Maehlisen, is to create an elite group of workers who can in turn train more Americans as the company’s U.S. projects—like a planned 700–megawatt wind farm off Rhode Island—get under way.

Despite this flurry of training investment, some U.S. labor leaders worry that as the country decarbonizes, an expansion of offshore wind won’t provide as many jobs as its proponents hope, especially compared with the expected loss of labor-intensive fossil-fuel power-plant projects. David Langlais, business manager of Ironworkers Local 37 in Rhode Island, is particularly concerned about the fact that many offshore-wind–related jobs come from manufacturing turbine components—an industry based largely in Europe—rather than erecting and maintaining such equipment offshore. “There’ll be a tremendous amount of hours that the American workforce will lose out on,” he says.

Langlais wants offshore–wind manufacturers like GE, which is supplying turbines to the Vineyard Wind project and makes many of its components in France, to produce turbines and similar gear domestically—a goal offshore-wind developers say they support. Orsted, for instance, has tapped Local 37 iron-workers to help erect a huge steel structure at the port in Providence, R.I., to be used to manufacture bases for the company’s offshore turbines. And despite his reservations about offshore wind, Langlais says his union is committed to the green-energy transition.

“I’m not a scientist, but clearly we’re getting more hurricanes, we’re getting worse storms, it’s getting warmer,” Langlais says. “There’s obviously something to this climate change, and it has to do with carbon emissions. So we have to do the right thing.”

Back on Martha’s Vineyard, Miles Brucculeri, 44, is studying hard despite his doubts about future employment. He’s worked as a surfing instructor for the past two decades but isn’t sure how much longer he’ll be able to swim the five daily miles such work requires, and he’s been frustrated by a lack of local work opportunities with health benefits during the long off-season. “You’re either serving rich people in this kind of fake, rich-people economy, or there’s not much out here,” he says. At the moment, Brucculeri is 11 months into Bristol Community College’s two-year offshore-wind education course. By the time he finishes, Vineyard Wind’s offshore turbines will still be at least six months from producing power. Even after they go online, there’s no guarantee he’ll be hired as a technician. But in order for offshore wind to take off in the U.S. as it has elsewhere in the world, more people like him will have to take the plunge. “The opportunity came up, so I took it,” Brucculeri says. “I don’t know where it’s gonna lead.” 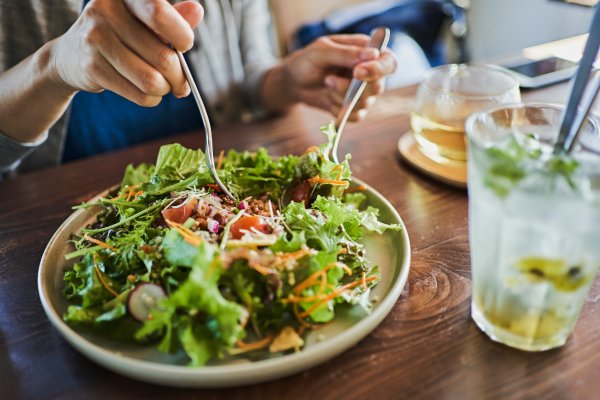 How Your Post-Thanksgiving Diet Could Help Save the Planet
Next Up: Editor's Pick