Doug Emhoff Is Still New at This

Emhoff practices his tree pose with a yoga class during a visit to New Jersey on Oct. 19, 2021.
Landon Nordeman for TIME
By Charlotte Alter

It’s a sunny October day, and Doug Emhoff is back in his native New Jersey for the first time as Second Gentleman of the United States. “It looks surprisingly the same, except this beautiful city walk we’re on, which is incredible,” he says, gesturing to a riverside pathway, which sits across from a set of dumpsters, a pile of old mattresses and an ambulance parking lot. “It really feels like home.”

Emhoff has just finished a long day of asking people how it’s going. First, he was at a Newark high school, asking students, “How’s it going? Going back to school?” He told the principal that they’ve “got it going on” with their high student vaccination rate. Then, after eating lunch at a picnic table outside a diner, he had come to this scenic path in Elizabeth to visit young environmental-cleanup workers and talk about the climate provisions of President Joe Biden’s Build Back Better plan. Emhoff walks abnormally slowly, his hands clasped at his belt, pretending to ignore the photographers crouching ahead of him. Occasionally, he looks down at a rectangular note card and then says something like, “What does a space like this do for your community and your peers?”

Emhoff arrives at East Side High School in Newark.
Landon Nordeman for TIME

If all this seems a little new to him, Emhoff deserves a bit of slack. Not long ago, he was a single dad and L.A. lawyer perhaps best known for winning an intellectual-property case involving the Taco Bell Chihuahua. Today, the husband of Vice President Kamala Harris—he actually refers to her as “Kamala Harris” when she’s not around—is the first ever male spouse of a Vice President and the first Jewish person in one of the two leading couples of American life.

Emhoff has turned out to be pretty good at this unlikely role. He’s one of the White House’s most enthusiastic surrogates, traveling to 30 states and 21 COVID-19-vaccination clinics to promote Biden and Harris’ domestic-policy agenda and vaccination push. Party fundraising emails sent out under Emhoff’s name do as well as those signed by high-profile congressional Democrats, according to a party spokesperson, and Emhoff was one of the party’s top five email fundraisers in September.

I wanted to know what it was like for a regular guy to suddenly become one-quarter of America’s most powerful double date. Few people get to inhabit the all-encompassing political machinery that surrounds the President and Vice President; fewer still experience it with fresh eyes, unjaded by decades of guarded politicking. In the span of just over a year, Emhoff has been thrust into an uneasy world of constant scrutiny and heightened security. “He never used the word lonely, but I think there’s so much stuff that he can’t do,” says one old friend.

Snapping a selfie with Tammy Murphy, the first lady of New Jersey, and East Side High School students in Newark.
Landon Nordeman for TIME

Does Emhoff ever stop to wonder how a guy who is trying to get his wife to like Radiohead and named his fantasy football team “Nirvana” became someone who’s surrounded by earpieced bodyguards and gets birthday gifts from the President of the United States? He smiles, blinks slowly and says in a low voice, “Every minute of every day.”

Emhoff works from a corner office at the end of a gleaming hallway in the Eisenhower Executive Office Building, next to the White House and overlooking the Washington Monument. It’s crammed with knickknacks: a photo of his first flight on Air Force Two; a map with pins for every place he’s visited as Second Gentleman; a souvenir from star quarterback Tom Brady’s visit to the White House. “Everyone wanted to talk about football, so I asked him about golf,” Emhoff recalls. “And at the end, I said, ‘Who are you again?’”

Born in Brooklyn in 1964 and raised in Old Bridge, N.J., Emhoff moved as a teenager to California, where he attended college and law school. As a corporate lawyer at Venable LLP in Los Angeles, he represented clients like the pharmaceutical company Merck and the arms dealer Dolarian Capital, as well as the husband of one of the Real Housewives. Former colleagues recall him as competitive where it mattered, but with a reputation for looking out for younger associates. One junior colleague recalled that Emhoff would be the partner who ordered Chipotle for associates working long nights at the office. Emhoff is a “good sit-next-to guy,” says his close friend Mitch Evall. “He’s a really pointed observer of human behavior.”

Everyone I called told me the same thing: Emhoff seems to be, as NBCUniversal CEO Jeff Shell put it, “just a good dude.” Emhoff’s son Cole described him as “a little embarrassing,” and mentioned his habit of falling asleep in movies. Cole and his sister Ella used to tease Emhoff for forcing them down black-diamond slopes on family ski trips, in what they called “Evil Daddy Ski School.” (He named them Cole and Ella after jazz greats; they call him “Doug,” not Dad.) Cole says his friends like to rib him about the Democratic fundraising appeals they receive under his father’s name: “Oh, your dad just emailed me.”

Emhoff met Harris in 2013 on a blind date set up by a mutual friend. He was immediately smitten. Even now, friends say Emhoff is so excited to see the Vice President when she comes home that he will hang up on them in the middle of a FaceTime conversation. “He’ll be like, ‘She’s home!’” says Evall, “and it’s a blank screen.”

When the couple met, Harris was the attorney general of California—a big job, but not one that required Emhoff to upend his life. Even when Harris won a U.S. Senate seat in 2016, the move to D.C. didn’t change much. Emhoff joined the law firm DLA Piper, but he was still an anonymous figure who could go to the grocery store, attend Dodgers games and live a relatively normal life.

Emhoff and his ex-wife Kerstin Emhoff have been close friends and co-parents since their 2008 divorce; he remained her lawyer and business adviser until he gave up his law practice before the Inauguration in January. By all accounts, theirs is a thoroughly harmonious blended family. Still, Emhoff has grown since his first marriage. He now tries to “listen more than you talk,” he says, and Kerstin says he does things with Harris, like plan couple’s trips, that he didn’t before. “Of course he’s a better husband, and that’s great,” Kerstin says. “That’s how it should be.”

Kerstin says Emhoff was always supportive of her career during their marriage. But being the spouse of a presidential candidate requires a different level of cheerleading. During Harris’ short-lived run, Emhoff was rarely without a T-shirt bearing his wife’s name. Former campaign staff recall he tended to be more digitally savvy than some of Harris’ advisers, often the first to see a particular Instagram post or a tweet about the campaign. (Once glued to Instagram, Emhoff now has “the phone of a 7-year-old,” he says, for security reasons.) His apparent glee at his wife’s accomplishments made him America’s favorite Wife Guy, partly because he seemed less closed-off than other political spouses. “In politics, you’re expected to be very guarded,” recalls Chasten Buttigieg, who became friends with Emhoff during the Democratic presidential primary. “But he would see me down the hallway and he would shout my name across hundreds of people.”

When Biden chose Harris as his running mate in August 2020, life “changed on a dime, without any time to breathe or reflect,” Emhoff recalls. Reporters were suddenly camped outside his condo. His living room filled with campaign staff toting boxes of binders. “It was just like a rocket ship.” Emhoff was thrust onstage into a carefully choreographed ballet of official duties, even though he’s still learning the steps.

At Biden’s Inauguration, for example, Emhoff briefly went viral for forgetting where to stand as he and Harris climbed the stairs of the Capitol. “They’re trying to explain to you, ‘O.K., you’re going to get out of the limo and walk up the stairs in this order.’ I’m like, ‘Oh, O.K., I got it,’” he recalls. “And I just got overwhelmed.” He went viral again during the President’s first address to a joint session of Congress, for waving at Speaker Nancy Pelosi and blowing kisses at his wife as the two women waited for Biden to enter. “I looked like Forrest Gump,” he says. “I’m just thinking, ‘O.K., nobody saw that.’” Everybody saw it.

But if Emhoff draws attention for his bumbling exuberance, his tenure as Second Gentleman has been mostly free of verbal gaffes. “Being a lawyer comes in handy,” he says. “I’ve been very cognizant of what comes out of my mouth.” His facial expressions are a different story. When I ask what he misses about his old life, he crosses his eyes and smiles, as if to say, a lot.

Emhoff visits a vaccination clinic at East Side High School in Newark to back the Administration's call for Americans to get vaccinated against COVID-19.
Landon Nordeman for TIME

If Emhoff’s newness gives him an unfiltered view from inside the White House bubble, it’s his maleness that makes history. All of his predecessors have been women—and usually women who were used to the political spotlight. Jill Biden had been through two presidential campaigns and spent decades as a Senate spouse by the time she became Second Lady; Karen Pence was first lady of Indiana before she was Second Lady of the United States. When I asked Emhoff if he had heard from “Mother” Pence, as her husband reportedly refers to her, his eyes flashed. “Mrs. Pence,” he snapped, has been “very gracious in giving advice.”

The role of Second Spouse traditionally involves historically feminized tasks, like hosting luncheons and selecting china. To that end, Emhoff says he is “learning about wallpaper.”

“Some of those things are genderized, where, ‘Oh, a man can’t pick wallpaper and pick china.’ Technically, in the reporting and flow charts, it all reports up to me,” he says. But, he adds, “I’m married to Kamala Harris, and she’s going to have some opinions on china and wallpaper.” So Emhoff usually narrows selections down to a few choices and then lets his wife pick. “I’m doing things that I probably wouldn’t have done,” he says, “because one: it’s part of the job. And two: it helps her.”

Still, Emhoff seems thrilled to find moments of spontaneity where he can. After the visit to the scenic Elizabeth river walk on his New Jersey trip, Emhoff comes across a gym class full of high schoolers doing yoga poses in their school uniforms. Having spent the day walking slowly where he’s told, and standing on pieces of blue tape for photo ops, he seems to sense an opportunity to finally have some fun.

“Should I downward dog this thing, or what?” he says. Then he joins the kids for a shaky tree pose as the cameras click. “I can’t hold this forever!”

Later, I asked the kids what they thought of Second Gentleman Doug Emhoff. They responded with a near unanimous chorus: “Who?” —With reporting by Julia Zorthian

The original version of this story misstated the year of Emhoff’s divorce. It was 2009, not 2008. 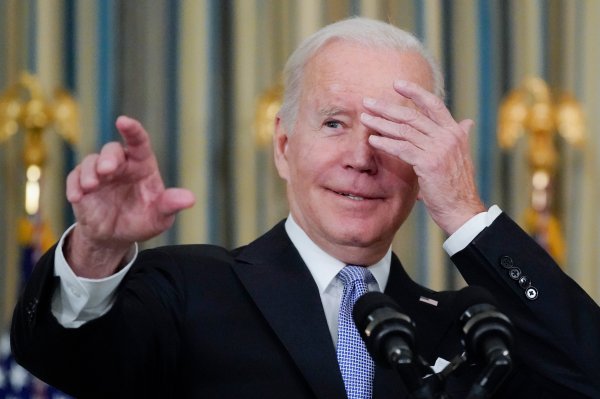