India's COVID-19 Crisis Is Spiraling Out of Control. It Didn't Have to Be This Way

Relatives carry the body of a loved one at a crematorium in New Delhi on April 27, as India endures the world's worst COVID-19 outbreak.
Saumya Khandelwal for TIME
By Naina Bajekal

Dusk is falling in the Indian capital, and the acrid smell of burning bodies fills the air. It’s the evening of April 26, and at a tiny crematorium in a Delhi suburb, seven funeral pyres are still burning. “I have lived here all my life and pass through this area twice a day,” says local resident Gaurav Singh. “I have never seen so many bodies burning together.”

Scenes of mass death are now unavoidable in what’s often called the world’s largest democracy. Social media is filled with images of body bags and urgent requests for medical aid. Indians gasping for breath are being turned away from overwhelmed hospitals, sometimes simply because they don’t have lab reports confirming COVID-19 infection. Health workers plead for basic supplies. “We feel so angry,” says Kanchan Pandey, a community health worker in Azamgarh, Uttar Pradesh. “At least give us some masks and gloves. Is there no value to our lives?”

At a crematorium in New Delhi on April 27, Shivam Verma, in white PPE, helps carry the body of his sister-in-law Bharti, 48, who died of COVID-19.
Photograph by Saumya Khandelwal for TIME

Such devastation would have been hard to imagine just a few months ago. Children were back in school, politicians were on the campaign trail, and people were dancing at weddings. “Soon the winter of our discontent will be made glorious summer,” India’s usually staid central bank said in a Jan. 21 bulletin. The next day, Prime Minister Narendra Modi heralded the spirit of atmanirbhar Bharat (self-reliant India) that had helped India secure victories in two major battles: on the cricket field against Australia and in the pandemic.

“A positive mindset always leads to positive results,” he declared. That ebullience did not fade even as epidemiologists noted that cases were starting to rise in a few key states. On Feb. 21, Modi’s ruling Bharatiya Janata Party passed a resolution unequivocally hailing the “visionary leadership of Prime Minister Modi” in turning India into a “victorious nation in the fight against COVID.”

Two months later, India’s crisis has blown well past the scale of anything seen elsewhere during the pandemic. For six of the seven days beginning April 21, India set new global records for daily COVID-19 infections, repeatedly surpassing the 300,000 tally previously set by the U.S. Its total confirmed cases—more than 18 million—are second only to that of the U.S. By official counts, more than 200,000 have now died, and some 3,000 are dying per day. The true daily death toll is at least two times higher, says Bhramar Mukherjee, an epidemiologist at the University of Michigan, from a caseload likely at least 10 times higher, based on modeling of data from the first wave.

India’s health system is on the brink of collapse. Hospitals across the country are running out of oxygen supplies, ventilators and beds. Indians are rushing to buy drugs like remdesivir, causing prices to surge, while labs struggle to process growing backlogs of COVID-19 tests. Its humanitarian crisis will not just be devastating for the country’s nearly 1.4 billion citizens. In the words of the director general of the World Health Organization, the pandemic is a global inferno: “If you hose only one part of it, the rest will keep burning.” In India, where crematoriums have been burning so long that their metal structures have started to melt, the hose isn’t even turned on yet.

When the pandemic swept the world last year, India braced itself. Modi announced a sudden national lockdown in March, sparking an exodus of migrant workers, hundreds of whom died en route from cities to their hometowns. India’s economy was one of the hardest-hit in the pandemic, and lockdown was eased in June to allow businesses to reopen.

Cases peaked around 93,000 per day in September—less than a third of the daily tallies India is reporting this April—and then the curve began to flatten. A narrative emerged that India may have quietly achieved herd immunity, thanks to its comparatively young population—the median age is 27, and just 6.4% of Indians are over 65—and the fact that 66% of its population live in rural areas, spending most of their time outdoors. That optimistic account has since been complicated by two facts: cases are now hitting the young, and also surging in poor, rural states like Bihar and Uttar Pradesh.

The scale of the current crisis may have been driven by more-transmissible variants, though data are limited because of a lack of widespread genomic sequencing, says Dr. Ashish Jha, dean at Brown University School of Public Health. Other factors are contributing to the surge. The virus moves quickly through the multigenerational households that account for 4 in 10 Indian homes. Chronic underfunding of the health system over decades has also left hospitals ill-equipped to deal with the surge.

India’s total health care spending is a mere 3.5% of GDP, far lower than in countries ranging from the world’s wealthiest like France (11.3%) and the U.K. (10%) to other emerging economies like Brazil (9.5%) and South Africa (8.3%). And only a third of India’s health care spending comes from the government, with the rest mostly coming out of citizens’ pockets. “It essentially means that those who can afford to purchase health can have it,” says Dr. Gagandeep Kang, a virologist and public-policy researcher at Christian Medical College, Vellore.

At a facility on the outskirts of Chennai on April 24, workers check medical oxygen cylinders that will be transported to hospitals.
Arun Sankar—AFP/Getty Images

For all those vulnerabilities, experts say the current crisis could have been avoided if the government had acted earlier. “It is the virus, but it’s way more than the virus,” says Sumit Chanda, an infectious-disease expert at Sanford Burnham Prebys Medical Discovery Institute in California. “It’s equal parts complacency and incompetence.” Many Indians who took strict precautions last year abandoned their masks and gathered indoors when the broader public messaging implied that India had conquered the virus. They were “pristine prey,” as Mukherjee puts it, when the virus resurged this spring.

Crucially, this complacency was encouraged by the government’s “mission-accomplished mentality,” Chanda says. India’s leaders ignored warning signs in the data and the news of variants circulating in other countries. “By early March, it was really starting to be clear, and by late March, we had flashing red lights,” Brown’s Jha says. “Even then, the government was largely acting like there wasn’t anything serious going on.”

Rather than intensifying public-health messaging and ramping up interventions like banning mass gatherings and encouraging mask wearing, Modi and his officials did the opposite. They held mass rallies ahead of elections and promoted the Kumbh Mela, a Hindu pilgrimage that drew millions of worshippers to a single town—an event Jha predicts will end up “one of the biggest superspreader events in the history of humanity.” On April 17, after India had overtaken Brazil to become the second worst-hit country in the world, Modi told a rally in West Bengal that he was “elated” to see such a large crowd.

Modi’s insistence on atmanirbhar Bharat, the principle of self-reliance, also made India slow to approve and purchase foreign vaccines, including Pfizer-BioNTech’s, in favor of its own Covaxin. In the meantime, the government was keen to wield its heft as the “pharmacy of the world,” exporting doses even as it vaccinated only 0.2% of its population per day. “The complete policy complacency created a scenario where we allowed COVID-19 to get the better of us,” says Yamini Aiyar, president of the Centre for Policy Research in New Delhi. “We couldn’t have predicted the scale, but the complete lack of preparedness and crowding in pursuit of power is really unforgivable.”

Though Modi has been reluctant to admit failures handling the pandemic, his tone has become more somber as India has started airlifting oxygen generators and other supplies from abroad, with countries including Australia, the U.K. and even India’s rival Pakistan offering support. The White House is sending ventilators, test kits, PPE and oxygen concentrators to Delhi, and has overturned a ban on the export of raw materials India needs to ramp up vaccine production. In the short term, this emergency disaster relief—along with lockdowns in hot spots and a national mask mandate—is key to curbing the second wave.

In the longer term, vaccinations are desperately needed to prevent a third wave. Only 9% of Indians have had at least one vaccine dose (some, like Covaxin, require two doses), and the current pace of inoculation is too slow. It’s also not realistic, says Dr. Prabhat Jha, an epidemiologist at St. Michael’s Hospital, University of Toronto, for India to try to rapidly vaccinate 1 billion people. With limited vaccine supply, the most effective way to reduce transmission may be to target hot-spot areas and higher-risk people—which means India needs better data, fast.

How India handles its internal crisis is already having spillover effects. Modi has suspended India’s vaccine exports and is looking to import doses from other countries. This will have critical repercussions for millions in Africa and Latin America, who depend heavily on India’s vaccine production. Serum Institute, the Indian vaccine manufacturer, was already running behind. Expected to deliver 100 million doses for other countries by May, it so far has delivered only 20 million.

India may be far less wealthy than the Western countries now lending support, but it also has the tools to emerge from this crisis. It has a history of successful, large-scale immunization programs for diseases like polio and tetanus, first-rate scientists, highly trained doctors and powerful networks of community health workers. What has been lacking, experts say, is the political will to get ahead of the crisis—and to use data and science to its advantage. “Without data—on who is testing positive, where the hot spots of cases and deaths are, who is really vulnerable—there’s no easy way for India to walk out of the pandemic,” Prabhat Jha says.

Many say the government has lost sight of its priorities. As cases soared to record highs in April, the government ordered Twitter and Facebook to remove posts critical of the authorities. Independent journalists have scrambled to identify massive discrepancies between official figures and deaths. “Those who died will never come back,” the Chief Minister of Haryana said in response to questions on April 26 about whether COVID-19 deaths were higher than official figures. “There is no point debating if the number of deaths is actually more or less.”

Modi entered the pandemic with sky-high approval ratings of nearly 80%, and polls from as recently as January suggest those numbers have barely dipped. Now, anger is rising among those spending their days trying to find beds for relatives or caring for their communities. But for most Indians, whether Modi can survive this crisis is now less urgent than whether they can. “The cries for help are growing—but not our capacities,” says Usha Thakur, a community health worker in Najafgarh, Delhi. “The governments are fighting amongst each other. They don’t care about the people but it’s the people who are losing their loved ones.” 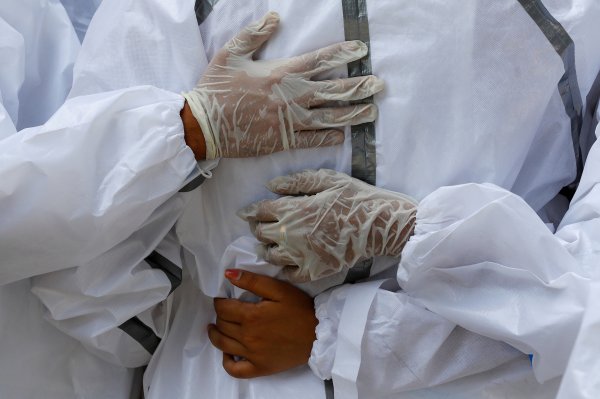