Photographs From the Inauguration of Joe Biden and Kamala Harris

Jan. 20 began on a much more somber note than Joe Biden could have predicted for the day he would finally become President of the United States. He was supposed to arrive in Washington, D.C. this week via Amtrak, his beloved method of public transportation. But security concerns after Donald Trump incited his supporters to storm the Capitol on Jan. 6 prompted Biden to switch plans and fly on a private plane instead. He spent the night before his inauguration visiting a memorial for the more than 400,000 Americans who have lost their lives to COVID-19 set up around the reflecting pool at the Lincoln Memorial, and the pandemic hung over the proceedings as the day began for his swearing in ceremony, too.

Four years ago, Trump introduced his tenure by telling an excited crowd gathered at the Capitol about the “American carnage” he hoped to reverse while the other half of the country watched with trepidation. This time, there are purposefully no crowds and fewer public events scheduled to limit the spread of the coronavirus. Instead, large portions of D.C. were locked down as the sun came up, and 25,000 National Guard members patrolled the city to help secure the day’s events.

Still, the day has plenty of pomp planned as Biden is expected to speak about uniting the country before he and Vice President-elect Kamala Harris take their oaths of office on the west front of the Capitol and then get escorted to the White House. In the afternoon, a “virtual parade” will showcase performances from every state and territory in the country and a primetime television event will cap off the evening, giving Americans at least some sense of spectacle to watch from their own homes.

Below, TIME’s photo editors select the best photographs from a day that is projecting twin images of a nation struggling to contain its chaos and an Administration aiming for a return to buoyant normalcy. 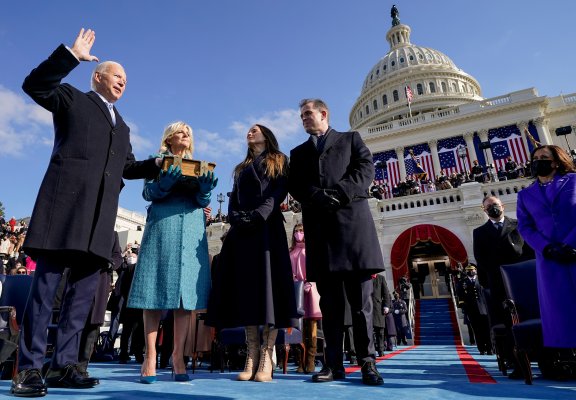 Biden Acts to Undo Trump Policies
Next Up: Editor's Pick