In the weeks leading up to COP26, the U.N. climate conference now in its final hours in Glasgow, youth climate activists consistently expressed dismay at the lack of progress decarbonizing the global economy. Negotiators from countries around the world seemed poised to rebuff the youth demands for a dramatic intervention to avert the worst of climate change, and, in doing so, condemn them to face the worst effects of climate change.

A week into the talks, Barack Obama arrived in Glasgow with a message of encouragement for the young climate activists: keep up the good work. Youth activists have moved the needle, “building power” and “raising awareness,” Obama told a group of young climate leaders on the sidelines of the conference, insisting that the slow movement was the result of the slow wind of the democratic process. “It is not just cowardice on the part of leaders that prevents them from meeting these goals,” he said. “It’s the fact that, at least [for] those of us who live in democracies, there’s not yet a full consensus.”

Two things can be true at once: the science shows clearly that humans need to rapidly decarbonize, and, at the same, political challenges on the ground in countries across the globe have metastasized, posing an impediment to the sort of widespread change that could truly keep climate goals alive. It’s a reality that’s come to head at COP26. Here in Glasgow, there is virtually no debate about where we need to go. That is, every country now acknowledges the need to essentially eliminate our carbon footprint, but at every turn domestic politics pose a barrier, from concerns about energy crises to highly-partisan domestic legislatures to fears about disrupting economic growth and the instability such a development might catalyze. “The politics within our various countries, at least those that are democracies, place constraints on even well-intentioned politicians,” Obama said.

But allowing domestic political concerns—as real as they may be—to get in the way of aggressive climate measures now signals deep trouble ahead. If governments can’t make reasoned policy now, how will they behave in the midst of the mass migration, extreme weather disasters and political anger that are now on the not-so-distant horizon?

Any consideration of the role domestic politics play in international climate discussions needs to begin with the U.S. The current U.N. climate regime has been constructed to match the needs of the world’s largest economy. In the early 2000s, American refusal to join the Kyoto Protocol effectively killed it. In its place (a decade and a half later), negotiators developed the Paris Agreement, a new framework designed—down to its punctuation—to meet the demands of U.S. politics. Most importantly, the framers of the Paris deal knew they were limited to an “agreement” rather than a “treaty” that would require U.S. congressional approval.

When President Biden took office earlier this year, the international community welcomed his administration with open arms after four years when the U.S., under Donald Trump, had largely withdrawn from international climate discussions. At the very least, Biden was seen as a good-faith actor committed to acting on climate change. But over the past year, the Biden Administration faced persistent questions from officials in other countries about the credibility gap of U.S. commitments: the administration was saying the right things, but it remained unclear what it could actually accomplish.

The dynamic is especially true when it comes to measures to finance climate measures in the developing world. In the final days of the Glasgow conference, the issue has emerged as a key sticking point—as it has been for much of the year. More specifically, some developing countries insist that the U.S. and other developed countries ante up commitments to pay the costs of climate change, in particular the costs of adapting to the effects.

President Biden and his climate envoy, John Kerry, have recognized repeatedly that the U.S. has a responsibility to help. But, as Obama suggested, it all boils down to domestic politics. Spending money requires action from a narrowly-divided Congress, and paying to help other countries address climate change isn’t exactly a political winner. Analysts and climate advocates say there are clever ways the U.S. could make up the gap, using its influence to push the International Monetary Fund to provide financing, for example. “There is a need for the U.S. to think creatively,” says Oscar Soria, a climate campaigner at the activist group Avaaz.

But no path comes without political risks. The U.S. has already increased its commitment to climate finance for the developing world this year, from the $5.7 billion announced in April to double that in September. Ahead of the September announcement, I asked Kerry why it was so hard to deliver a relatively small sum. “It comes at a tricky time when you’re trying to pass infrastructure and you’re trying to pass everything else. It’s just complicated,” he said. “So it’s not a huge amount of money… But people are apprehensive.”

Read more: The Youngest Negotiating Team at COP26 has a Message for Other Countries

U.S. domestic politics may have more influence on the talks than those in its counterparts, but it’s far from the only country whose positions are hindered by what’s happening back at home. In recent years, the European Union has played a key role keeping up climate momentum while the U.S. sat on the sidelines. This summer the E.U. laid out a concrete path to slash emissions in half over the next decade, for example, and it has contributed more than its counterparts to climate finance initiatives. But in Glasgow many observers have criticized the European Commission, the E.U.’s executive body, for not taking bolder steps to steer the talks. In September, Frans Timmermans, the top climate policy official in the E.U., gave me some insight into his own domestic political considerations. “We did more in financial terms than others, and I’m willing to plead with the member states of the E.U. to do even more,” he told me. “But I can only do that if others do their bit as well.”

People often put non-democracies in a different bucket and declare that authoritarian regimes can do whatever they want. But the reality is far more complicated. Leaders in China, for example, don’t face the pressure of the ballot box, but the country’s political stability is widely understood to rest on the promise of continued economic growth. Anything that might disrupt that growth is seen as a threat to the regime. It’s true, of course, that the oil economies in countries like Saudi Arabia enrich the country’s wealthy, but they also pay for the programs that feed and house ordinary people.

All around the world, even as countries make progress on programs to reduce emissions, there is growing recognition that the transition could pose a threat to political and economic stability if it’s not handled correctly. “You’re not going to manage to change the situation with the climate crisis without social justice,” Carlos Alvarado Quesada, the president of Costa Rica, told me in September. If you don’t focus on social justice, “you’re not going to recruit some of the people you need to have on board.”

Read more: Why the Larger Climate Movement Is Finally Embracing the Fight Against Environmental Racism

Grappling with those domestic concerns on the international stage would likely require a radical change. The annual climate conferences that take place under the umbrella of the United Nations Framework Convention on Climate Change are slow moving and tend to focus on the high-level direction of travel rather than the details of implementation. In Glasgow, some delegates are discussing whether there’s a need for a global framework that really digs into the details. One group, for example, is calling for a fossil fuel non-proliferation treaty that would create a system for easing the world off of fossil fuels while aiding the most dependent countries. “But we’re going to need international cooperation, because there are so many countries that are not in a position at all to stop expansion,” says Tzeporah Berman, who chairs the The Fossil Fuel Non-proliferation Treaty, “because literally, they’re just expanding [fossil fuel use] to feed their debt.”

It goes without saying that such a program has a long uphill battle before it could be enacted, but until international climate talks can reckon with domestic challenges facing each country, they will continue to be plagued by the need to placate the players pushing for the lowest common denominator, whether that be oil exporters trying to avoid reference to fossil fuels or big developed countries trying to limit their financial responsibilities.

Still, allowing those challenges to halt progress isn’t a solution. A report from Climate Action Tracker released on the sidelines of COP26 showed emissions rising 2.7°C if countries proceed only with the policies they’ve already enacted. The political challenges of that level of warming would very likely eclipse anything we worry about today. 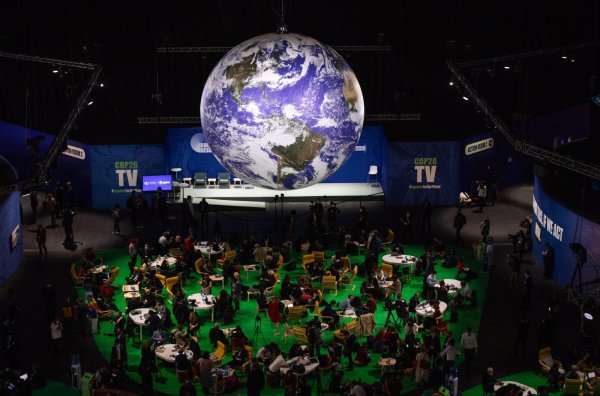 New COP26 Draft Has Surprisingly Ambitious Language on 1.5°C
Next Up: Editor's Pick