During the first week here on the ground in Glasgow, it was easy for COP26 attendees to feel like they were suffering from announcement overload. One hour, a country would commit to cutting its methane emissions. Another hour, a head of government would promise to expedite its renewable energy generation. And so on and so forth.

On Tuesday, more than a week after the official launch of the conference, COP26 delegates got a sense of how all those commitments have added up—and it isn’t pretty. Two new reports released on the sidelines of the conference suggest the commitments here at COP aren’t doing much to move the needle. Research from Climate Action Tracker and the United Nations Environment Programme both show the world is on track to warm 2.7°C over preindustrial levels under current policies. That takes into account new policies announced since the start of COP, like the U.S. climate spending included in the bipartisan infrastructure bill that passed Congress on Nov. 5.

That’s an alarming level of warming that would almost certainly trigger irreversible tipping points altering life as we know it—not to mention nearly twice the Paris Agreement target of limiting temperature rise to about 1.5°C. But there’s more nuance to the findings than the topline numbers may suggest. The reports should be a wake up call, but they don’t mean the talks have failed—at least not yet.

To understand the nuance, let’s look at the analysis from Climate Action Tracker.

The report presents four scenarios: In the most pessimistic, countries basically continue with their current policies, leading to that frightening 2.7°C number. In a middle scenario, where countries implement policies in line with 2030 emissions-reductions commitments, temperatures rise 2.4°C. The most optimistic scenario essentially assumes that countries are either taking emissions-reducing action today that they aren’t reporting (which is highly unlikely), or will suddenly move much faster on emissions reduction than they have been up to now (still pretty unlikely). In that case, temperature rise would be limited to 1.8°C.

Many activists and analysts, however, see those long-term pledges as largely irrelevant. Commitments to eliminate emissions by 2050—or later in the case of countries like China, India and Saudi Arabia—will only keep temperatures from rising to unsafe levels if they drive real action in the next decade. “There’s a massive credibility, action and commitment gap,” says Bill Hare, CEO of Climate Analytics. That is, there is a significant gap between what is pledged—actions that would limit warming to 1.8°C—and what has actually been implemented—actions that would lead to up to 2.7°C of warming.

Supporters of multilateral climate talks say this is where COP meetings have proven their worth. For example, just before the Paris COP meeting, the world was on track for 3.6°C of warming, according to a Climate Action Tracker report at the time. Commitments—undergirded by policy—have moved the needle. COP26 can similarly offer a venue for leaders to apply pressure to one another and hold each other accountable to their commitments.

But, like everything in the world of international climate talks, it would be an uphill climb. There’s no real possibility of driving enough new commitments to get to 1.5°C in the next few days, given that large announcements are almost always made by heads of government—most of whom left Glasgow after the first few days.

Indeed, after these two weeks of talks, creating a venue for new and deepened commitments may be the only way the world can credibly say the 1.5°C target remains alive. But you can judge the credibility of such an outcome yourself. If leaders couldn’t align their policies with 1.5°C in 2021, why will they in 2022? 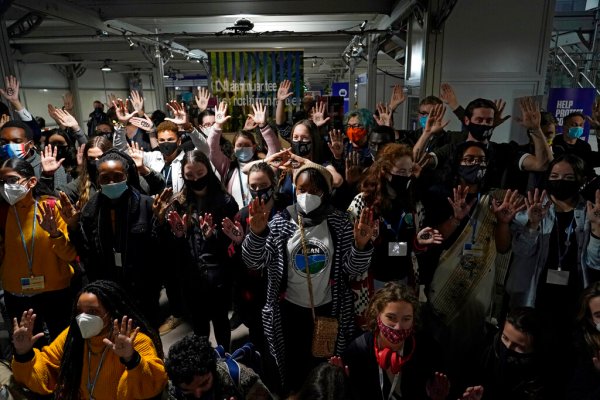 The First Draft of the COP26 Climate Agreement Shows How Far Apart Rich and Poor Nations Are On What Needs to Be Done
Next Up: Editor's Pick