Climate Change Used to Be a Bipartisan Issue. Here's What Changed

People march from the U.S. Capitol to the White House for the People's Climate Movement protest on April 29, 2017 in Washington, DC.
Astrid Riecken—Getty Images
By Justin Worland

In the midst of the 1988 presidential election, Republican presidential nominee George H.W. Bush made a campaign stop in Michigan to deliver a speech on a matter of great urgency.

A self-proclaimed environmentalist, Bush called for action to address the hot environmental topics of the day, like acid rain and deforestation, but he also used the platform to bring attention to a new issue: climate change, which was just breaking through to the public consciousness.

“Our land, water and soil support a remarkable range of human activities, but they can only take so much and we must remember to treat them not as a given but as a gift,” he told supporters in Michigan. “These issues know no ideology, no political boundaries. It’s not a liberal or conservative thing we’re talking about.”

Bush’s call for a bipartisan response to the country’s environmental challenges seems quaint today, when climate change can seem to be an intractably divisive issue in U.S. politics.

Over the past three decades, the scientific evidence underpinning man-made global warming has grown, with scientists now confirming the phenomenon with virtual certainty. But, in the same time period, climate change has evolved from a bipartisan cause of concern to a polarized political issue in Washington. Gradually, over time, ideological differences and an intricate campaign to discredit climate science led to a rift perhaps greater today than at any time in decades.

Scientists in the 19th century first introduced the concept of the greenhouse effect — the phenomenon by which certain gases created by humans trap heat in the Earth’s atmosphere — just as humans began to ramp up production and consumption of fossil fuels. By the 1960s, the concept had migrated from the pages of academic journals to the minds of policymakers. A 1965 report from President Lyndon Johnson’s scientific advisory committee warned that carbon dioxide emissions could trap heat in the atmosphere, though the prospect remained a far-off threat.

That attitude changed in the 1980s. As the science of climate change developed, media outlets began bringing scientists’ concerns into mainstream conversation. For the first time, in 1981, climate change made the front page of the New York Times. And, in widely televised 1988 testimony, NASA scientist James Hansen went before the Senate Energy Committee to say it was “time to stop waffling” on the issue.

“Global warming has reached a level such that we can ascribe with a high degree of confidence a cause and effect relationship between the greenhouse effect and observed warming,” he said, according to a Times report. “It is already happening now.”

Politicians on both sides of the aisle took note, with Bush and his Democratic opponent, Michael Dukakis, both promising an aggressive approach to the issue. Once in office, though many environmentalists argue that he pushed for a weaker version than was eventually created, Bush helped launch the international framework for addressing climate change — the United Nations Framework Convention on Climate Change — that would later lead to important agreements on the issue.

But the implications of addressing climate change did not escape the energy industry, even in the early days. It has been revealed that researchers at firms like Exxon studied climate change as early as the 1970s, though in the 1980s, the company cut funding for its climate research program.

In perhaps the most famous example of a concerted effort to affect the conversation about climate-change, in the 1990s the company backed a massive public-relations campaign that involved supporting groups like the Global Climate Coalition, which sowed doubt about the science behind climate change, took out advertisements to that end and lobbied elected officials. (Exxon has said that its actions were meant to fund “legitimate scientific observations” in light of “differences on policy approaches,” not to deny climate change.) Such campaigns were known about during the 1990s, with extensive reporting about how lobbyists groups hoped to scuttle international negotiations on climate change. The New York Times, for instance ran a story with the headline “Industrial Group Plans To Battle Climate Treaty” ahead of talks in Kyoto in 1998. In recent years, however, the issue has received additional attention thanks to series of 2015 reports in the Los Angeles Times and Inside Climate News, the latter of which was a Pulitzer Prize finalist for its reporting on the subject.

And the doubt was sown successfully — eventually, the idea that climate science was up for debate became a key talking point. And, in part because of the business-friendly reputation of Republicans, the party was a particular target for those questions, the answers to which would impact many industries. By the time of the 2000 election, climate change had become a partisan issue. In fact, polls have shown that in the years around the election, the percent of Republican survey respondents who believed the media were overplaying the seriousness of the issue increased.

And, though Florida rightfully receives attention for tipping that year’s election to George W. Bush, his opponent, Vice President Al Gore, also lost the state of West Virginia, which up until that point had been a Democratic stronghold. The loss has been credited to a concerted campaign to portray Gore as left-wing environmentalist who would eliminate coal jobs. A win in West Virginia could have made Gore president. (Gore’s new film about climate change, An Inconvenient Sequel, arrives in theaters on Friday.)

The second Bush presidency was not kind to supporters of action on climate change. Bush rejected the Kyoto Protocol, an international agreement on global warming negotiated under President Clinton (though it was unlikely that it would have passed the Senate). He also leaned heavily on industry voices to help with environmental policy and some scientists accused the administration of pressuring scientists not to speak on global warming.

The beginning of the Barack Obama presidency offered the first realistic opportunity to pass meaningful legislation addressing climate change. But the political atmosphere surrounding his election, with growing polarization and the rise of the Tea Party, had changed the mood. A wave of opposition made anything the White House touched — including curbing global warming — toxic for Republicans. And though the House passed legislation that would have capped companies’ emissions and required them to trade credits if they exceeded those levels, the measure was never voted on in the Senate as Democrats opted to instead focus on health-care reform.

And any hope of passing climate-change legislation quickly disappeared after the Democrats lost seats in the 2010 midterms. So, Obama instructed his agencies to create new regulations on the issue instead. During his presidency, the Environmental Protection Agency (EPA) issued nearly 4,000 rules, according to a House Energy and Commerce Committee report. The most significant — the Clean Power Plan — would have functioned as a cap-and-trade program in the power sector at the state level. The hasty rule-making angered Republicans, even some inclined to support measures to address climate change. Obama measures were easy to target for Republicans not only on substance but on procedural grounds.

Trump had previously expressed support for addressing climate change, but during his campaign he railed against regulations he said hurt American businesses. And, upon taking office, he began a vast effort to undo them.

Since then, with Obama absent from the picture, a glimmer of bipartisanship on climate change has re-emerged. The House Climate Solutions Caucus now has 50 members, 25 from each party. And some of the more controversial measures slowing action on climate change have been halted as a result of Republicans who broke rank.

But, nonetheless, climate change remains deeply divisive. Trump announced he will withdraw the U.S. from the Paris Agreement, and the EPA is reportedly gearing up to hold a televised event pitting mainstream climate scientists against climate change skeptics.

And the ’80s seem still a distant memory. 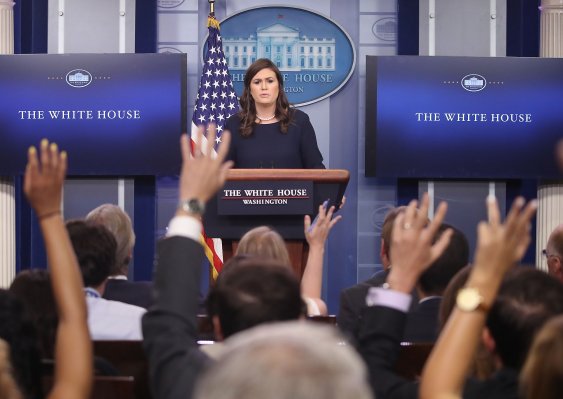 The Internet Can't Stop Roasting This Kid's Letter to President Trump
Next Up: Editor's Pick