Why Princess Diana Is So Hard to Get Right Onscreen

For a brief time we knew her as Lady Di, and for a longer span as Princess Diana. But in the end, whether you loved or loathed what she stood for, no appellation felt adequate. By the time the former HRH the Princess of Wales died in a car crash in 1997, at age 36, she had become just Diana, one name with a complicated set of ambitions, joys and disappointments folded within its petals. You can adore her or decry her as a wily social climber. The one thing you can’t do is stop looking at her: 24 years after her death, her specter is finding life everywhere, on TV, in the movies and on Broadway. In our imaginations, at least, Diana is more alive than ever.

She is also more mysterious, an enigma worthy of exploration, something many of us didn’t feel about her 10 or 20 years ago. For a long time—the tragic nature of her death aside, a terrible fate for any human being—it was easy to take her for granted, even to roll your eyes at her a little. As a royal, she looked fantastic in clothes—but didn’t she also wear a pullover with little sheep knitted in, a fashion choice that, pre-grannycore, swerved a little too close to the jeering trend of the ugly Christmas sweater? And if the Diana story was in some ways incredibly sad—her Prince turned out to be a dud in the husband department, deeply in love with another woman the whole time—she was also canny enough to know how to play to her crowd. The “shy Di” Prince Charles first courted—a nursery-school helper with a habit of inclining her head such that her eyes were almost completely hidden by the blondish swoop of her bangs—later became a poised, polished young matron who publicly spilled royal secrets, avowing not-so-subtly that she had married into a family of monsters. Even if you had sympathy for her, the superstar-victim routine could be distasteful.

So how should we feel today about Diana? The buffet of choices is so large that she can be almost anyone we want. In 2016, Chilean filmmaker Pablo Larraín released Jackie, starring Natalie Portman, an intimate fantasy portrait of Jacqueline Kennedy. Now, with Spencer, Larraín attempts the same treatment for Diana, with Kristen Stewart as the tragic Princess.

Spencer takes place in December 1991, over a dismal Christmas holiday at Sandringham, the royal family’s country retreat, during which Diana decides to leave Prince Charles for good. But the movie feels less like a cry of the heart than a parody of a parody. Stewart’s Diana is so unpleasantly self-centered that she’d be a terrible guest at any Christmas affair. She’s late for every meal and complains, endlessly, that the family hates her and is trying to paint her as crazy. Meanwhile, she skulks about with her shoulders hitched to her ears, looking as if she’s about to pocket some of the royal silverware.

A title card at the movie’s start informs us that Spencer is “A Fable from a True Tragedy,” and Larraín weaves in fairy-tale elements like so many threads of Lurex. Anne Boleyn makes a heavily symbolic appearance at the royal Christmas Eve dinner table, one unfortunate Queen blinking a warning to a woman who seems headed for a similar fate. Stewart, generally a marvelous actor, plays Diana as a mannered doe—the performance is packed with calculation and guile. Larraín may be trying to dive into the satin-and-sadness psyche of a misunderstood and persecuted woman. But he inadvertently turns this Diana into exactly the thing the royal family accused the real-life Diana of being: a willful and pouty complainer, or, worse, a megalomaniac. With friends like these, Diana doesn’t need enemies.

Spencer is heavily engineered to be one of those classy movies that wins awards. But the song-and-dance extravaganza Diana: The Musical is more like a work that Diana herself—known to be a fan of spectacles like The Phantom of the Opera—would warm to. The show—with music and lyrics by David Bryan and Joe DiPietro, and a book by DiPietro—was set to open on Broadway in spring 2020, before the pandemic brought the curtain down. The live show will finally go on as planned this November, but there’s a filmed version of the production available to watch right now, on Netflix.

Jeanna De Waal as Diana in Diana: the Musical.
Netflix

Is Diana: The Musical any good? Not exactly. The early numbers, especially—during the part of the show that details the meeting and courtship of the young Diana and her Prince-to-be—are bright, cheerful and chirpy. The show’s star, Jeanna de Waal, bursts onto the stage with a peppy-Princess number about being underestimated, which just happens to be called “Under-estimated”: “Your prison has been built/ your downfall’s been devised/ Won’t they be surprised/ when you’re underestimated?”

The whole thing feels a bit self-helpy, cheerleaderish. But in a strange way, Diana: The Musical—an effervescently pro-Diana entertainment that also acknowledges how much the young Diana craved the spotlight, only to be burned by it—is a more honest work than Spencer. There’s nothing arty or arch about it; you can imagine Diana herself humming the songs, tickled to see her own reflection in them, and pleased as punch that she could inspire a Broadway show. Who wouldn’t like that kind of fame, rendered in a sweet, harmless form—especially Diana, who was first made famous by photographers and then, years later, almost literally hounded to death by them? A Broadway musical, even a silly one, isn’t the worst memorial for a woman who came to be known as the People’s Princess.

Read more: The Crown Doesn’t Fully Explain Why Princess Diana Was So Popular. Here’s How She Became a Global Celebrity

Yet of all these recent portrayals, it’s Emma Corrin’s, in the fourth season of Netflix’s fiction-based-on-fact drama The Crown, that comes closest to capturing Diana’s opalescent mystery. Corrin’s Diana first appears as a schoolgirl dressed as a tree sprite for a student production of A Midsummer Night’s Dream. Charles (Josh O’Connor) has come to the family home, Althorp, to pick up her older sister Sarah for a date; he spies the young Diana sneaking around in her tights, an awkwardly gamine adolescent who’s trying not to be seen—and yet clearly, desperately, wants to be seen, especially by a real-life Prince.

Emma Corrin in Season 4 of The Crown.
Netflix

This scene is marvelous for the way it asks—without necessarily answering: Had Diana been scheming, from a young age, her way into the royal palace? And then comes the kicker: So what if she had? It’s common for young girls to yearn for fame, to dream of being acknowledged as charming and beautiful, to want to be seen. Corrin, so mischievous and flirty in those early scenes, helps us see that ambition in the very young Diana. But we also see how, just a few years later, that delight gives way to a particularly cruel disillusionment. In The Crown, days before the royal wedding, Diana discovers that her fiancé has recently designed a gold bracelet as a “farewell” gift for his not-really-an-ex, the married Camilla Parker Bowles. (Though The Crown is fictional, this anecdote is essentially factual.) The future Princess sees she has been betrayed; she wants to back out of the marriage, but it’s too late.

The Crown shows the stricken bride in that puffy merengue of a wedding dress. Corrin’s Diana looks so very small; as seen here, that dress—at the time a sigh-worthy symbol of fairy-tale fantasy—may as well be a white wolf eating her alive. Young Diana Spencer got the prize she thought she wanted, and when she realized how hollow it was, she reinvented herself to fit into her strange, unhappy surroundings—and then reinvented herself again to get out. No wonder we have no idea who she really was; she died on her way to becoming that person, leaving behind a jumble of puzzle pieces that will never be an easy fit. 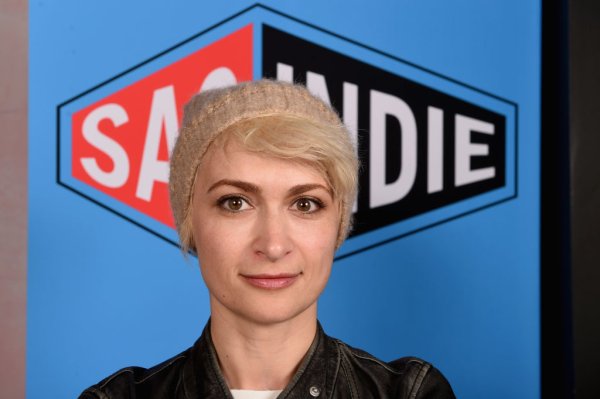 Alec Baldwin Shooting May Change Gun Usage in Hollywood
Next Up: Editor's Pick