How Princess Diana's Humanitarian Causes Have Fared, 20 Years On

Diana, Princess of Wales wearing protective body armour and a visor visits a landmine minefield being cleared by the charity Halo in Huambo, Angola
Tim Graham—Getty Images
By Tara John

The extraordinary life of Diana, Princess of Wales, not only humanized the British monarchy, but captured the world’s attention. And she harnessed that media frenzy to raise awareness of a number of progressive philanthropic causes.

Diana was known as a prodigious fundraiser and at one point was linked to more than 100 charities. Although she chose to cut ties with the bulk of them in 1996 to lead more of a private life after her divorce from Prince Charles, she remained the patron of six charities until her death on Aug 31, 1997. Her passing initially led to a funding shortfall for those charities, but they eventually received grants from the Diana, Princess of Wales Memorial Fund, which set up in response to public donations amounting to more than $100 million following her death.

Now 20 years later, here is what has happened to some of her biggest humanitarian causes:

Perhaps the cause most often linked to Diana is advocacy against landmines. Shortly before her death in 1997, Diana visited Bosnia and Angola, where she was pictured picking her way through a minefield in the Southern African country while wearing a visor and bomb-proof breastplate. “I’d read the statistics that Angola has the highest percentage of amputees anywhere in the world…that one person in every 333 had lost a limb, most of them through land mine explosions” Diana told the press in Angola, which was captured in the documentary Heart of the Matter. “But that hadn’t prepared me for reality.”

James Cowan, CEO of the mine-removal charity the Halo Trust, credits the Princess with the success of the Ottawa Mine Ban Treaty, which opened for signatures months after her death in Dec. 1997. The international treaty, which has been signed by 122 countries, prohibits the use, stockpiling, production and transfer of landmines. The Halo Trust, which cleared the minefield Diana walked through, has removed more than 92,000 landmines, 800 minefields and 162,000 shells, bombs and missiles in Angola since Diana’s death. Even though the country’s two-decade-long civil war is long over, the legacy of landmines remain.”The bad thing is only a third of landmines in Angola has been removed” Cowan tells TIME.

Prince Harry now works with the Trust to further the campaign made famous by his mother. He warned in the 2017 speech that more needed to be done to fulfil the Ottawa treaty. “In 2015, global deaths and injuries from landmines reached a ten-year high; but perhaps more shocking is the fact that almost 80% of them were civilians” Harry said. “Such tragedies undermine the promises made by the world twenty years ago; too many communities remained shackled in a cycle of poverty and fear.”

The world is far from free of landmines, however. Cowan says there are 64 states and territories affected by mines, cluster munitions and improvised explosive devices (IEDs), which come from a mix of old conflicts and new. He warns that extremist groups like ISIS and Boko Haram are exacerbating the problem by laying down more IEDs. “The first challenge is to take out old landmines in countries like Angola, Cambodia” he says. “But to also turn attention to the new conflicts causing so much suffering.”

BRAZIL - APRIL 24: Diana, Princess of Wales visits a hostel for abandoned children in Sao Paulo, Brazil, many of them HIV positive or suffering from AIDS
Tim Graham/Getty Images

The world was terrified by the Aids epidemic in the mid-80s. Fed by ignorance and misinformation, people did not touch sufferers due to the mistaken belief that HIV could be transmitted through contact. In 1987, Diana opened Britain’s first Aids ward in London, which only cared for patients with the virus. It was there that she shook hands with an Aids patient without gloves. She became the first high-profile celebrity to do so in order to challenge the stigma that the virus could be passed by touch.

Prince Harry, her youngest son, shares his mother’s activist streak and in 2016 he underwent testing for HIV live on Facebook, which reportedly led to a surge free, at-home HIV-testing kits. A week later, Harry warned against the “risk of complacency” in fighting the illness during an Aids conference in South Africa on July 2016.

Diana remained the patron of the Leprosy Mission England and Wales till her death in 1997. In a bid to dispel the myth that the illness could be spread by touch, she was filmed in 1989 shaking hands and touching the bandaged wounds of leprosy patients on her first visit in Indonesia, according to the Leprosy Mission.

Leprosy is not highly infectious and a multi-drug therapy cure has been available since 1981.The disease causes lumps and sores form on the skin, and if left untreated, can cause limb deformities and nerve damage. Diana continued to raise awareness about the severe skin condition by visiting leprosy hospitals and missions in Nepal, Zimbabwe, and India. “It has always been my concern to touch people with leprosy,” Diane once said according to the Leprosy Mission. “Trying to show in a simple action that they are not reviled, nor are we repulsed” she said.

The World Health Assembly declared in 1991 to eliminate the public health problem of leprosy by 2000. Leprosy has since decreased from 5.4 million cases in the mid-eighties to a few hundred thousand today, according to WHO statistics. But experts speaking to the Guardian believe the reported number of new leprosy cases is short of the true total— which could be in the millions. WHO says that stigma surrounding the disease is still prevalent and urged for “zero discrimination” and “inclusion” in order to help patients come forward for diagnosis and treatment.

Diana was an advocate of Centrepoint, a charity that helped young and homeless people off the streets, by becoming its patron in 1992. Her work at the charity involved helping youth between the ages of 16-25 find shelter, food and a job. She also took her sons, Prince William and Prince Harry, to the charity’s shelters. In 2005, William became the patron of Centrepoint. He even slept rough in 2009 on the streets of London telling the Telegraph at the time: “My mother introduced that sort of area to me a long time ago. It was a real eye-opener and I am very glad she did. It has been something I have held close to me for a long time.”

The charity says they helped 125,000 homeless young people since the late 60s, with 88% of all young people coming through Centrepoint moving on “positively.” The charity’s youth homeless databank found that in 2015 around 150,000 young people in Britain approached their local authority for housing help, but a third would be sent away without support. The research suggests that the true scale of the problem has been more than five times greater than the number suggested by the Government statutory homelessness figure.

“Thanks to Princess Diana’s work with Centrepoint, people are not only more aware of our charity but the issue of youth homelessness,” Centrepoint chief executive, Seyi Obakin, told the Scotsman. “As patron she showed just how many young people need help, vital support continued by Prince William who has followed in her footsteps. Youth homelessness remains a serious problem for society… with youth unemployment at record high levels, young people now face even greater challenges in leaving youth homelessness behind.” 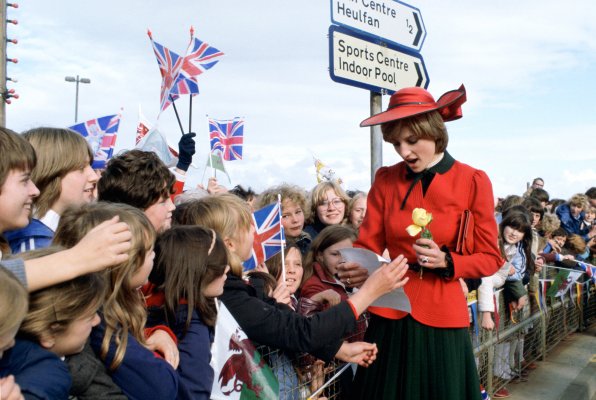 How Diana Became Britain's 'Queen of the Heart'
Next Up: Editor's Pick