On Sept. 13, Monica Rizzolli sat in her room in São Paulo and watched her net worth grow by $5.4 million in 48 minutes.

Rizzolli is not a day trader or a gambler. She’s an artist whose work consists of sun-kissed petals and wind-whipped blizzards, all created digitally. That day, she was selling a 1,024-piece collection in an auction on the NFT art platform Art Blocks. And despite her relative lack of renown outside of Brazil, the response was emphatic, with collectors shelling out thousands while feverishly discussing color and pattern on the social-messaging app Discord. “Haven’t seen any where the colors don’t blend perfectly,” wrote one.

Rizzolli’s success in that September auction is just one of many examples that disprove the epitaphs written for the NFT market after it receded from its dizzying peak this spring. In March, the artist Beeple sold an NFT collection for $69 million at an auction at Christie’s, provoking astonishment from the outside world. Many were quick to write it off as a blip when the market shrank in May, dropping 90% from its peak. “Who could have seen this coming other than basically anyone?” the website Gizmodo taunted.

But the death of NFTs was greatly exaggerated. After lying dormant for a couple of months, NFT sales exploded in August, hitting twice the levels of the first NFT mania back in the spring. Legacy institutions like Visa, Marvel and Major League Baseball jumped into the game, bestowing legitimacy; celebrities like Tom Brady and Doja Cat hypercharged excitement with their own ventures.

None of this came as a surprise to those who have been involved in the cryptocurrency space for years. The market, like many others, is inherently choppy, with vicious boom-and-bust cycles that have investors hanging on for dear life, even in boom times. As the NFT art world grows in fits and starts, entrepreneurs, technologists and artists like Rizzolli are taking on the messy work of building a different kind of space: one that prioritizes artists, technological and aesthetic breakthroughs, more resilient systems and community building. NFTs have already spurred the popularity and growth of a fascinating digital art form—generative art—and shifted the discussion around artists’ rights and royalties.

Read More: Digital NFT Art Is Booming—But at What Cost?

But while there has been astonishing innovation, other entrenched frameworks have proved harder to disrupt, with wealth still pooling in the hands of a few, and women and artists of color struggling to find their footing. “White men have the advantage from the very start in crypto; it’s obvious that they’re the first to build up the space,” the Panamanian artist Itzel Yard says. “This time around, we have an opportunity to flip things around and bring more balance into the system.” This fight for balance—between those focused on wealth and those focused on radical change—will continue as the technology hurtles toward mainstream adoption.

Vintage Mozart’s The Children With No Name: Eden sold for about $900 in July
Courtesy Liam Vries

At its base level, an NFT, or nonfungible token, is simply a file type. But unlike a traditional PDF or JPEG, NFTs are “minted” on the blockchain—a tamper-resistant, decentralized digital public ledger that also supports cryptocurrencies like Bitcoin and Dogecoin. And each NFT is unique, with a bit of code that proves its authenticity, making it easier than ever to put a value on digital goods. Over the past year, NFTs have been made out of basketball trading cards (NBA Top Shot has raked in $720 million), music (Kings of Leon made $2 million from NFT sales on an album) and a tweet (Twitter co-founder Jack Dorsey’s first, for $2.9 million). TIME also recently launched an NFT initiative, selling works by selected artists.

This spring, art lay at the center of the NFT boom. But much of that art was, frankly, bad: shrines to cryptocurrency champion Elon Musk, 3-D emojis, mimicry of brand signifiers like Gucci or Marvel, conceptual gimmicks like a $1.3 million single pixel. “There are a lot of people for whom the only context they have for NFTs are vulgar displays of wealth,” the technologist Mat Dryhurst said in March.

There are still plenty of crude art projects and buyers in it purely for the money. Dozens of cartoonish collectible series, for instance, have been created with the hopes of replicating the fervor surrounding -CryptoPunks, an immensely popular set of pixelated collectible characters. But many others are flocking toward a more ambitious medium: generative art, created by artists who tweak complex bits of code to create dozens or hundreds of works that riff on a theme. Artists use code to create psychedelic patterns, spastic glitchy videos, industrial landscapes and projection mapping.

Hundreds of those artists have found a home on Art Blocks. When Erick Calderon launched the platform late last year, he hoped to make crypto-art more financially accessible, showcase artists whose work would match the complexity of anything in the physical modern art world and cater to the cryptocommunity’s desire for scarcity and unpredictability. “I thought people would like the idea of performing part of the art process—and being presented with a tiny piece of the artist’s brain,” he says.

Read More: Teen Artists Are Making Millions on NFTs. How Are They Doing It?

Art Blocks has thrived: the platform raked in $243 million in sales in September, making it the most popular NFT art platform and the second most popular NFT platform overall during that time span, according to Crypto-Slam. Ironically, Art Blocks’ runaway success has made its curated auctions way too expensive for most aspiring collectors. But the community has still filled up with rabid devotees who aren’t buying up the art to simply flip it later.

One of them, Meredith Schipper, is an interior designer based in Houston with a lively side hustle as an NFT collector and trader with at least 90 artworks to her name. Schipper minted one of Rizzolli’s works for 3.5 ethereum—or roughly $11,900 at the time of auction and far above the auction’s price floor—because she says she loved the artwork and was sick of missing out in the past. “In previous auctions, entire collections have been minted in under two minutes,” she says. Of her experience in the NFT space, Schipper says, “It’s probably the greatest thing that’s ever happened to me. Everyone’s so positive; it makes me feel special and awesome.”

Nearly 5,000 miles away in her São Paulo home studio, Rizzolli didn’t even realize she was about to make a fortune. “I’m laughing to myself,” she said a couple hours later. “I hope I will be able to dedicate myself much more: to have good equipment and tranquility. I also want to develop something in the educational field here in Brazil—to return some of this to the community.”

With increasingly impressive artwork emerging from the NFT space, gallerists and curators have scrambled to create new spaces to display them. Some of them are in the physical world: an early NFT gallery popped up in downtown Manhattan in April, and Art Blocks just staged its first physical open house in Marfa, Texas.

Others are attempting to coax curious outsiders into their virtual spaces. Schipper recently set up a virtual gallery, and has delighted in meeting other gallery owners on her pixelated block. Another hub for artists, NFT Oasis, can be accessed for free via an app or through a VR headset, and includes art walks through serene pixelated galleries and concerts from artists like Imogen Heap.

Across the board, NFT practitioners say that community is an essential draw of the technology: “It’s like a huge neighborhood where we all kind of know each other,” says Yard, who just a couple of years ago was walking dogs to make ends meet; she has since made $216,000 in sales on the platform Foundation. NFT artists like Yard connect on Discord and Clubhouse, and they have flocked to create decentralized autonomous organizations (DAOs), a relatively new type of organizational structure that many believe will be the Internet age’s answer to the LLC or the corporation.

But while some NFT enthusiasts see a vast, unlimited future, others—women and people of color in particular—have already hit familiar walls. Yard’s rise is a rare success story in an upper echelon dominated overwhelmingly by white men. “There’s a lot of collectors that think about this as a business—and they see white men as the more secure investment,” she says.

There isn’t ample data documenting race in the NFT art world, but one study indicates the space has failed to live up to the egalitarian economic promise inherent in crypto’s decentralized nature. For the past couple of years, the artist Sparrow Read and the data scientist Massimo Franceschet have been collecting data from the popular NFT platform SuperRare, and found that revenue generated on the platform has flowed toward a very small group of wealthy artists and collectors. As of June 15, 80% of the platform’s sale volume was dominated by 15% of the richest sellers.

“Everyone believes that everyone’s intentions were to create more equality, more opportunity for artists,” Read says. “It feels like nobody wants to say that we are not achieving that.”

Read More: NFTs Are Shaking Up the Art World—But They Could Change So Much More

While the larger NFT world skews very white and male, women and artists of color are forming their own communities to fight bias and create more opportunities. One of Yard’s friends and protégés, 17-year-old Diana Sinclair, co-founded the herstoryDAO in April for Black female crypto artists. For Juneteenth, they partnered with the NFT platform Foundation to put on an exhibit called “Digital Diaspora,” featuring artwork from prominent artists like Yard and Blacksneakers, with a portion of the proceeds going to charity.

But the auction failed to garner even half of what herstoryDAO had projected based on the previous value of the artists’ works. “It was really shocking: there was so much support on social media, but collectors weren’t keen to support us financially,” Sinclair says.

When the “Digital Diaspora” auction took place, the NFT market was close to its nadir: NFT art sales for that week were under $4 million, according to Nonfungible. Since then, however, that figure has increased steadily, hitting $84 million the week of Oct. 5. Virtually every other metric tracked by Nonfungible has also increased, including the number of unique buyers active at one time and the number of primary and secondary sales. A second-quarter study from DappRadar in September showed that mass adoption of NFTs is under way, lessening the reliance on deep-pocketed whales; gaming NFTs and collections like the Bored Ape Yacht Club have particularly thrived.

Sinclair believes that while the space has agonizing flaws, its communal nature and collaborative spirit could allow for positive change that might have been impossible in the traditional art and finance worlds. Concerns about the immense amount of energy it requires to mint an NFT, for example, have led to the creation of more energy-efficient platforms like Tezos and Palm, which are gaining in popularity. (Ethereum, too, has made its long-awaited conversion to a more energy-efficient system.) Groups that have formed in the past year—like the Mint Fund, Friends With Benefits and the African NFT Community—are using their collective power to create tools and grant funds for underresourced artists.

Sinclair is in the NFT world for the long haul, and hopes to learn more about investing so she can have more power in a world that up to now looks a lot like the old one. “The space is too new for anything to be solidified,” she says. “We have more ideas, more plans and a lot more work to do.” —With reporting by Julia Zorthian 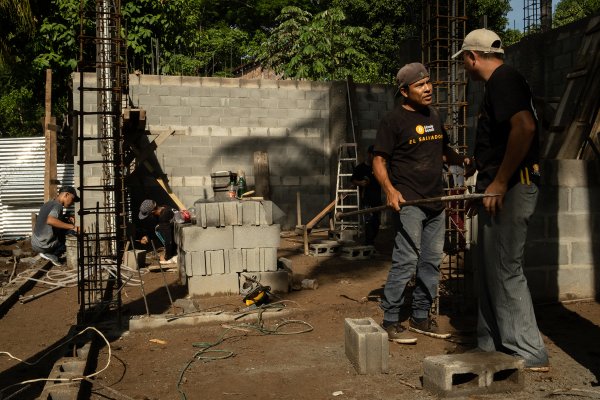 El Salvador's President Bukele Uses Bitcoin for a Rebrand
Next Up: Editor's Pick