The Story Behind TIME and Beeple's Future of Business Cover

Cover: Artwork by Beeple for TIME
Ideas
By D.W. Pine
D.W. Pine is the Creative Director at TIME.

For TIME’s cover story on the future of business and the digitization of everything—which accompanies our list of the 100 most influential companies—we turned the space over to an artist who’s been at the forefront of the digital art movement for more than a decade.

Artist Mike Winkelmann (aka Beeple) wanted to take our readers inside his “canvas” to depict the stratospheric acceleration of the digitization of our world by creating an image that focused on his artistic process. The cover image depicts his actual computer interface mid design, complete with a wireframe render of a figure interacting on the left and a more complete version on right. He created this digital world using Cinema 4D and OctaneRender software that is powered by nearly a dozen Nvidia graphics cards. (Nvidia was just named one of TIME’s 100 most influential companies.)

“With this artwork I wanted to show how everyone is becoming more digital as more and more of our interests and identity are moving online,” said the artist, who is based in Charleston, S.C. “People’s sense of self is quickly becoming a mix of real and virtual.”

Artwork by Beeple for TIME

Winkelmann, who spent more than a decade creating digital works of art every day and posting them online to his millions of social followers, famously sold a collection of those titled Everydays: 5000 Days for a record-setting $69 million as a non-fungible token (NFT) at auction house Christie’s on March 11. It was the third most expensive piece of art sold by a living artist, after Jeff Koons and David Hockney.

As writer Andrew R. Chow wrote in TIME this March: NFTs are best understood as computer files combined with proof of ownership and authenticity, like a deed. Like cryptocurrencies such as Bitcoin, they exist on a blockchain—a tamper-resistant digital public ledger. But like dollars, cryptocurrencies are “fungible,” meaning one bitcoin is always worth the same as any other bitcoin. By contrast, NFTs have unique valuations set by the highest bidder, just like a Rembrandt or a Picasso. Artists who want to sell their work as NFTs have to sign up with a marketplace, then “mint” digital tokens by uploading and validating their information on a blockchain (typically the Ethereum blockchain, a rival platform to Bitcoin). Doing so usually costs anywhere from $40 to $200. They can then list their piece for auction on an NFT marketplace, similar to eBay.

“People have been creating digital artwork for the last 20 years and it has just as much craft, message, intent, as anything made on a canvas and has just as much ability to affect people emotionally and intellectually,” Winkelmann says. “It has been exciting through NFT’s to see people start to realize the value of this type of work and I think we’re just at the beginning of the next chapter of art history.”

To follow up his Christie’s NFT drop, Winkelmann is releasing a Spring Collection on Friday, April 30 on the NFT site Nifty Gateway. 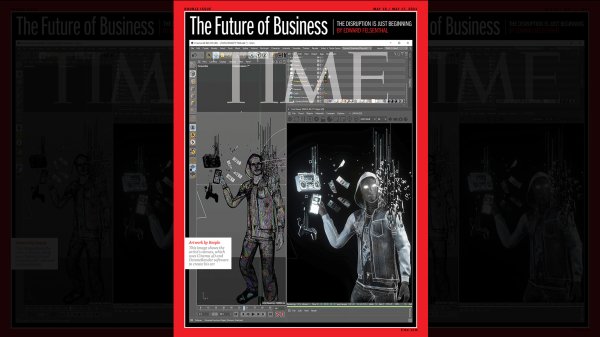 Every Company is a Tech Company Now. The Disruption is Just Beginning
Next Up: Editor's Pick