The Fight for a $15 Minimum Wage Is Our Selma

People gather together to ask  the McDonald’s corporation to raise workers wages to a $15 minimum wage in Fort Lauderdale, Florida,  on May 23, 2019.
Joe Raedle—Getty Images
Ideas
By William J. Barber II
Barber is president of Repairers of the Breach and co-chair of the Poor People’s Campaign: A National Call for Moral Revival. He is author of We Are Called to Be a Movement.

After the public lynching of George Floyd last summer, his cry of “I can’t breathe” galvanized a movement for Black lives that won majority support among Americans. Floyd wasn’t the only one gasping for breath. While Americans watched a police officer choke the life out of Floyd, we also witnessed Black Americans contracting a deadly respiratory disease at three times the rate of our white neighbors, according to an August report from the National Urban League. The growing public consensus that we as a nation must address systemic racism has led to serious soul-searching in families, churches, universities, corporations and political life.

But just as the Selma campaign became a symbol during the civil rights movement of the need for legislation to expand voting rights, the $15 an hour minimum wage proposal in Joe Biden’s American Rescue Plan represents the possibility that our government can take decisive action to make racial justice real today. Whatever the debates about costs and the procedures needed to make it a reality in the budget-reconciliation process, we must be clear: the fight for a $15 minimum wage is our Selma.

Though Southern activists worked to highlight Jim Crow’s subversion of the 15th Amendment throughout the civil rights movement, the Selma campaign in 1965 exposed a system of poll taxes and literacy tests that were designed to exclude African-Americans in the same way that “White Only” signs had kept them from water fountains and lunch counters. Without definitive federal action, local white authorities would have continued to use the power they gained through elections to deny Black people rights that the Constitution and the Civil Rights Act guaranteed them. Selma showed America that a Voting Rights Act was needed to make the promise of equality real.

In a similar way, low-wage workers have been organizing and striking to demand $15 an hour and union for the past eight years. The Fight for $15 has been clear all along that their demand for economic justice is also a demand for racial justice. In 2016, when the movement invited me to address its first national gathering in Richmond, Va., I wrote that “the economic injustice that keeps working people struggling in poverty is inextricably linked to America’s original sin of racism.” It has taken African-Americans 400 years to get from $0 to $7.25. We know we cannot wait any longer for a $15 an hour federal minimum wage.

Now, a majority of Americans know this too. Polls in late 2020 revealed that support for raising the federal minimum wage had grown to an unprecedented two-thirds of the country. This pandemic has exposed how racial inequality makes us particularly vulnerable. COVID-19 has spread through prisons where African-Americans are disproportionately incarcerated, through nursing homes where Black and brown health care workers could not afford to protect themselves and their families, and through frontline service work, where low-wage workers were again the most vulnerable. Just as Sheriff Jim Clark’s brutality exposed the violence of racism in Selma, the racial disparities of this pandemic make clear how Black and brown people are suffering in America today because they are not compensated equally for their work.

A Congressional Budget Office analysis of Biden’s plan says that raising the federal minimum wage to $15 an hour over the next five years would lift nearly a million Americans out of poverty. But the federal government’s definition of poverty is itself outdated. Almost 40% of Americans say they wouldn’t be able to cover one $400 emergency. A rescue plan that ensures them a living wage would fundamentally reshape the American economy.

Those who oppose raising the minimum wage will highlight its costs, both in terms of impact on the federal budget and potential job losses. Just as breaking America’s addiction to enslaved labor had real costs in the 19th century, paying workers what they deserve today will no doubt have real costs. But before we let the sticker price of any estimates scare us away from doing what is right, we need a serious accounting of what it has cost to sustain the current levels of inequality in this country.

No doubt, a considerable portion of federal spending to shore up the economy and fight COVID-19 over the past year could have been saved if our current levels of inequality had not set us up to be among the hardest-hit nations in the world. Trillions of stimulus dollars have further enriched corporations, many of which do not pay their workers a living wage. Putting more money in the hands of poor and low-income people would increase spending and stimulate the economy far more than investments used to shore up corporate profits. And any jobs lost in the market due to corporate cutbacks could be offset by other commitments to green jobs, infrastructure development and a federal jobs guarantee.

In this year in which we have lost nearly half a million parents, grandparents, siblings and neighbors to COVID-19 over the past year, we’ve also been reminded how much we all depend on the contributions of frontline workers. As we invest in a plan to rebuild our economy, we must commit to more just wages. We cannot honor essential workers without committing to pay them what is essential to survive in this country. Now is the time to raise the federal minimum wage to $15 an hour. 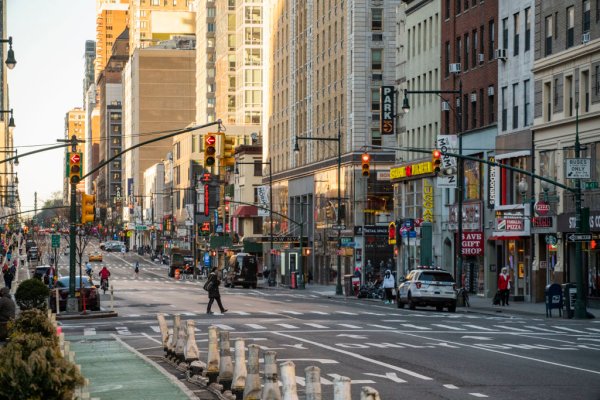 America's Cities Are in Crisis. They Should be Allowed to Raise Debt to Save Themselves
Next Up: Editor's Pick