Review: Leave No Trace Is a Beautiful Movie About Living on the Fringes

Debra Granik knows a great spider web when she sees it, and she knows a great face, too. Her finely wrought father-daughter drama Leave No Trace opens with a few snapshots from the natural world: Leafy fronds made translucent by the sun, moss drooping from a tree as if caught in a dead faint, some perfect samples of that aforementioned spider handiwork, each filament gleaming like a secret. (The cinematographer is Michael McDonough, who also shot Granik’s 2010 Winter’s Bone.) But the real showstopper here is a face, that of young New Zealand actor Thomasin McKenzie, who plays Tom, a teenager who lives in the woods we’ve just seen—actually a national park in the Pacific Northwest—with her father, Will (Ben Foster), a survivalist in the most essential sense of the word.

Tom and Will sleep under a tent by night but by day live beneath the trees, foraging for food that they’ll later cook with the help of a fire they’ve built themselves. Will can’t follow the dictates of society—he’s got to do things his own way, and his own way means raising his daughter alone in this forest that is really a park. The two are close, but not in an excessively talkative way. The bond between them is a kind of warm, unspoken respect. When Will hands Tom a stick for the fire the two are building, she starts shaving away at it with a small knife, scraping it into flame-friendly curlicues. This one is “good for feathering,” she notes, as if her father has just handed her a gift. All the while, we’re looking at this young woman—with her heart-shaped face, like a Victorian valentine, and her steadfast gaze—and thinking, She should be in school. She should have friends. How is she going to meet a boy, or a girl, she likes?

Will is teaching his daughter all he knows, or at least all he thinks he knows—and still, it isn’t enough. Leave No Trace—adapted by Granik and Anne Rossellini from a novel by Peter Rock—is a gorgeous story about adolescence, about basic human kindness, about separation and reconciliation, about the limits of what parents can teach their kids. It’s also about living on the fringe in this country not by necessity but by choice, although necessity may also have something to do with it—these two don’t have a lot of money, but they’ve figured out how to live on very little. Will is troubled, for reasons that the movie signals subtly enough, but he’s not as much of a weirdo as you might think. In case you’re curious, there are no grisly, tooth-and-claw hunting scenes in Leave No Trace, and there’s no horror-show sexual-impropriety angle—this movie isn’t about that. Instead, it uses this somewhat extraordinary father-daughter relationship to talk about ordinary things. Will is teaching his daughter to be self-sufficient, as he is, and to hide from people, as he does: He calls for impromptu drills to test how well she can melt into the forest, to elude capture by park rangers should it be necessary. He almost literally wants to erase himself from the world, even as Tom is aching to assert her place in it.

The tension between them is both wrenching and beautiful, and that’s key to the movie’s power. There’s no such thing as perfect love in families; often it’s the fine threads of tension that actually hold things together. Granik’s Winter’s Bone was greatly admired for the way it presented “ordinary people” of the Ozarks. But Leave No Trace is better. Even though the intentions of Winter’s Bone were surely pure, there was something sociologically voyeuristic about the way the movie presented those ordinary people, using tight close-ups to highlight every wrinkle and missing tooth: Ah, the simplicity of simple folk! As if being poor were by itself a kind a virtue that ought to be admired by city people.

But Winter’s Bone did introduce Jennifer Lawrence to the world, and when I think of that movie, it’s her face that haunts me. Granik has a gift for finding the right face to tell the story, and she’s done it again in Leave No Trace. McKenzie tells us everything about Tom with very few lines of dialogue: When she finds a rabbit loping along the side of the road, she scoops it up and finds her way to its owner, a sweet-faced boy (played by Isaiah Stone, also seen in Winter’s Bone and Andrea Arnold’s American Honey) who suggests that if she likes rabbits, she might like to come ’round to a local club that teaches kids how to care for them. The look on Tom’s face—of uncertainty, of yearning, of “Yes, I would like to be with other young people” and “Yes, I would like to learn more about rabbits”—says everything about youth, about wanting to define yourself as an individual but also wanting, in some way, to belong. To do that, you must step out of invisibility. Tom’s father has taught her well how to erase her tracks. She doesn’t yet know that the only way to live life is to leave them. 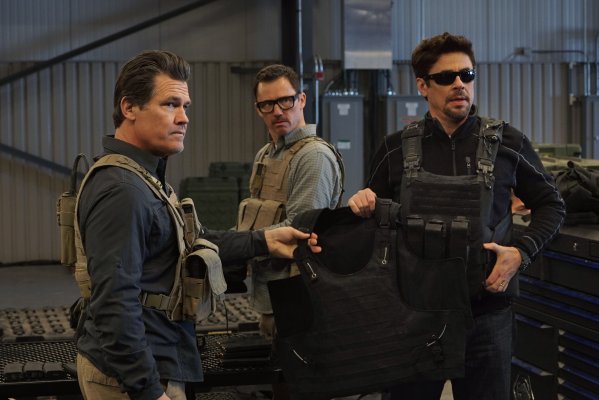 Sicario: Day of the Soldado Returns to the Border
Next Up: Editor's Pick