Bridget sits at home on the couch and pops four pills into her mouth, two inside each cheek. “I have to keep them here for 20 minutes,” she says smiling, her cheeks slightly bulging. She’s starting the process of a medical abortion. “Do I look cute?” she asks Jace, who she’s dating casually. “I feel cute.” It’s a low-key moment, and one of several scenes in Saint Frances, a recently released dramedy that treats abortion, and the complexities of motherhood and womanhood more broadly, with compassion and without stigma.

As several U.S. states undergo their own battles over abortion laws in the courts, a number of new independent films are taking a more quotidian, and decidedly human, approach to depicting the procedure and the decisions that lead up to it. Saint Frances isn’t just a story about abortion, it’s about Bridget’s bond with a six-year-old girl she starts nannying at around the same time that she terminates her pregnancy. Writer Kelly O’Sullivan, who plays Bridget, based the story partly on her own experience of having an abortion in her early 30s. “As I was going through that process, which was very simple and not very scary, I realized I had been miseducated about abortion through TV and film growing up and in my young adulthood,” she tells TIME. “I wanted to write a story where it’s a non-traumatic depiction of abortion. It’s ordinary and light and sometimes funny, and very realistic in its portrayal.”

Eliza Hittmann’s Never Rarely Sometimes Always, out March 13, also upends old narratives about abortion. Hittmann, who directed the 2017 Sundance hit Beach Rats, was struck by the story of Savita Halappanavar, a woman living in Ireland who died after she was denied a life-saving abortion in 2012. Halappanavar’s case was often cited by advocates as an example of why the country’s abortion laws needed to change, and a May 2018 referendum resulted in a lifting of the near-total ban on abortion there. “I started reading about the journey that women would take from Ireland across the Irish Sea to London and back in one day, and I thought to myself, that’s an untold story,” Hittmann tells TIME.

Never Rarely Sometimes Always transplants that journey to the U.S., where access in rural areas is more limited than in urban centers, and laws vary from state to state. Faced with several barriers to abortion access in Pennsylvania because she is a minor, teenager Autumn (Sidney Flanigan) decides to travel to New York to obtain a surgical abortion at a Planned Parenthood center. Initially, Autumn visits an unnamed crisis pregnancy center in her hometown, where the ultrasound technician, upon finding the fetal heartbeat, tells her “this is the most magical sound you will ever hear.” She is sent home with pamphlets about adoption, but the center’s staff don’t explain that abortion is an option for her, and she later learns that they misled her about how far along her pregnancy was. “For me, it was important for audiences to know that centers like this exist. They’re controversial because they’re federally financed, but they’re not medically licensed by any regard,” says Hittmann.

This new crop of films arrive as part of a broader shift over the last decade away from classic tropes about abortion. As sociologist Gretchen Sisson, principal investigator at the Abortion Onscreen program at the University of California, San Francisco, points out, early stories on film that dealt with abortion were cautionary tales that provided a kind of moral commentary on the pregnancy itself. Sisson compiled a census of all fictional American television shows and films to identify these representations, starting with the earliest depiction of abortion in the 1916 silent film Where Are My Children?, directed by Lois Weber.

The Hays Code (or the Motion Picture Production Code), which was originally published in 1930, enforced in films dating from 1934 and amended later in the 1950s, set strict limits on storylines involving abortion. The parameters of the code, which also regulated depictions of murder, adultery, miscegenation and the appearance of alcohol in films, led to characters who had abortions having unhappy endings, whereas characters who considered getting abortions and then decided against them had more positive outcomes.

The proliferation of television programming in the 1960s brought legal dramas and soap operas with abortion storylines, while the 1970s and 1980s saw more of a professional perspective on abortion. “You see a lot of stories about doctors making a decision about whether or not to provide an abortion, or stories about lawyers who are discussing access from a legal and policy perspective,” says Sisson. “The story of the woman actually getting the abortion is a subplot.” The 1990s and early 2000s often saw last-minute changes of heart, as with Miranda Hobbes’ (Cynthia Nixon) route to motherhood in Sex and the City.

“What we’re seeing now is much more focused on the woman’s experience, and much more of a focus on telling different types of stories for different types of women, so there’s much greater range of characters getting abortions across a greater range of genres,” says Sisson, pointing to the 2014 indie film Obvious Child, the 2015 road-trip film Grandma with Lily Tomlin and last year’s Hulu series Shrill as examples of comedies with abortion storylines. She also says showrunner Shonda Rhimes, who included abortion storylines in her shows Scandal and Grey’s Anatomy, has changed the script on the topic. Whereas an abortion might have singularly defined a female character in the past, she says, “It’s become part of a broader story arc for a character, it’s one small part of who that character is and what they do.”

Abortion is also a part of the coming-of-age story in the Harlem-set Premature, released last month. Played by Zora Howard, who co-wrote the script with director Rashaad Ernesto Green, Ayanna is a 17-year-old falling in love for the first time during her last summer before college. As with Saint Frances, Ayanna has an abortion, and though it’s difficult to watch, it’s treated as part of her character’s journey, rather than the whole focus of it. Similarly, the psychological thriller Swallow, released earlier in March, portrays a medical abortion, as protagonist Hunter (Haley Bennett) places the pills in her mouth while eating fast food in a shopping mall. Producers worked with Planned Parenthood consultants to ensure the depiction was accurate.

Still, while these films represent a move away from stigma toward many women’s reality, there is still a way to go before the representation reflects reality. Although around 60% of people who have abortions are people of color, according to data from 2014 compiled by the Guttmacher Institute, Abortion Onscreen’s 2019 analysis of abortion on television indicated that 65% of characters who obtained abortions were white. There are other missing stories to be told too. “Some of the most frequent reasons women get abortions is because they’re already raising children and don’t have the money to raise another child,” says Sisson. “That is a fairly compelling and sympathetic reason, but we don’t see those stories.”

There are also misunderstandings about the process itself on screen. A 2014 study by Sisson noted that 9% of fictional women who had abortions in American film and television from 1916 to 2013 died directly as a result of the abortion. In 2015, the year with the latest available statistics, 638,169 abortions and three abortion-related deaths were reported to the U.S. Center for Disease Control and Prevention, meaning the fatality rate for abortion-related deaths was close to 0%.

The research points to a number of representations of abortion elevating the process to a major medical procedure in ambulatory surgical centers and hospitals; notably, none of the four new independent films show this, and only Never Rarely Sometimes Always shows a surgical abortion. According to the Guttmacher Institute, medication abortions increased from 5% of all abortions in 2001 to 39% in 2017. Real legal battles on abortion have revolved around whether abortions should be required to take place in hospitals or ambulatory surgical centers, rather than freestanding clinics. “A lot of the patterns we see on TV are often cropping up as justifications or common misunderstandings in the broader public and political discourse,” says Sisson.

For Saint Frances writer and actor O’Sullivan, it was important to show Bridget as having complicated feelings about abortion — but also that guilt and regret were not among them. “She struggles with this idea of ‘I shouldn’t have to feel anything about having an abortion,’ which I totally agree with,” says O’Sullivan. “Whatever your experience is with it, that’s right. For some women it’s going to be a big deal and that’s right. For other women it will be a blip on the radar, and that’s right. I’m excited to continue to see stories where maybe abortion isn’t the main plot point — where it’s an event, not the event.”

The original version of this story misstated the fatality rate for abortion-related deaths. It is almost 0%, not 0.5%. 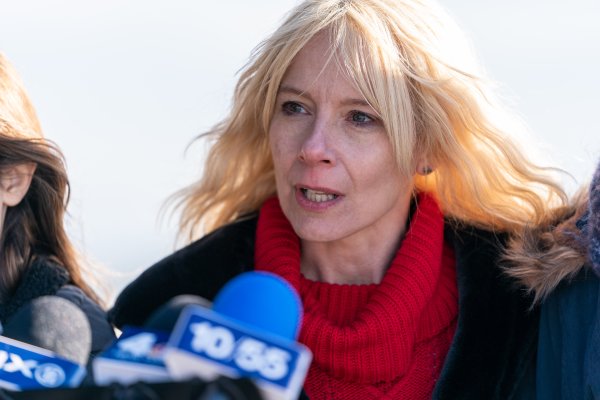 The True Story Behind the Netflix Movie 'Lost Girls'
Next Up: Editor's Pick