A Teacher’s Thorny Tale of Gender, Power and Consent Will Lodge Itself in Your Mind and Stay There

Every episode of the new FX on Hulu drama A Teacher opens with a content warning: “This series contains sexual situations as well as depictions of grooming that may be disturbing.” The closing credits direct viewers to a-teacher-resources.com, a website FX created in collaboration with the anti-sexual violence organization RAINN. The partnership has also yielded a PSA in which the show’s star, Kate Mara, informs us: “A Teacher is a fictional story, but its portrayal of abuse and trauma are real for many young people. It is never OK for a trusted adult to use their relationship with or authority over a young person to manipulate them into sexual activity.”

Although this framing—complete with terms like grooming, abuse and trauma—suggests a clear narrative of predation, A Teacher turns out to be anything but simple. In lean, half-hour episodes, the first three of which will debut Nov. 10 on Hulu, the series functions as a haunting thought experiment for a culture whose collective understanding of sexual misconduct has evolved quickly over the past three years. Yes, some industries have been purging themselves of their Kevin Spaceys and Matt Lauers. Harvey Weinstein, R. Kelly and Bill Cosby are in prison. Concepts once mocked as feminist hysteria, from rape culture to affirmative consent, have gone mainstream. Yet A Teacher shines light on areas of the Me Too discourse that remain murky. What if the criminal happens to be a tiny, pretty woman and her ostensible victim is a strapping male athlete? What if he’s past the age of consent and about to turn 18? What if he kisses her first? What if she’s not a master manipulator but an emotional wreck? What if they’re in love?

Creator Hannah Fidell, who wrote and directed much of the show, has been chewing on these questions for the better part of a decade, beginning with an independent film also titled A Teacher that premiered at Sundance in 2013. A slight feature at just 75 minutes, the original version joined a verboten sexual relationship already in progress between a reckless, immature, single, 20-something high school teacher (Lindsay Burdge) and her cocky, dominant male student (Will Brittain), culminating in an inevitable crisis when she can’t control her obsession with him. The show’s serialized format allows Fidell to develop more specific, detailed characters—and to stretch out their story over more than a decade, tracing both the origins of the central relationship and, crucially, its long aftermath. It also gives her space to explore ideas about gender, power and consent that have gained new urgency, with the sensitivity to survivors those topics demand.

To that end, FX’s A Teacher substantially revises the main characters. Mara plays the titular Claire Wilson, a new English teacher at Westerbrook High School in suburban Texas who’s struggling in her marriage. Her husband Matt (Ashley Zukerman), a musician turned medical-supplies salesman, is often away on business. They’re having trouble getting pregnant. “According to Instagram, we are the only people in our 30s without children and dogs,” Claire tells him, kidding but not kidding, in the premiere. She channels her frustrations into running, petty theft and teaching poems like Dylan Thomas’ “Do not go gentle into that good night.”

While his counterpart in the film is a jockish cypher—whose thin characterization unfortunately demanded more empathy for the predator than for her victim—Fidell writes Westerbrook senior Eric Walker (Love, Simon star Nick Robinson) with more depth. An attractive, popular soccer player surrounded by knucklehead buddies, he’s also a strong student with a single mom who spends much of his free time caring for his two kid brothers or working in a local restaurant. These responsibilities have given Eric a maturity that sets him apart from his idle, spoiled peers.

The grooming process begins, almost imperceptibly, when he asks her to tutor him for the SATs. And it feels, to both of the characters at least, like a two-way courtship. Most of the time, Eric seems to pursue Claire; she periodically tries to cut off extracurricular contact. Yet she must know she’s entering dangerous territory, because she starts lying to her husband about the private tutoring before their first meeting. And even before they start having sex, she also makes decisions that show shockingly poor judgment. The point of no return comes not with any particular physical act, but when she takes him on a UT Austin campus visit and they drink together at a kegs-and-eggs frat party. Fidell spends about half of the 10-episode series on the period before things start to come unraveled, which seems like a bit much. Every secretive, potentially scandalous affair—or sexually abusive relationship disguised as the latter—follows pretty much the same story arc.

A Teacher finally finds its purpose once Claire and Eric have been, very publicly, pulled apart. She’s initially a pariah, while at college he’s venerated as a folk hero. Fidell wisely lets trials and paparazzi bonanzas play out offscreen, which keeps the show from veering into Mary Kay Letourneau territory. But a decade is a long time. Their respective trajectories are both impossible to predict and completely believable. Eric is a wonderful character—a guy drafted by virtue of his good looks, laid-back demeanor and athleticism into sophomoric bro cliques, whose path to self-knowledge is tortuous. A veteran performer at 25, Robinson does justice to his developing identity, imparting multiple age-appropriate layers of depth: charm, intelligence, naivety, contradictory flashes of arrogance and fragility. (Mara does a fine job of portraying Claire’s selfishness and delusion, though I found Burdge’s chaotic turn more convincing.)

It’s no coincidence that Me Too started in the entertainment industry. Over the years, film and television have done plenty of harm in normalizing teachers’ abuse of their teenage students, particularly in cases where the adult is a man. Freeform thriller Pretty Little Liars, which ran for seven seasons beginning in 2010 and won armloads of Teen Choice Awards, notoriously depicted one such on-again-off-again relationship, often using English teacher Ezra’s (Ian Harding) intentions toward his student/girlfriend Aria (Lucy Hale) as a source of soapy suspense. Though it stirred some controversy at the time, it’s hard not to wonder about the level of backlash the show might’ve faced had it not concluded months before the Weinstein bombshell.

TV creators have to be more careful with these plots now, and that’s a good thing. It means more sensitivity to abuse survivors, fewer tongue-in-cheek deployments of Van Halen’s “Hot for Teacher” and a long-overdue obligation to educate younger viewers on this subject rather than using it purely as entertainment. The stories that result could be painfully didactic—which is just one good reason to simply stop revisiting the worn-out trope. (Those tempted to dismiss such a choice as political correctness might ask themselves why the student-teacher sex narrative is so prevalent in the first place.) But there’s little room for sanctimony in A Teacher. Fidell is less interested in hunting monsters than she is in drawing attention to how communities and the criminal justice system exacerbate high-profile sex crimes, and in revealing the myriad ways that trauma can stain two people’s lives. That it’s possible to inflict profound harm without harboring any malice is part of the tragedy. 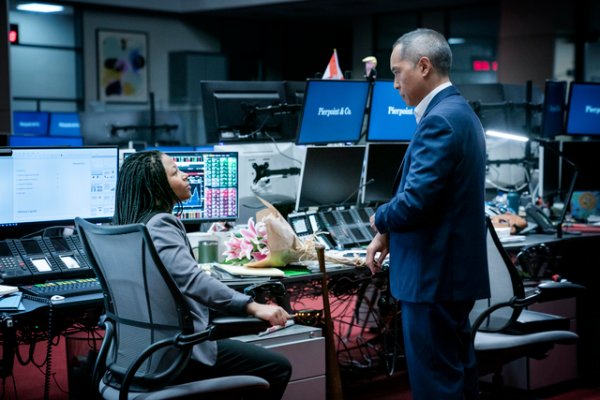 HBO's Industry Casts a Young Woman of Color in a Working Girl for a New Generation
Next Up: Editor's Pick