Anita Hill: I Didn’t Need Joe Biden’s Apology. What I Need Is His Commitment to End Gender-Based Violence

Anita Hill speaks during the New Rules Summit in Brooklyn, N.Y., on June 13, 2019.
Jeenah Moon—The New York Times/Redux
Ideas
By Anita Hill
Hill is a lawyer, academic and author, most recently of Believing: Our Thirty-Year Journey to End Gender Violence

In March 2019, I sat in a hotel room in Houston waiting for a conversation that was nearly 28 years in the making. The apology that in December 2017 Joe Biden told a journalist he owed me was about to happen—maybe. For more than a year, as other journalists asked Biden whether he had reached out to me, my partner Chuck and I played a game. Each time the doorbell rang unexpectedly at our home in Massachusetts, we would race each other to be the first to ask, “Could that be Joe Biden coming to apologize in person?” It was our way of making light of what had become an absurd standoff.

From my room on the 24th floor, as my eyes stretched across the Houston skyline, my expectations were pretty low. I was anxious and wanted a witness, but Chuck had stepped out of the room. The phone finally rang, and for 30 minutes Biden and I spoke. Mostly, he talked and I listened. He shared his regret for what I’d gone through during Supreme Court Justice Clarence Thomas’ 1991 confirmation hearings, which he chaired, and expressed his admiration for what I’d done to change the culture around sexual harassment in this country since then. His words were carefully couched, though seemed sincere. But one thing struck me: He never mentioned what the country went through with the hearing.

Yes, I suffered threats and insults during the hearing and immediately after I returned home. To this day I remain numb to offensive voicemail messages left on my office phone. I still live with the occasional misogynist, racist rant. But I’m not the only one who suffered from the hearing. Millions agonized as they viewed it. For 30 years in public and private, women have come to me in tears recalling that debacle. Men have expressed the disillusionment they felt for themselves and on behalf of their sisters, daughters and wives. Surely, Biden had heard from people whose spirits and faith in our democracy were broken as they watched. They too were entitled to some expression of his remorse.

Biden had started to remind me about his work to address gender violence when Chuck entered the room. The now-President considered the Violence Against Women Act one of his signature legislative achievements. He spoke with pride about his work with the White House Council on Women and Girls. Near the end of his time in the Obama administration, Biden was front and center in the It’s on Us campaign to end sexual assault on college campuses. In an op-ed carried by campus newspapers across the country, he wrote, “It is abundantly clear that we still live in a culture in which violence against women is allowed—even encouraged—to persist.” All are noteworthy efforts that have empowered victims and survivors and ultimately made them safer. But as we spoke, both Biden and I knew that the Supreme Court’s effective gutting of VAWA’s protections had gone unaddressed and that the number of assaults on campuses had continued to climb. More work is needed, I said. “Your past work uniquely positions you to make a difference.” Though I encouraged him to see ending gender-based violence as his calling, I’m not sure he heard me. (Representatives of President Biden declined TIME’s request for comment.)

Fortunately, I wasn’t emotionally invested in a Biden apology. Women are often told to accept an apology for bad and even brutal behavior for their own healing. For 28 years, I went through a process of repairing the harm done to me by the hearing. I did so by learning about sexual harassment and reflecting on the Judiciary Committee’s hostility to my testimony. Understanding that the problem was bigger than sexual harassment, and much bigger than me, gave me purpose and helped me heal. Looking back on it, a line from a gospel song I heard many times as a child stands out: “I wouldn’t take nothing for my journey now.”

Anita Hill testifies before the Senate Judiciary Committee, chaired by Joe Biden, on the nomination of Clarence Thomas to the Supreme Court on Capitol Hill in Washington, D.C., on Oct. 11, 1991.
Jeffrey Markowitz—Sygma/Getty Images

For three decades, I’ve had the benefit of learning from advocates who are championing the causes of gender violence victims through nearly impermeable criminal and civil court processes and workplace, educational, housing, social service and financial systems. I’ve had the privilege of hearing from survivors who have somehow found their way through agonizing abuse and failed response structures, and I’ve heard from victims, still struggling, who would be survivors if they could just get the empathetic support they need. I am so very sorry for the pain that the hearing put my family, friends and many others through and that I cannot assist all the people who come to me for help. I show my remorse by trying to prevent others from becoming victims. But I would not change my decision to testify. For the last 30 years, this has been my journey, and I expect it to continue for the rest of my life.

The public has come to expect politicians to apologize for their blunders, but very rarely are we satisfied with what they say, in part because the “apologies” don’t provide any fixes for the troubles they cause. When behavior, intentional or not, has negative, life-changing consequences for masses of people, mere words are not enough. I was very serious when I suggested that Biden take up the cause of solving the problem. We should expect the people in power to do all they can to ensure that the behavior they have perpetrated, defended or enabled through inaction doesn’t recur.

We are now in a period of reckoning with gender-based violence. It hasn’t penetrated our political or legal systems, but I believe that, like never before, the public is poised to embrace it. We should not let this moment pass.

Even when strangers are its victims, gender violence hurts all of us. The harm is not something that we can leave to our intuition to resolve. Many of our instincts about the problem are tainted by misogyny and our historic subjugation of women and attenuation of women’s worth. Our public processes and legal proceedings, as well as policies within workplaces and schools, should be grounded in facts used to define the depth of the problem, solutions to it and consequences for the violations, not “he said, she said” dismissals. We need to understand that a political agenda that relies on the suppression of more than half of the population is a threat to our democracy, no matter whose political career is at stake.

We need to collectively hear and see victims and survivors as central to any solutions we imagine. That means we must consider that not all victims are the same and that there is no “perfect” victim. In order to find victim-centered solutions to gender-based violence, we will need to address racism, including the vestiges of colonialism and slavery, along with homophobia, misogyny and gender bias. There must be accountability for harm, whether found in transitional or transformative justice or through a reformed criminal justice system. For this, I ask myself and others as a country where nearly one out of every 100 persons is in federal or state prisons or local jails, is incarcerating more people the sole solution to gender-based violence? The answer is no. But I believe that a reformed legal system must honor victims’ decisions to file criminal complaints, and we must honor the right of the accused to due process—both of which we have failed to do in far too many cases, especially those involving people of color.

We must hold ourselves accountable as individuals. As individuals we have choices, and we can and should choose not to engage in abusive behavior. Each of us must believe that our behavior matters and that we can bring about measurable change, small and large.

And, most crucially, we need leadership that holds itself accountable to end gender-based violence. On Jan. 20, 2021, Biden issued a memorandum to the heads of executive departments and agencies with direction that the goal of regulatory reviews in his administration will be to promote “public health and safety, economic growth, social welfare, racial justice, environmental stewardship, human dignity, equity and the interests of future generations.” Ending gender-based violence should be included on the list. Biden has also issued an executive order to advance racial justice and equity for underserved communities, and key to the well-being of underserved communities are the concerns of trans and nonbinary people and women of color to be free from gender-based violence. Eliminating this problem can contribute to all the public interests on Biden’s lists.

The President should be demanding that departments and agencies engage survivors or victims and their advocates to develop new initiatives deliberately aimed at ending violence and healing the harm it causes. To show his intentionality, he should elevate the urgency of this issue to the status it deserves by appointing a coordinator to work with the departments and the public and to report directly to him. We need a President and leaders throughout the country who believe it’s possible to end gender-based violence and who act in ways that reflect that belief.

As for me, my journey has brought me to the point of believing unequivocally that victims are truthful; that women’s lives have value; that ending gender-based violence is the only way to achieve true equality across all identities; that it can be ended; and that we all can play a role in that achievement.

Adapted from Believing: Our Thirty-Year Journey to End Gender Violence by Anita Hill, to be published on Sept. 28, 2021 by Viking, an imprint of Penguin Publishing Group, a division of Penguin Random House LLC. Copyright © 2021 by Anita Hill. 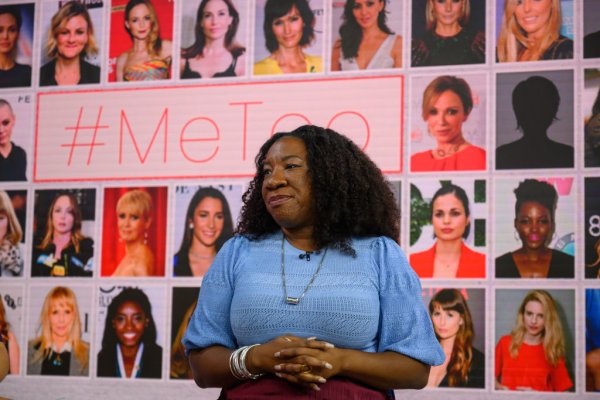 I Founded ‘Me Too’ in 2006. The Morning It Went Viral Was a Nightmare
Next Up: Editor's Pick