The last time we saw Jesse Pinkman, in the series finale of Breaking Bad, he’d just escaped a massacre. After refusing to put a mortally wounded Walter White (Bryan Cranston) out of his misery—an act that would’ve added one more item to the long list of sins he’d committed under the influence of the meth kingpin who used to be his high school science teacher—Jesse (Aaron Paul) drove the nearest El Camino straight through a chain-link fence, hit the road and never looked back. His symbolic shackles broken, he laughed and sobbed, his grizzled face filling the frame. By then, he was a traumatized, nearly feral mess. But he was free.

Unlike Walt’s inevitable death, Jesse’s ending was morally ambiguous: manipulated by a man who’d come to represent evil incarnate but still personally implicated in horrific violence, Jesse had also suffered terribly for his transgressions. Like Dorian Gray’s portrait, his face registered the blackening of Walt’s soul. So it seemed somewhat appropriate that Jesse’s fate remained unsettled. As Paul explained to TIME in a recent interview, “You’d like to think he’s riding off into the sunset, but you know life isn’t going to be that easy for him.” Sure, he made it out of five seasons alive. Surviving much longer, however, would be a test of his intelligence, resourcefulness and—most of all—his determination to live a better life.

Six years later, Breaking Bad creator Vince Gilligan is back with the results. The gripping El Camino: A Breaking Bad Movie, out now on Netflix and showing through Sunday, Oct. 13 in some theaters, picks up where the series left off. Jesse—who spent the episodes leading up to the finale in a box, held prisoner by the disconcertingly cheerful Todd (Jesse Plemons) and his gang—has to get out of Albuquerque before law enforcement can track him down. But first he needs to clean himself up, ditch the El Camino, scrape together enough cash to make a fresh start and say goodbye to the few people he loves whose lives Walt has spared.

His first stop is the home of his old friend Skinny Pete (Charles Baker)—a small-time criminal who is, predictably, in the midst of a video-game marathon with their pal Badger (Matt L. Jones). Despite its action-thriller pace and scale, one of the greatest pleasures of El Camino is that it still makes space for the funny banter that cut through the bleakness of Walter White’s descent. If Walt is Breaking Bad’s Richard III, Pete and Badger are its Shakespearean fools, cutting the tension with endearingly dopey exchanges like: “You couldn’t drive Miss Daisy.” “Whoever that is.”

Yet these early scenes, which ease viewers into a structure that braids Jesse’s efforts to skip town together with generous flashbacks that fill in crucial blanks from his past, aren’t just comic relief. They demonstrate how far our hero has drifted, over the course of the show’s two-year timeframe, from these simple screw-ups, who come off as disarmingly innocent by comparison. “You’re my hero,” Pete insists as Jesse staggers around the house in post-traumatic shock, devouring food like a wild animal and behaving as though a SWAT team might burst in at any second. Though they can’t possibly understand what he’s survived, the tenderness these guys show Jesse—who watched helplessly as his so-called partner Walt systematically destroyed just about everything that was good in his life—is heartbreaking.

Paul earned three Emmys for his supporting role on Breaking Bad, and in El Camino he delivers a mesmerizing lead performance that proves he deserves a spot on Hollywood’s A-list. (In truth, it should put him in the Oscar conversation, but this is a TV sequel distributed by Netflix that won’t meet the Academy’s eligibility requirements.) Fully re-inhabiting a role he hadn’t played for years, he endows Jesse with the same mix of (waning) goofiness and (escalating) existential terror that propelled him through the finale. Yet the movie, which contains as many nail-biting moments as the show used to spread over a full season, gives him something new to be: an action hero—albeit a uniquely conflicted, exhausted and in many ways broken one.

It’s to the credit of Gilligan, who wrote and directed the film, that it feels like a continuation of Breaking Bad without also feeling like merely an extra-long TV episode. It’s a true movie, with the taut pacing, satisfying conclusion and grand visual scale that distinction implies. The big screen does justice to the same detailed sound design and nimble camera work—replete with destabilizing effects such as scenes that open from bizarre vantage points or follow heretofore unknown characters—that made for one of the most cinematic series in the history of television. In place of the show’s deep orange mesas and azure sky, Gilligan offers desiccated, beautifully barren beige vistas, as though this city in the desert has been drained of all possibility for Jesse. Even if you have a Netflix subscription, this harsh splendor is worth the price of a movie ticket. (Whether or not you make it to the theater, please—please—don’t watch this on your phone.)

Aside from a few unnecessary character cameos, most of which you could easily guess but none of which I will spoil here, El Camino avoids the pitfalls of this year’s many feature-length sequels to TV shows. There’s little of the fan-service inanity that abounded in the Downton Abbey film and none of the sentimental self-indulgence of Transparent’s insufferable musical finale. Like AMC’s Breaking Bad prequel Better Call Saul, as well as morally flexible saloon owner Al Swearengen’s (Ian McShane) storyline in HBO’s Deadwood: The Movie, it completes the unfinished portrait of a character who remains on viewers’ minds.

There’s a unique potency to the connections we form with the fictional people on TV, which at its best combines the vividness of movies, the intimacy of books and the seriality of comics. Sometimes we remember them with the same wistfulness that colors our memories of friends with whom we’ve lost touch. That goes double for Jesse Pinkman, an audience surrogate who served as the tortured conscience of a criminal demimonde populated by milquetoast psychos (Walt, Todd, Gus Fring) and sad, irredeemably compromised men like Saul Goodman (Bob Odenkirk) and Mike Ehrmantraut (Jonathan Banks).

Joining a Breaking Bad Televisual Universe that is also a moral universe, one that weighs the soul of each protagonist in turn, El Camino makes space in the trilogy for hope. In Walt, Gilligan illustrated how a meek facade can conceal bottomless malice. Saul Goodman is what happens when a person with good intentions is incapable of following society’s rules. But going into El Camino, Jesse’s soul still hangs in the balance. In order to escape his old life, he’s going to have to prove that he’s smart and strong enough to make it on his own. And we can’t help but worry for him—in part because it’s so easy to imagine ourselves behind the wheel of that getaway car. What choice do we have but to see his story through to the end? 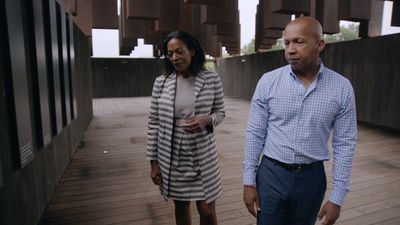 Discovery Docuseries Why We Hate Is Essential Viewing. It's Also Deeply Flawed
Next Up: Editor's Pick