No One Handles an Emmys 2018 Snafu Like Kirsten Dunst

Kirsten Dunst made a return to the spotlight on Monday night at the 70th Primetime Emmy Awards — but perhaps not quite the way she expected.

After garnering praise on the red carpet, the new mom — with beau and fellow Fargo actor Jesse Plemons in tow — had a bit of a snafu inside Los Angeles’s Microsoft Theater when, midway through the show, she apparently had difficulty finding her seat. Not to worry; Dunst and Plemons simply crouched down in the aisle, committed to staying in a central location for the evening.

“Couldn’t find our seats,” Dunst captioned an Instagram photo. The picture: a screen grab of The Marvelous Mrs. Maisel actress Alex Borstein making her way to the stage to accept her award for Outstanding Supporting Actress, while behind her in the background Dunst and Plemons can be spotted in crouched position in the aisle. Not every celebrity would be willing to drop down to the ground to avoid upstaging a fellow actor for their big moment, so kudos to Dunst and Plemons for being so accommodating in their time of confusion. And not every celebrity would also go ahead and share the annotated screen grab on social media, forever marking the moment with laughter. But this is Kirsten Dunst, so all bets are off.

Plemons was nominated during the evening for his work on Black Mirror; he lost out to Darren Criss in the Outstanding Lead Actor in a Limited Series or Movie category, for Criss’s role in The Assassination of Gianni Versace.

Dunst and Plemons welcomed a baby boy in May, and the Emmys marked Dunst’s first red carpet appearance since giving birth. 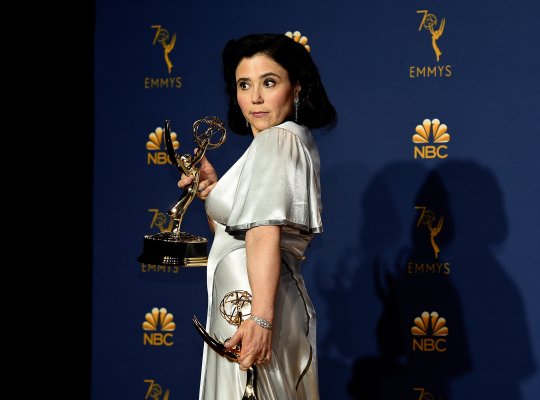 The Marvelous Mrs. Maisel Won the Internet and a Bunch of Emmys in the Process
Next Up: Editor's Pick