The Chair Is a Pretty Accurate Portrayal of What It's Like to Be a Woman Professor of Color. That's Why It Can Be Painful to Watch

I’ve been an English professor for nearly 20 years, but people still tell me I don’t look like one. Not because I’m young (I’m not), but because I’m Asian American. Whenever professors are depicted in shows or movies, they’re usually stereotypes—elitist, intimidating, eccentric, out of touch, occasionally inspiring—and they’re almost always white and male and, yes, wearing wool jackets. So for me it was startling, even emotional, to see Sandra Oh as a professor trying to run a dysfunctional English department at an East Coast liberal arts university on the Netflix show The Chair. As her character Dr. Ji-Yoon Kim says, “When I started, it was like, ‘Why’s some Asian lady teaching Emily Dickinson?’” Like so many of us, she is still struggling with the idea that she has something to prove. (Spoilers ahead.)

In the fictional Pembroke University English department, there are only two professors of color: Ji-Yoon and Dr. Yasmin McKay (Nana Mensah), a Black scholar who is about to go up for tenure. The careful way they move through the university is surely familiar to every woman of color in academia. In one scene, Yaz attempts to connect with an older white male professor (Bob Balaban), who happens to be instrumental in her tenure application, by talking about a shared interest, Herman Melville, and how the New York Times misspelled Moby-Dick in his obituary. She reaches out, only to discover in the next moment that he’s written a letter undermining her tenure. This is real: the work of negotiating white people’s comfort, as a way to make life a little bit easier overall, and getting nothing, or worse, in return.

Read more: I’m a Black Woman Who’s Met All the Standards for Promotion. I’m Not Waiting to Reward Myself

Like Ji-Yoon, I once took on a leadership role at a small university, in my case directing an academic program. Like Ji-Yoon, I was the first woman of color in that position; I was the first person hired on the tenure track in that program at all. I too inherited a tangle of enrollment worries, generational conflicts among faculty, ominous edicts from the dean’s office, and concerns over how and what students are taught (does Chaucer “matter” anymore?) and who gets to decide. I too endured microaggressions, like being mistaken for another Asian American woman, or being told that I needed to be “civil” when I objected to an event’s lack of diversity. And, like Ji-Yoon, I felt set up for failure, set up for many years of looking back and wondering what I could have done better.

At one point in The Chair, Yaz says to Ji-Yoon, “You act like you owe them something. Like you’re here because they let you be here, not because you deserve it. I mean, what are they without us at this point?” She adds, “You’re running around playing nice.” Ji-Yoon reacts defensively, but it’s clear that Yaz’s comments have hit home. Has Ji-Yoon been playing too nice? How complicit has she been? Does she have to carry the weight of a white institution’s baggage? These are all questions I’ve asked myself too, along with a bigger one the show asks: What are we even doing here?

The truth is, Ji-Yoon and countless other professors of color are tasked with cleaning up the messes that white people have put in place, and continue to make, and then we get blamed for not fixing everything. (All while trying to manage our own classes and research.) In The Chair, this scenario mainly plays out with the character of Bill Dobson (Jay Duplass), another English professor and Ji-Yoon’s would-be love interest. His careless antics—because white guys like this get to be careless—lead to campus-wide protests, raise questions about “cancel culture” and define the show’s main arc. As in real life, the woman of color spends much of her time trying to solve a host of problems that the white guys keep making worse.

I am the same age as Ji-Yoon and what I felt watching her was the pain of recognition, the tension of having come up in an old-guard era while trying to lead in a new-guard era. On one side is the character of Dr. Joan Hambling (Holland Taylor), a white feminist who’s on a list for possible forced retirement, who never went up for full professor because her research got sidetracked by departmental duties, who intends to support Ji-Yoon but, fueled by bitterness, undercuts her. On the other side is Dr. Yasmin McKay, whose innovative teaching and research win over students and who knows how much she herself deserves. When Ji-Yoon tells her, “You are the going to be the first tenured Black woman in this department,” Yaz’s response is perfect: “That’s why I’m leaving.” She has recognized what Ji-Yoon and certainly Joan before her never did.

Read more: Here’s Everything New on Netflix in August 2021—and What’s Leaving

The Chair hones in on the increasingly fraught landscape of the American corporate university, where meetings and management take up more space than the actual and joyful work we really want to do: teaching. With just six half-hour episodes so far, let’s hope this show gets another season. There’s plenty more absurdity to lampoon, and plenty more reality to tackle, like adjunct labor and ongoing challenges to critical race theory.

I’m now at a university that bears little resemblance to Pembroke, but being a woman professor of color at any predominately white institution isn’t easy. The Chair was stressful to watch for that reason. But it’s also the first time I’ve seen someone like me, an Asian American woman, professor, and mother, as the protagonist of a show. Along with the recognition and anxiety, I felt a sense of tenderness toward Ji-Yoon and then toward almost every other character because she does too. This is, after all, what we do in English classes everywhere, whether we’re talking about Chaucer or our students’ creative writing: we look for complication, we seek new perspectives, and we work toward a better sense of understanding. 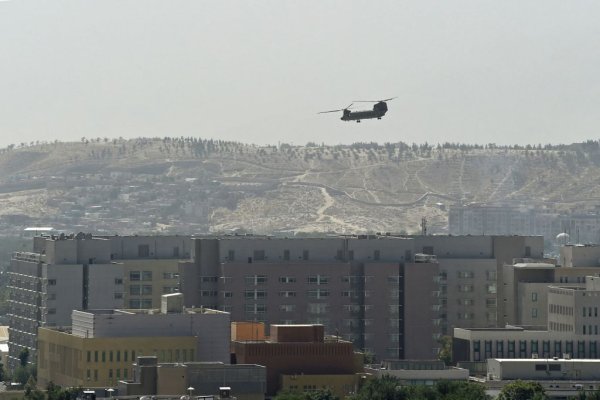 Biden Must Keep U.S. Operatives in Afghanistan To Enable the Counterterrorism Mission
Next Up: Editor's Pick