With the future of communal cinema feeling so perilous, many of us who love the movies might be feeling it’s time to go big or go home. Give me a spectacle or give me nothing; don’t just tease me, jolt me. It’s possible to be both exhausted and hungry for experience, almost any experience. Most of us don’t know what we want right now—so we feel our way along, hoping that we’ll know it when we see it, or bump into it.

Is Annette—the first film in nine years from French filmmaker and madman poet Leos Carax, and a collaboration with the enduring and ceaselessly inventive art-pop duo Sparks—the it we’ve been waiting for? Or is it the year’s be-careful-what-you-wish-for movie, the monkey’s paw that pretends to fulfill some unexpressed longing but really just leaves you with a handful of air?

As I stare at the air in my hand, I have to concede that Annette is not the movie I was hoping for, nor is it the movie I didn’t know I wanted. A picture that’s gorgeous to look at but too hyper-manicured to be genuinely moving, it hovers somewhere in an indefinable in-between. I keep believing that if I just think about it more, I’ll like it better, but it’s time to give up. Annette is an extravagant-looking and often inventive film, but it’s not a great one.

Read More: This Summer, We’re Going to Go to the Movies More—and Love It More

Marion Cotillard and Adam Driver star as mismatched lovers Ann and Henry, both in show-biz but each playing to the audience in different ways. Ann is an opera singer, fragile and captivating onstage, somewhere between waif and warrior. Each night she sends spectral melodies out into the universe, songs with the weblike clarity of spun glass. Then she dies on-stage, and the crowd goes wild—it’s her signature move. Henry is a perpetually angry comedian—his moniker is the Ape of God—and in performance, he almost literally comes out swinging, dressed in a hooded terry wrapper that’s a cross between a boxer’s robe and the kind of thing a bitter old man shuffles around the house in. He challenges his audience by refusing to capitulate to them, and they love it—his self-loathing pugilism is a turn-on.

Still, he does confess to that audience that he’s a changed man now that he’s fallen in love with his opera singer. And when, after his show, he zips through the streets of Los Angeles to pick her up after her show, you think for a minute there might be hope for these two—that she can soften his hard edges as you’d wear in a pair of leather shoes, and he can give her a little ballast, to prevent her, sensitive creature that she is, from blowing off the face of the Earth altogether.

These two are in love—we know it because they sing a pensive ballad to one another, “We Love Each Other So Much,” whose lyrics consist largely of that repeated line. (Driver’s voice is robust, like brown suede; Cotillard’s has the tone and texture of pastel watered silk. There’s plenty that doesn’t work in Annette, but the sound of these two singing together is one of the movie’s charms.) In their minimalist-chic house in the woods, Henry and Ann have lush, elegant sex, including some artfully administered cunnilingus. Carax and cinematographer Caroline Champetier stage these scenes beautifully, if decorously: the character’s bodies curl together like pale forest mushrooms brushed with moonlight, an image of fairytale enchantment that’s also delicately carnal.

And inevitably, these two conceive a child, though she isn’t actually a child—she’s a marionette, a beautifully sculpted puppet with enormous ears and unnervingly plaintive, expressive features. Her name is Annette, and she’s been born with an extraordinary gift.

Annette is an operatic tragedy written in big loops, as well as in some very repetitive songs. Ann and Henry may love each other just that much—like those little naked statuettes from the 1970s who profess their adoration with outstretched arms—but it’s not enough to save them. Henry’s love for Ann doesn’t make him stronger and kinder, but angrier and meaner. Driver’s height and brawn are used to menacing effect here. He’s never been so believably unlikable, which is certainly an achievement, if it’s the kind of thing you want to see. Ann becomes a victim of his fury; little Annette becomes a pawn. A fourth party, Ann’s loyal piano accompanist (played, with resonant tenderness, by Simon Helberg), holds a lonely secret.

There’s a lot of movie here: Ron Mael and Russell Mael, of Sparks (and the subjects of Edgar Wright’s recent and wholly delightful documentary The Sparks Brothers), have concocted a sprawling mansion of a story. There’s always a new door, opening almost inevitably into a shadowy room you might be hesitant to look into. The ending is set up to be poignant, and some may find it so—but I felt so worked over by the movie’s excessive self-awareness that, even at the end of this extravagant and sometimes impressive sprawl, I found myself echoing Peggy Lee: Is that all there is?

The Maels have been making music as Sparks for some 50 years; their work tends to be clever and lively and laced with bone-dry humor. But they’re also at times guilty of being arch, perhaps too taken with their own wicked wordplay. And Annette is, overall, too knowingly affected. In its deliberate stylization, it’s weird, all right—but this is assertive weirdness as opposed to organic weirdness. It also suffers from a maddening lack of clarity, even within its own world of opera-fairytale logic: In one musical number, a group of women come forward with MeToo-style allegations against Henry, but this bombshell is dropped and then forgotten. Meanwhile, Ann’s feelings largely remain opaque, and it’s not Cotillard’s fault: She spends a great deal of time staring moonily from the window of her limo, a half-eaten apple nearby. She’s having feelings, clearly, but they’re detached from her being, like a cartoon voice bubble.

It could be that the Mael brothers and Carax just aren’t the best fit; maybe their idiosyncrasies spark an unintentional dissonance. The movie’s opening number, “So May We Start?” is the strongest, and it’s thrilling: We see Carax and his daughter, Nastya, as well as Ron and Russell Mael and a few of the story’s supporting players spilling out of a recording studio and into the street, where they’re joined by Cotillard, Driver and Helberg. Just for now, we’re seeing these performers as versions of themselves, if not quite themselves, and their singing is hearty and definitive. They’re warming us up for the show ahead, promising great wonders to come as they set up for us that figurative fourth wall we all love so much.

The opening musical number, 'So May We Start,' is the movie's strongest
© 2021 Amazon Content Services LLC

But nothing in Annette, as ambitious and sometimes gorgeous as it is, comes close to the haunting beauty of Carax’s last movie, the 2012 Holy Motors. In that film, the astonishing acrobatic actor Denis Lavant played a mysterious peddler of dreams and sometimes nightmares, tooling around the most beautiful Paris imaginable in a white stretch limo. The Samaritaine department store—once grand, but recently shuttered at the time of the movie’s filming—had its own supporting role, looming over the proceedings like a mournful gray ghost. What is Holy Motors about, literally? Damned if I know—beyond that it’s about all the things we ask of movies, blessings that, if we’re lucky, we actually receive. Annette makes a similar promise of emotional richness, but no matter how much of themselves the filmmakers have poured into it, the payoff is skimpy. This is a movie singing passionately to itself, even as we sit patiently all the way through, wishing it were singing to us. 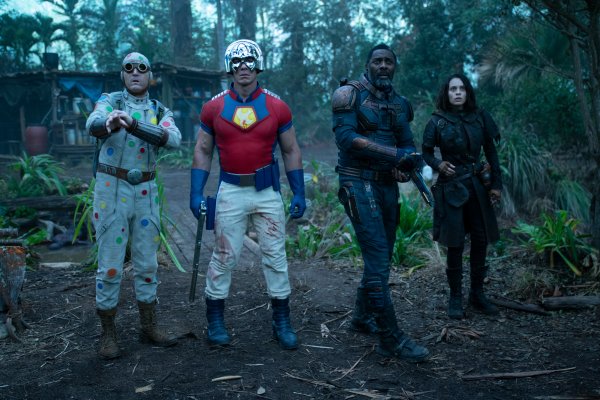 How The Suicide Squad End-Credits Scene Sets Up the Future of the DCEU
Next Up: Editor's Pick