This Summer, We’re Going to Go to the Movies More—and Love It More

Over the past year, most of us have spent at least some time speculating on the ways in which the pandemic will change us. We’re never going to take hugging for granted. We’re going to wear sequins for daytime. We’re going to look forward to boring in-person meetings, having learned that boring Zoom meetings are hardly an improvement. To this cheerful patchwork vision of our future selves, I’m adding one hopeful scrap: we’re going to go to the movies more.

This summer, in countries that have made good progress in getting people vaccinated, many of us will at last venture back into movie theaters, and there’s enough on the summer slate to entice people from their lairs: Scarlett Johansson gets her own corner of Marvel real estate with Black Widow. There are Purge and Conjuring sequels for those who’d rather be terrified in a dark theater than in their own living rooms. And Lin-Manuel Miranda’s In the Heights might be the proverbial open fire hydrant that parched audiences need right now. The coming months will be an opportunity to step back into the darkness into a different kind of light. But even beyond that, they might be definitive in terms of how we think about small screens vs. big ones. In fact, the post-pandemic return to the theaters could turn out to be one of the most significant events in the history of watching movies: those of us who love the scale of the larger-than-life image, and the economy and completeness of stories told in one shot, will have a stronger sense of who our tribe really is.

As an avowed big-screen person myself, I concede that this vision of a happy return to movie theaters is colored as much by emotion as by logic. And it doesn’t represent an easy cure for a battered industry, especially for exhibitors, some of which—notably Southern California’s ArcLight Cinemas and Pacific Theatres—couldn’t survive our lost year. But the movie business isn’t the only one facing a recalibration of expectations. For now, as we step back into the world, let’s focus on our own personal recalibration, and on what our return to big-screen movie watching might tell us.

As convenient and cheap, at least in relative terms, as our television screens are, there will always be stark differences between the big-screen experience and the small one. The critic Geoffrey O’Brien, in his 1993 book The Phantom Empire, describes the act of venturing forth from the TV room: “A bolder escape was possible. You could pull up stakes and go to the movies, as you might take a transcontinental train ride or climb a mountain. The movie screen … was considerably more than a window. You had to pass through a number of intermediary zones—ticket booth, popcorn stand, usher’s station—even to approach it. After passing through a region of silence and blindness the spectator slid into the seat and submitted to an unearthly visitation.”

Leaving the house has always represented a kind of adventure, a willingness—or eagerness—to engage with the greater world, even if, in a way, the escape to the movie theater is itself a kind of scurrying between two safe havens. But are the movies really safe? Is the act of opening ourselves to the world ever really safe? At home there’s no demarcation between your sofa and the world. Surrendering to the big screen will always be different from slouching in front of the small one, no matter how cushy your home-theater setup is. (One point worth mentioning: streaming movies at home is definitely a boon for cash-strapped parents, since taking even just one or two kids to the movies means dropping a pile of dough.)

That said, people who truly love movies face a reckoning right now. Plenty of social media soothsayers are claiming that no one will want to go back to theaters now that they’re used to streaming big new releases at home. It’s too inconvenient, too messy, and worst of all, you have to deal with the unpredictability of other humans. Who needs it? And yet there are those who, for whatever reason, do need the whole experience, including the unpredictability of other humans. A craving for the shared experience is our blessing and our curse. Remember those walks in the park, or on the street, in the pandemic’s early days? Even for avowed loners, to see other human faces—even masked half-faces, 6 ft. away—was part of the draw. It was one hedge against feeling utterly alone.

Which brings us to one of the greatest joys of moviegoing: the lure of the giant face. Give me a big face any day! Brad Pitt, Viola Davis, Chadwick Boseman, Steven Yeun—the human face is magic, a spectacle of beauty and expression that leaves even the most elaborate special effects in the dust. There’s some fine acting, and of course terrific writing, on television. But our relationship to faces seen small isn’t the same. Seen large, a great face is both map and mirror, a key to our own emotions—to those we may have buried or forgotten, but also, perhaps, to those we haven’t yet experienced. Despite the stereotype of the recluse who prefers movies to firsthand human encounters, I’ve often wondered if the faces of actors aren’t one of our best means for fostering empathy.

Movies seen big offer other wonders too: wide-open landscapes that make us feel very small, explosions that shake us to our core, shoot-outs or fight sequences that offer some primal, cathartic release. Though I believe wholeheartedly in the idea of movie love, I dislike the word cinephilia; it’s a word that drinks its tea with its pinkie up, one that clears a room rather than opening its doors to all. An action movie, a so-called dumb comedy, a horror film you might check out on a Friday night: there’s no wrong kind of movie to love, only a shared desire to lose ourselves in color and sound and movement.

My own recent return to the movie theater—to the Paris in New York, the city’s last remaining single-screen theater—was to see A Shaun the Sheep Movie: Farmageddon. And beyond the fact that I simply can’t resist an Aardman stop-motion sheep, the experience shook something loose in me. We’ve all been rattled and anxious for so long. Obviously, a return to moviegoing isn’t going to solve all of everyone’s problems. But for me—a person who has always preferred the big-screen experience, and who now realizes how much I prefer it—my Farmageddon excursion was revelatory. I have been so deeply unhappy not being able to go to the movies. But what if not even going back makes me happy? Then what? None of us really knows what this past year has done to our wiring, to our pre-pandemic notions of fun and pleasure. What if the outside world, even the world of movies, isn’t all it’s cracked up to be?

I needn’t have worried. My concentration as a viewer was sharper than it’s been in more than a year. I felt awake and alive in a way I haven’t in ages. Maybe going to the movies is just what we need to jump-start us back to life. We talk about surrendering to images, but maybe the act is more akin to completing a circuit, a way of sparking some interior electricity our brains and hearts didn’t know they needed. Those new people we’re supposed to become post-pandemic? The ones who are fun, glamorous, alive? Those are the people the movies have been training us to be all along. We’re not going to meet them unless we get up off the couch. 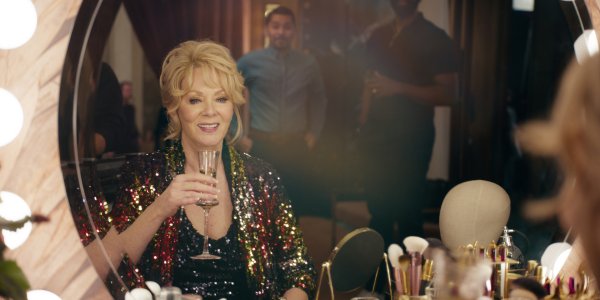