In Ahmir “Questlove” Thompson’s radiant documentary Summer of Soul, an account of a star-studded concert series that took place in a Harlem park during the summer of Woodstock but received far less attention, a fiftyish gentleman who attended the shows as a kid, Musa Jackson, describes the experience as if it were a dream. Only when he saw footage of the performances, stored away for some 50 years, did he realize how overwhelming this event—a showcase of great Black performers, staged for a nearly all-Black audience—had been: “You put memories away,” he says, “and sometimes you don’t even know if they’re real.”

If part of a musician’s skill is knowing just where to put which notes, the other, more elusive gift is knowing how to spin a dream between performer and listener. This summer, as musicians and audiences alike reacquaint themselves with the pleasures of live music, three documentaries help connect us not just with what it means to be an artist, but with the equally crucial act of being a listener, of becoming part of the crackling circuit between artist and audience. To be a fan is to be part of a community, and Questlove’s Summer of Soul, Edgar Wright’s The Sparks Brothers and the Hulu docuseries McCartney 3,2,1 remind us of the ways music unites us, whether we’re nestled shoulder to shoulder with likeminded people or plugging in more intimately via headphones or Airpods.

In the six-episode McCartney 3,2,1, premiering July 16, superstar record producer Rick Rubin sits down with once-and-forever Beatle Paul McCartney to walk through some of the signposts of his career, as well as some songs that simply present the opportunity for an amusing anecdote or two. The series, directed by Zachary Heinzerling, is so relaxed that you almost forget you’re watching a veritable rock’n’roll god in action. One minute he’s sitting at the piano, playing a trio of chords that can be mixed and matched into a nearly infinite garden of delights; the next he’s revealing the secrets of an isolated vocal track laid down practically a lifetime ago.

Read more: ‘This Film Was My Chance to Correct History.’ Questlove on Summer of Soul and the Oscars

But the intimacy of McCartney 3,2,1 makes it hard not to feel some tenderness for this megastar, now 79, whose band shook something loose in the world. To hear McCartney reflect on the early days is to be reminded that he and his bandmates started out as kids, honing their chops by playing live shows in humble venues. They didn’t even have a tape recorder to help them work out their ideas. “We were writing songs that were memorable not because we wanted them to be remembered,” McCartney tells Rubin, “but because we had to remember them. A very practical reason, really.”

Yet fandom, even at the level inspired by the Beatles, is never an end in itself. It’s also a beginning, an open door to rapture, to finding your place in the world—and, sometimes, to creating new work that builds on the old. Filmmaker Edgar Wright (Shaun of the Dead, Baby Driver) has long adored the art-pop act known as Sparks, and The Sparks Brothers, now in theaters, covers the duo’s 50-year-plus career in voluminous, affectionate detail.

Brothers Ron and Russell Mael are the performers behind Sparks: born and raised in Los Angeles, they started their first band there in 1967, though their career didn’t ignite until they decamped for London. Circa 1974, the time of the duo’s first big U.K. hit, “This Town Ain’t Big Enough for the Both of Us,” Russell was a string-bean glam-rocker with a curly mop of hair, a teenybopper idol spinning out semi-surrealist lyrics. Ron, glowering behind the keyboard, favored a narrow smudge of a mustache that’s either Hitlerian or Chaplinesque, depending on your mood.

Although this sounds like an unlikely formula for success, Sparks have endured. The Mael brothers continue to make and release strange, innovative albums, and they’ve written a movie, Annette, directed by Leos Carax, which was chosen as this year’s opening film at Cannes. And while their brand of avant-garde weirdness has attracted loyal fans over the years, their influence may be best measured by the number of musicians and bands they’ve inspired. The movie’s trailer touts Sparks as “Your favorite band’s favorite band,” and sure enough, one artist after another shows up in The Sparks Brothers—Beck, Thurston Moore, Flea—to pay homage. Over the years, clueless critics have at times accused Sparks of stealing musical styles they’d in fact originated. They were so ahead of their time that they were practically ahead of themselves.

A still from 'The Sparks Brothers'
Sundance Institute

Artists reach us by surprising us, even if that just means telling us old stories in new ways. But Summer of Soul, now in theaters and streaming on Hulu, shows us another side of that equation: The way an audience’s mere presence—its energy and love, manifested in a sea of faces and bodies—can reach an artist, perhaps moving him or her to tears.

Summer of Soul, which broke the sales record for documentary acquisitions out of Sundance after winning major awards there in January, is Questlove’s account of a series of concerts known as the Harlem Cultural Festival, held during a six-week span in the summer of 1969. The location was Harlem’s Mt. Morris Park—now known as Marcus Garvey Park—and the turnout for these free shows was spectacular. Television producer Hal Tulchin filmed the performances, resulting in 40 hours’ worth of material. But Tulchin couldn’t interest anyone in releasing the footage commercially, and it languished in storage until Questlove rescued it. He has artfully assembled that footage here, combining it with present-day accounts from people who were there, either performing on-stage or watching from the audience.

It’s hard to believe—or maybe it isn’t—that a festival with so many showstoppers has eluded mass attention until now. A very young Gladys Knight, already possessed of a very big voice, storms the stage with her Pips. Stevie Wonder, at the time only 19 and dressed in a killer apricot and chocolate suit-and-shirt combo, starts a number on the keyboards before wending his way over to the drums—because he can play those too, and he’s not about to let anyone forget it. Sly and the Family Stone breeze onto the stage like a gust of psychedelic butterflies. Mahalia Jackson, dressed in a hot-pink caftan like a heaven-sent cloud, soars high with Martin Luther King Jr.’s beloved “Precious Lord Take My Hand,” a young Mavis Staples, awe-struck, singing at her side.

The 5th Dimension performing at the Harlem Cultural Festival in 1969, featured in the documentary 'Summer of Soul.'
Searchlight Pictures

All of these acts are extraordinary. But the real miracle of Summer of Soul is the audience, vast and varied and nearly all Black: Whole families had come to the park, picnics in tow. We see giddy toddlers wriggling and jiggling, taking to heart Sly Stone’s entreaties to dance to the music. Some young women wear neat shift dresses and straightened tresses; others splash out in African prints, their hair natural, a style that had only recently become popular, in parallel with the Civil Rights Movement. This audience, standing together and filled with joy, was marking the creation of a new world, one that’s still coming into being half a century later.

One of the festival’s younger, groovier acts was the Fifth Dimension, who’d recently scored a number-one record with their floaty medley of “Aquarius” and “Let the Sunshine In” from Hair. A few years earlier, they’d released an album keyed to another huge hit, Jimmy Webb’s “Up, Up and Away.” The album’s cover featured the group huddled together—wonderfully, ridiculously—in the basket of a hot-air balloon.

In one of the most moving sequences of Summer of Soul, the Fifth Dimension’s Marilyn McCoo, interviewed in the present day, explains why she and the other members of the group—including her husband, the thoroughly charming Billy Davis, who also appears in the film—were so happy to be invited to perform at the festival. Among Black audiences, McCoo says, there was a sense that the Fifth Dimension “weren’t Black enough.” It meant a great deal to her and her fellow musicians to play before, and feel embraced by, her own people.

As McCoo and Davis watch younger versions of themselves on a screen that we can’t see, McCoo says—betraying the shyest trace of a tear—“We were so happy to be there.” And so the dream circuit between audience and artist is complete, so cosmically whole it’s impossible to tell where one begins and the other leaves off. 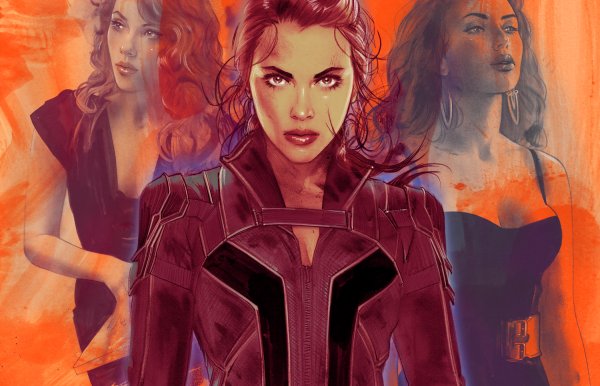 Black Widow Began as a Sexist Stereotype. More Than a Decade Later, Scarlett Johansson Is Reclaiming Her Story
Next Up: Editor's Pick