The Sparks Brothers, a Sundance Delight, Tells the Grand Story of This Enduringly Enigmatic Art-Pop Duo

In 1983, when I heard a crazy little song called “Cool Places,” a collaboration between Jane Wiedlin, of the Go-Go’s, and an outfit I’d sort-of heard of called Sparks, I asked myself rhetorically, ‘Sparks, where have you been all my life?’ Then I sort of forgot about them, until roughly 2015, when a diabolically ingenious album called FFS—a collaboration between the Scottish band Franz Ferdinand and, once again, Sparks—caught my attention. Then I sort of forgot about them again, until I watched Edgar Wright’s glorious documentary The Sparks Brothers, which premiered at this year’s Sundance Film Festival. From now on, I swear I’m going to be all Sparks, all the time.

Sparks—a code name for real-life brothers Ron and Russell Mael—are often described as an art-pop duo, which is as good a description as any, given that they’ve influenced bands across roughly five decades without becoming conventional superstars themselves. And they will probably continue to inspire and confound until the end of time—Sparks are that inexplicable, and that durable.

Wright—the director behind Shaun of the Dead and Baby Driver—has loved Sparks for a long time, and he’s the ideal guide through their woolly story. The Sparks Brothers begins not at the beginning, but in the eternal middle of the Sparks story, which is today. We see Ron and Russell as they are now: hip but distinguished-looking guys in their seventies, Russell with a shock of straight, dark, possibly not-real hair, Ron rocking a pencil mustache borrowed from Errol Flynn. Then, Wright shows Ron and Russell as the adorable, classic 1950s-style kids they were, born three years apart and, as it turns out, inseparable in a prickly sort of way. Ron and Russell, raised in Los Angeles, tell us that their parents loved bringing them to the movies, and had no compunction about walking in right in the middle. The brothers suggest that imagining the beginnings of so many movies may have influenced the songs they write, which are often exercises in defiant, cerebral nonlinearity that somehow make perfect sense. (Here’s a sample lyric, from an early song called “Girl from Germany,” about a guy bringing his girlfriend home to meet his Jewish parents: “Well, it’s the same old country/but the people have changed/My word, Germany/with its splendid castles and fine cuisine.”)

In the early days, the Mael brothers weren’t sure whether they’d become filmmakers or musicians, or maybe both. In 1967 they formed a band called Halfnelson, which found only mild success in Los Angeles. To make it big, Ron and Russell had to change their band’s name—an early manager, knowing how much they loved the Marx Brothers, suggested The Sparks Brothers, a name they loathed and successfully shortened. They also had to move to England to get things going, and Wright provides some primo footage from the time, roughly 1974, of their first big U.K. hit, a peacocking male aria, about—maybe?—two dudes squaring off over the same desirable lady, called “This Town Ain’t Big Enough for the Both of Us.” Russell is a peripatetic string-bean glam-rocker with a fuzzy halo of hair and a snaggle-tooth smile; Ron is perched stiffly at the keyboards, sporting a Hitler mustache and an intimidating expression. What, exactly, is going on here? Russell’s high-pitched vocals have a dipsy-doodle operatic quality, and he’s cute enough for the pages of Tiger Beat. Ron is just weird, but the wild, baroque curlicues spinning out of his keyboard are both seductive and sophisticated. Sparks was one of those bands unlike any you’d heard before, until everyone started borrowing from them.

Since that time, Sparks has changed styles so many times—always ahead of the current fashion, not in response to it— that they’re often accused of being imitators of bands they’ve actually inspired. And they continue to make records, and book tour dates. (They’ve also written a recently completed film, Annette, directed by French filmmaker and genius-wildman Leos Carax and starring Adam Driver.) Wright includes interviews with musicians who have long adored Sparks (among them Beck, the Sex Pistols’ Steve Jones, and Nick Rhodes and John Taylor, of Duran Duran), as well as random smarties like Patton Oswalt and Neil Gaiman. There’s a lot of material here—The Sparks Brothers runs a whopping two hours and 15 minutes, though it feels as fleet as a three-minute pop song. OK, maybe a four-minute pop song—but this grand, big-little film leaves you wanting more of Sparks, not less. If you’ve only sort-of heard of Sparks, The Sparks Brothers is a great place to begin. If you’re already a fan, you’ll go nuts for it. And if you’re like me, you’ll never lose track of Sparks again. 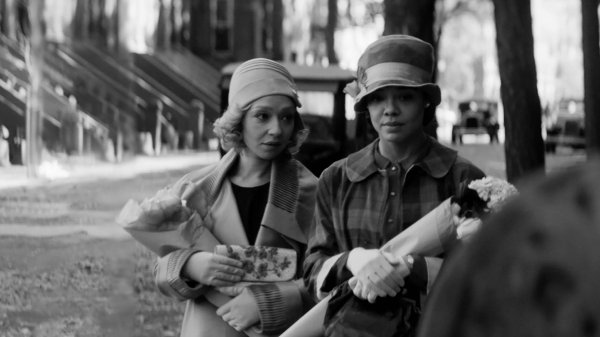 'Passing' Is a Complex, Moving Story about Racial Identity
Next Up: Editor's Pick