Baby Driver Is Fast, Furious and Full of Heart

A great pop song is a gimmick by design, not so different from a shiny fisherman’s lure. They don’t call it a hook for nothing. We think we’re in control when really, it’s the other way around. That’s how Edgar Wright’s jukebox thrill ride Baby Driver works too. In the opening sequence, an unnervingly serene young getaway driver evades a clutch of cop cars while lost in his own personal earbud reverie. He’s got the Jon Spencer Blues Explosion’s 1994 fuzzed-out rave-up “Bellbottoms” dialed up on his iPod, and the music inside his head is also in ours. The kid’s got style, but we can see that he’s a little off—it’s probably not a good idea to linger in his brain. Still, how much could it hurt to stick around for a bit and see what else is on his playlist? And what he does next? And whom he answers to, and why? Also, maybe there’s a girl.

Fish hooked, if not yet cleaned and cooked.

In those early moments, we may think we know exactly where Baby Driver is going and how it’s going to get there, and in some ways we do. The kid with the earbuds, the driver, is actually named Baby, and he’s as adorably cherubic as a Tiger Beat pinup. (He’s played by Ansel Elgort, who previously incited the throbbing of young hearts in 2014’s The Fault in Our Stars and the Divergent series.) But there’s sorrow in Baby’s soul, which Wright spells out in misty flashbacks. His mother, a singer, gave him his first iPod when he was just a sprout. (She’s played by dreamy songstress Sky Ferreira.) Then she died in a car accident. Now Baby lives a life illustrated with songs, which isn’t the same as being guided by voices. His multiple listening devices are loaded with everything from Dave Brubeck to Sam & Dave, and though he listens out of love, his nonstop soundtrack also helps relieve the tinnitus that haunts him.

At first Baby seems more an invention than a character, a collection of traits and quirks that might not add up to a whole person. But scene by scene, Wright (who also wrote the script) and Elgort give him shape and soul. Baby drives because he has to—he’s paying off a debt to smooth criminal mastermind Doc (Kevin Spacey). But he’s hardly a pushover and stands up to the bullying of the thieves and bandits he counts among his passengers, including a psychotic hothead played by Jamie Foxx. He lives with his elderly, wheelchair-bound foster father Joseph (the wonderful CJ Jones), who is deaf, which might seem too obvious an irony in a story about a kid who’s ruled by music. But when Baby meets a girl he likes—diner waitress Debora, played by the radiant Lily James—he comes home, animated with joyous energy, and sets Carla Thomas’ “B-A-B-Y” spinning on the stereo. Joseph puts his hand on the speaker, feels the vibe and smiles. Then he signs, “I approve of the girl.”

Baby Driver is also, of course, an action thriller. Wright has orchestrated every swerve and near smashup—and one glorious foot chase—with precision, a rarity in action filmmaking these days. The picture riffs on the seedy pleasures of ’70s drive-in classics like Walter Hill’s The Driver—which Wright has cited as an influence—and Richard C. Sarafian’s Vanishing Point. The plot is shaggier than it needs to be, but it’s still more streamlined than any other picture Wright has made, including Shaun of the Dead, The World’s End and Scott Pilgrim vs. the World.

Those movies, while at times enjoyable, all have a kind of smirky Neverland quality, a “Lads, let’s never grow up!” vibe that no filmmaker, not even one as clever as Wright, can sustain. But Baby Driver, with its vivid, openhearted energy, is a bold step forward. Movies are supposed to keep us young—that’s one of their jobs. But you can’t keep gunning the arrested-development engine forever. With Baby Driver, Wright finally breaks free, and the result has a beat you can dance to. 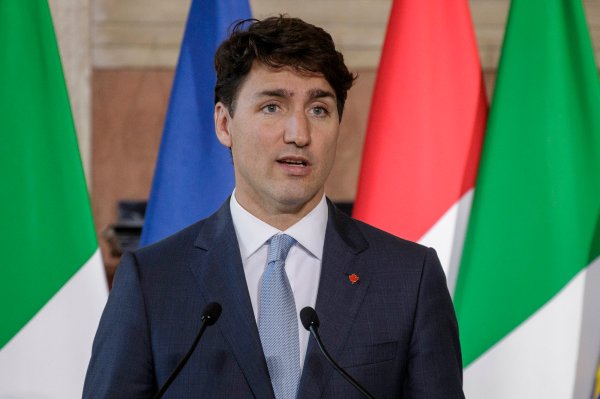 Here's a Photo of Justin Trudeau Having a Blast With the Cast of X-Men: Dark Phoenix
Next Up: Editor's Pick