The MCU Has a Longstanding Villain Problem. Loki’s Introduction of Jonathan Majors' Kang the Conqueror Might Just Solve It

This post contains spoilers for the finale of Loki.

It is universally acknowledged among even the most ardent Marvel Cinematic Universe fans that the Marvel movies have a villain problem. With some notable exceptions (more on these later) the bad guys tend to be somewhat simplistic, very disposable and have either vague or overly complicated plans.

And while Marvel often recruits fantastic actors to tackle these roles—from Cate Blanchett to Robert Redford to Jake Gyllenhaal—they rarely get time to do much more than chew the scenery, and then we never hear from them again.

That’s what makes Jonathan Majors’ performance in the final episode of Loki so exciting. Majors is introduced as the Man who Remains, a moniker the character himself calls “creepy.” For the sake of simplicity we’ll call him Kang the Conqueror, since Marvel has confirmed that Majors will play Kang down the line, and the man we met in Loki is a variant of Kang.

Marvel has confirmed that Majors’ Kang will appear in the Ant-Man and the Wasp sequel, and some fans are already theorizing that Majors may show up in multiple movies, linking the MCU together the way Iron Man did for the first three phases of the cinematic universe. That’s an exciting prospect.

To understand why, exactly, people are so excited about Kang, first you need to understand Marvel’s struggles with villains in the past. Here’s everything you need to know about Marvel’s villain problems and how Kang may just resolve some of those issues.

Read more: Here’s What the Loki Finale Means for the Future of Marvel Movies

In the early years, the villains were usually just evil versions of the good guys. Iron Man, meet another rich dude in a suit, Iron Monger. Hulk faces off against another green monstrosity, Abomination. Ant-Man battles against another shrinking foe, Yellowjacket.

Those are the most egregious examples, but let’s be honest—even some of the good villains are, on the surface, fun mirror versions of the heroes. Ultron literally contains parts of Tony Stark’s personality in him. Captain America and Bucky are both super soldiers and former best friends. Thor and Hela are both Asgardian rulers. Taskmaster literally mirrors Black Widow’s every move. After a decade of movies, watching a hero fight their double can get a tad boring.

The “vague villain with a vague plan” problem

Ah, the most forgettable villains: The ones with incomprehensible plans and little personality—your Malekiths in Thor: The Dark World, your Dormammus in Doctor Strange, your Ronans in Guardians of the Galaxy. These villains feel particularly disposable. They won’t show up in future movies, and frankly fans don’t want them to.

The “good guys who went too far” problem

Erin Kellyman in Falcon and the Winter Soldier
Marvel Studios

After hearing years of complaints about boring bad guys, Marvel started trying to give the villains sympathetic backstories. When those backstories clearly explain the villain’s ideology, as with Killmonger in Black Panther (more on him later), that method can work. But when those origin stories lack depth and meaning, they fall flat.

Take, for example, Karli in The Falcon and the Winter Soldier. Shifting borders resulted in something bad happening to her family—we never learn what, exactly. Her stated motives are good—saving refugees around the world—so it’s jarring when Karli blows up a bunch of soldiers. We never see the moment she decides violence is the answer or hear her rationale.

Then there’s Ghost from Ant-Man and the Wasp, who is suffering from terrible pain as a result of an accident in her childhood. We don’t learn anything about her life between the accident and the film. She doesn’t have much of a personality at all. It’s difficult to discern the evolution from good to evil with so little concrete information about these characters’ lives.

Marvel has churned out a few fantastic villains. Black Panther’s Killmonger, like MCU baddies who came before him, is the mirror image of his cousin T’Challa in terms of power and purpose. Killmonger thinks the rich, technologically advanced African nation should share its resources with oppressed people across the world. We understand why he came to that worldview and how, after witnessing suffering across the world and grieving his own father’s death, he comes to believe he needs to enact violence to achieve it. In fact, T’Challa adopts a more peaceful version of Killmonger’s dream by the end of that film.

Similarly, Loki became an instant fan favorite villain not only because of Tom Hiddleston’s over-the-top Shakespearean delivery of the trickster god’s lines but because he had a heart. Living under Thor’s shadow, constantly striving and failing to meet his demanding father’s expectations, Loki’s insecurities and resulting egomania felt torn straight from the pages of the greatest myths about sibling rivalries.

Even Thanos had a stated motivation for his genocidal actions—environmentalism—that made him easier to understand. (Though it was never clear why, when he finally got his hands on the Infinity Gauntlet, he didn’t use it to double the resources in the universe rather than kill half the living beings.)

The problem is that the characters we like best tend to transition from villain to hero: Case in point, the MCU has accomplished some major plot gymnastics to turn Loki—a man who killed thousands of innocent people in New York City—into the sympathetic hero of his own show. Killmonger got a tiny redemption arc at the end as he died in T’Challa’s arms. Even Thanos has his ironic (and some not-so-ironic) defenders.

Marvel Studios has been missing some of the best Marvel villains

To be fair to Marvel, they have had to dig rather far down the barrel for enough villains to populate their many movies.

Ask a Marvel comics fan who their favorite villain is, and they will likely cite Magneto from X-Men or Doctor Doom from The Fantastic Four. Unfortunately for Marvel Studios, it didn’t own the rights to either of those characters for the first decade of the MCU. These men have simple but effective ideologies. For Magneto, it’s that mutants are superior to humans and should eliminate them before the inverse happens. For Doctor Doom, it’s that he would make a better, smarter ruler than anyone else in the universe. They also have fascinating backstories that inform those beliefs.

The good news is that the Disney-Fox deal ensured Marvel Studios would have access to both the X-Men and Fantastic Four, and Sylvie opening up the multiverse in the Loki finale certainly offers the Marvel creators ample opportunity to figure out how to bring those heretofore missing heroes into the cinematic universe. So, too, will come the villains. A Fantastic Four movie has already been announced.

Intriguingly, in one comics storyline, Kang discovers he’s the descendent of Doctor Doom and Doom’s nemesis, Reed Richards. So it’s certainly possible that Kang could play some role in that film.

Loki held back its villain until the final episode, a bold choice that only worked because Majors’ Kang proved the best thing in the finale, and perhaps the best aspect of the entire show so far. Majors is clearly delighted to be playing an evildoer. He smirks when he calls out Sylvie and Loki for their hypocrisy: “We’re all villains here.” Hiddleston used to delight in Loki’s villainy the same way before he turned good. Watching Majors actually makes me miss the old version of Loki.

Somehow, Majors is able to pull off speaking, almost uninterrupted, for an entire episode. In the hands of a lesser actor, the extended scene would surely bore audiences to tears. But Majors, who earlier this week landed an Emmy nomination for Lovecraft Country and appeared in The Last Black Man in San Francisco and Da 5 Bloods, makes unexpected and intriguing choices in his line delivery. Like many good villains, he’s incredibly charming. He’s also terrifyingly calm. He never yells or threatens or fights, as Thanos did. Nor does he need bodyguards or minions, as Thanos had. In fact, he greets death with a wink and a smirk. “Reincarnation, baby,” he says with glee. He’s already far more terrifying than Thanos ever was. I mean, the man uses Infinity Stones as paper weights.

He explains how the multiverse works and, in one monologue, sets up what will likely be the next decade of movies in the MCU. We’re about to see the Multiversal War that Kang predicts. And the many variants of Kang will be key players in that saga.

The Kang that Loki and Sylvie meet is just one of an infinite number of Kangs that exist in various parallel universes. This Kang explains how he defeated evil variants of himself from other timelines in order to ensure the safest trajectory of the universe possible. Sure, he had to eliminate the other timelines and harness everyone’s free will. But evil versions of him would have done far worse.

He offers Loki and Sylvie a choice: Control the timeline yourselves or kill me and unleash an infinite number of terrifying variants. Like all good villains—and all dictators—this variant of Kang thinks he’s the good guy, the only thing standing between the universe and a great war across the timelines. A pretty good motive! And what’s even more compelling: He’s right. When Sylvie kills Kang, the world does begin to fall to pieces.

We’ll definitely see a version of Kang again in Ant-Man and the Wasp: Quantumania, though it’s difficult to imagine Scott Lang outwitting any version of Kang (sorry, Scott). But we could also see dozens of versions of Kang in dozens of different movies—the possibilities are infinite—and because all the Kangs apparently look like Jonathan Majors, that means the same actor will get to experiment with playing many different versions of himself. Marvel has bet big that Majors can manage that challenge, and from the get-go, it looks like their gambit is paying off. 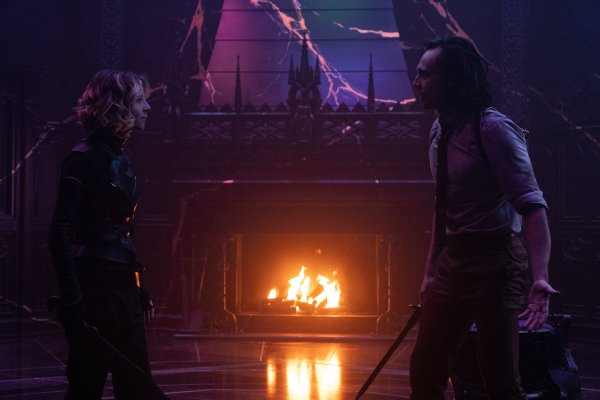 Here's What the Loki Finale Means for Future Marvel Movies
Next Up: Editor's Pick