It’s finally canon: the third episode of Loki confirmed that its titular character is bisexual, making him Marvel’s first canonically queer lead character. It took long enough. Loki made his debut in the MCU way back in 2011 and has been a mainstay in the universe for a decade, and yet fans are only finding out now that he is bisexual.

Loki is not the first queer character in the MCU and he won’t be the last. Marvel has plans to introduce a gay superhero in a film this year. But even as fans celebrate these major steps in reflecting the audience that watches Marvel’s films, it’s unclear whether Marvel’s portrayal of queer characters will live up to fan expectations. After all, Marvel Studios and many other franchises have been slow to tell queer stories. Here’s how that Loki episode fits into the history of queer superheroes in the MCU and other major franchises.

The revelation comes during a conversation between Loki (Hiddleston) and an alternate-timeline female version of Loki who goes by Sylvie (Sophia Di Martino). The two are interrogating one another about each other’s lives, wondering what could have been had they only been born in an alternate universe.

When they turn to the subject of their love lives, Sylvie asks Loki, “What about you? You’re a prince. Must have been would-be princesses. Or perhaps another prince?” To which Loki replies, “A bit of both. I suspect the same as you.”

The show’s director, Kate Herron, tweeted about the importance of the moment shortly after the episode debuted on Disney+.

Loki confirmed the character’s bisexuality just a couple weeks after the show seemed to also confirm that Loki is gender-fluid. In the first episode, there is a brief shot of Loki’s intake form at the TVA. Under “sex” on the file, it says “fluid.” It’s unclear if that means that Loki identifies as gender-fluid. Loki can change forms, including taking the form of a woman. We also now know that some Loki variants in other timelines are female, including Sylvie. Still, the mere inclusion of “fluid” on the form excited fans.

Read more: Everything You Need to Know About Loki and Time Travel in the MCU

Loki is not the first bisexual character in the MCU

There’s another openly bisexual character in the Marvel Cinematic Universe. In fact, she also resided in Asgard. Tessa Thompson confirmed to TIME in a 2019 cover story that her character from 2017’s Thor: Raganarok, Valkyrie, is bisexual. Thompson, who has openly spoken about being in relationships with both men and women herself, pitched Ragnarok’s director, Taika Waititi, on the idea based on a comic book storyline in which Valkyrie shares a kiss with anthropologist Annabelle Riggs.

“You don’t want to bite the hand that feeds you,” she told me at the time of her push for queer representation in Marvel movies. “But I think a friendly bite is okay. Inclusion doesn’t happen by mistake. You have to push people. Sometimes shame is a powerful tool. That wasn’t necessarily my intention, but I don’t mind it being a dare.”

Still, Valkyrie’s sexuality was hinted at but never explicitly stated. In a flashback scene Valkyrie loses one of her fellow female warriors during a fight with the villain Hela, and the dialogue implies that the fallen soldier may have been a love interest. Waititi intended for the revelation to be more explicit. He initially included a scene showing a woman walking out of Valkyrie’s bedroom. Ultimately, however, the scene was cut from the film. According to a Rolling Stone profile of Thompson, the filmmakers determined the moment distracted from the scene’s exposition.

Thompson has since promised that Valkyrie will get a love story in the next Thor movie Thor: Love and Thunder. In the last Avengers movie, Valkryie took Thor’s place as ruler of Asgard. During a panel at 2019 Comic-Con, Thompson said, “As the new king, she needs to find her queen. So that will be the first order of business.”

Marvel has teased that its November 2021 film The Eternals will feature its first openly gay main character to grace the big screen. The star-studded film centers on a group of celestial beings who have been watching over humans throughout history but have theoretically never interfered.

Brian Tryee Henry will play the character Phastos, an inventor who has children with his partner, an architect played by actor Haaz Sleiman. “He’s married, he’s got a family, and that is just part of who he is,” Marvel Studios Head Kevin Feige said of the character at Comic-Con in 2019. The two characters will reportedly kiss onscreen, which, if true, would mean that Eternals will include the first kiss shared by a same-sex couple in the MCU.

Fans have expressed frustration over the lack of queer representation

Marvel has plenty of progress still to make in terms of queer representation. Astute readers will have noticed that Valkyrie didn’t appear in a Marvel movie until 2017, and even then that character’s queerness was implied not stated. Eternals won’t be out until later this year. Considering that the MCU launched with Iron Man in 2008, that’s quite a long time to exclude queer characters from the narrative. Only now are LGBTQ+ fans seeing themselves reflected in the MCU.

Avengers: Endgame did include a cameo from director Joe Russo in which he plays a gay character who gets a few lines in which he talks about going on dates with men during a group therapy session led by Captain America.

“Representation is really important,” Russo told Deadline at the time. “It was important to us as we did four of these films, we wanted a gay character somewhere in them. We felt it was important that one of us play him, to ensure the integrity and show it is so important to the filmmakers that one of us is representing that. It is a perfect time, because one of the things that is compelling about the Marvel Universe moving forward is its focus on diversity.”

Still, that character didn’t even have a name. (He was credited as “Grieving Man.”) And Marvel found itself in hot water when Anthony Mackie responded to a popular fan theory that his character Sam Wilson (the new Captain America) and his friend Bucky Barnes (played by Sebastian Stan) are gay.

“It used to be guys could be friends, we could hang out, we could do this, and it was cool,” Mackie said on the Variety Awards Circuit podcast when he was asked about fans’ interpretation of the relationship. “You would always meet your friends at the bar, but you can’t do that anymore, because something as pure and beautiful as homosexuality has been exploited by people who are trying to rationalize themselves.”

This isn’t the first time that fans have speculated that two characters in the MCU might have a secret relationship. Shipping Steve Rogers and Bucky Barnes was a popular pastime before Steve retired as Captain America. Of course, the lack of queer stories is a direct cause of such speculation—without explicit representation on the screen, fans are left to wish and imagine that it were so.

Other franchises are lagging in queer representation too

The problem is not limited to Marvel. Often, studios (including Disney, which owns Marvel Studios) try to have their cake and eat it too by briefly alluding to a same-sex partner or flashing to a short scene of a queer couple and then patting themselves on the back for including those characters at all. Many of those franchises have been accused of queer-baiting, suggesting to fans that characters are queer without actually delivering on that promise.

The Star Trek film series spent a split second showing John Cho’s Sulu hugging his husband. Frozen briefly cut to a blink-and-you’ll-miss-it moment of a gay shopkeeper’s husband and kids. Donald Glover revealed that his character Lando Calrissian was pansexual in an interview but his queerness onscreen was limited to a vibe. In the live-action Beauty and the Beast, Josh Gad’s LeFou dances with his crush Gaston in what the director called an “exclusively gay moment”—albeit in the story arc of a silly sidekick. These fleeting moments have largely been met with frustration. Why, fans have asked, not give Sulu’s husband some lines or even a name? Why not give Frozen’s actual protagonist Elsa a girlfriend (#GiveElsaAGirlfriend trended when Frozen 2 was announced)? Why not show Lando dating humans, androids and aliens of various genders?

Perhaps the biggest perpetrator of this teasing tactic is the Fantastic Beasts series. Harry Potter author J.K. Rowling never wrote that fan-favorite character Dumbledore was gay in her books but stated that was the case after they were published. The news was met with mixed feelings: Celebration at the inclusion of the queer community in the books, and disappointment that Dumbledore’s sexuality was never explicitly stated or explored. Over the years, many fans have felt increasingly betrayed by its lack of inclusion in subsequent canonical Harry Potter stories. For instance, in 2018’s Fantastic Beasts: The Crimes of Grindelwald, a movie in which Dumbledore is a central character, Dumbledore’s love affair with the character of Grindelwald is somehow both central to the plot and yet never explicitly stated.

And then there are the franchises that simply don’t include LGBTQIA superheroes at all. So far the X-Men films have not yet introduced an openly queer character on the big screen. Other major franchises like Fast and Furious and Jurassic Park, despite having sprawling casts, remain steadfastly hetero. To its credit, Warner Bros. introduced its first openly gay character in the DC superhero films in Birds of Prey last year, but she was a supporting player, not a star of the series. Still, the biggest franchises tend to be the slowest to boast true representation.

Marvel has plenty of opportunities to introduce more queer characters

Several characters that Marvel has already introduced to the MCU are queer in the comics, including Dora Milage warrior Ayo (who features in Black Panther and Falcon and the Winter Soldier), Scarlet Witch’s children Tommy and Billy (who were introduced as youngsters in WandaVision but become superheroes as young adults in the comics) and America Chavez, who will make her big screen debut in Doctor Strange in the Multiverse of Madness. Marvel Studios now also owns the rights to X-Men, and many mutants are openly queer, including Ice Man. They also own Deadpool, who is pansexual in the comics.

Now that Loki’s sexuality is canon, hopefully many other superheroes—and wizards and princesses and intergalactic smugglers—will follow.

The original version of this story misstated the movie franchises that have not introduced LGBTQIA characters. The DC superhero franchise included an openly gay character in Birds of Prey in 2020. 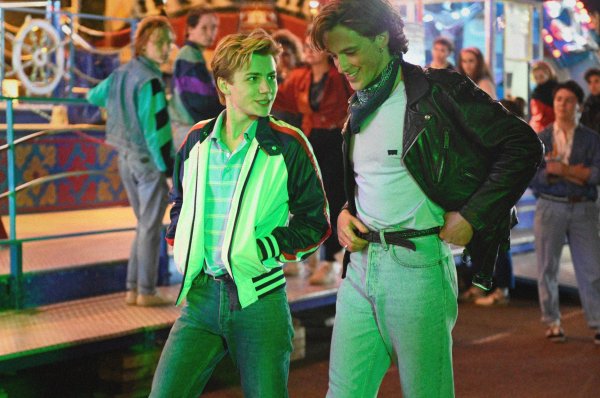 A Teenager in Normandy Feels the Heat of First Love in Summer of 85
Next Up: Editor's Pick