Review: Benedict Cumberbatch Is the Alchemist with the Mostest in Doctor Strange

There are many ridiculous but not inconsiderable pleasures to be found in Scott Derrickson’s Doctor Strange: The sight of Mads Mikkelsen, villain supreme, skulking around in metallic eye makeup and a silly ponytail; the joy of listening to Chiwetel Ejiofor deliver unapologetically ridiculous dialogue with the same sonorous gravity he’d bring to a production of Hamlet; and last, but hardly least, the vision of Benedict Cumberbatch, as surgeon-turned-sorceror Doctor Strange, attempting to wrestle his rippling red cape into obedience, and failing. All of these things are funny, but not in a “Look how hilarious all of this is!” way, a la James Gunn’s 2014 class clown of a movie Guardians of the Galaxy. Doctor Strange has one significant quality that most Marvel adaptations lack: A sense of humor about itself, which it wears as lightly as the most gossamer Cloak of Levitation.

Cumberbatch’s Doctor Strange is the movie incarnation of a minor Marvel character who first appeared in Strange Tales in 1963: He’s no Spider Man, or Iron Man, or Hulk. While Doctor Strange has his own solid fan base, he’s not forced to carry the beloved childhood memories of several million grown men on his shoulders.

That’s the last thing Doctor Strange—cynical, acerbic, supremely confident of his role in the universe—would want, anyway. When we first meet Dr. Steven Strange, he’s not so strange at all: Just a brilliant, glamorous surgeon, with a sweet, smart sometime girlfriend, Rachel McAdams’ Christine, and a drawerful of swanky collectible watches. One night, decked out in evening duds and en route to a charity event, he suffers a terrible car accident. (Texting while driving is his downfall.) His hands are shattered, and no amount of physical therapy will return them to their former unshakable glory. Then he learns of a secret place, somewhere near Kathmandu, where his powers might be restored. There he meets the enigmatic Mordo (Ejiofor), who leads him to a Celtic mystery chick with no eyelashes, The Ancient One (Tilda Swinton). She agrees to help Strange unlock a motherlode of mystical secrets that will, he believes, allow him to return to his old life. Not so fast, Doctor: There’s a price to be paid for all this shamanistic knowledge, and before long, our newly minted necromancer is mixing it up with the nefarious Kaecilius (Mikkelsen) and dodging the wrath of cranky sorcerer-librarian Wong (Benedict Wong).

Until the big climax—every Marvel movie has to have one—Doctor Strange is relatively quiet and visually beautiful, and some of its effects are wondrous: The Ancient One teaches the Strange one to summon currents of orange energy to his fingertips—they swirl around in glowing concentric circles before striking out in fiery flashes, like dragon’s tongues. The movie takes the idea of Christopher Nolan’s folding Paris, from Inception, and expands it into a series of dazzling, kaleidoscopic effects: The streets of New York and Hong Kong fold and unfold like angular M.C. Escher morning glories.

Those are great effects the first time you see them, and maybe the second. By the end of Doctor Strange, they’ve been repeated so often that they lose much of their magic. Luckily, the actors retain all of theirs. Although the casting of Scotswoman Swinton as the Ancient One, originally an Asian character, caused some controversy when it was announced, Swinton is so totally weird and out-there that her features and skin color are practically beside the point. (And though it’s true that Asians are underrepresented in Hollywood movies, the answer isn’t to cast only Asian actors as Asian characters, but to open the world of non-Asian characters to Asian casting. If we’re doomed to a system of one-to-one matching, racewise, that means we could never have an Asian Hamlet or Lear—or, for that matter, a black, Latino or Native American one.)

Even beneath his somber Samurai garb, Ejiofor can’t hide his obvious pleasure in getting to play, finally, a Marvel character: It’s delightful to see him having so much fun. And Cumberbatch, both a natural comedian and a subtle one, knows how to get a big laugh from nothing more than an arched eyebrow. That’s got to be one of the biggest and most delicate feats of wizardry in this vast and unknowable universe, and Cumberbatch comes by it effortlessly: No ancient Celtic secret needed. 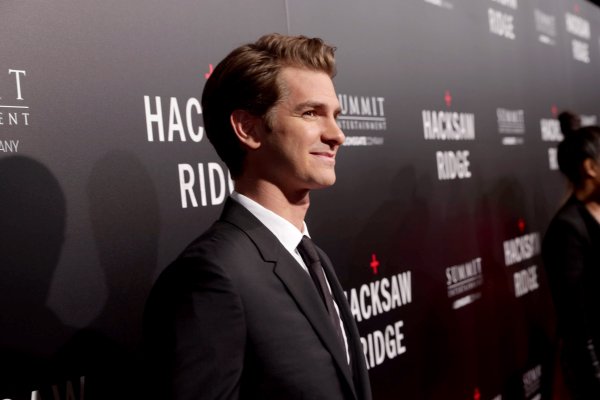 Andrew Garfield on Faith, Politics and the Making of Hacksaw Ridge
Next Up: Editor's Pick