The Vietnam War wasn’t the first war in which black soldiers were funneled into combat by a country that had no other use for them, nor was it the last. But that war was notable for the way it raged even as black Americans at home were struggling for their own basic human rights—which means black soldiers were fighting not one war but two. That’s one of the ideas Spike Lee threads in Da 5 Bloods: four Vietnam vets reunite, in the present day, in the nation where they once fought for reasons that are still not clear to them. Their current mission is double: they’re determined to bring back the remains of their squad leader, killed in combat some 50 years earlier. And they seek to retrieve a cache of forgotten gold they’d stashed in the jungle before his death.

Otis (Clarke Peters), Eddie (Norm Lewis), Melvin (Isiah Whitlock Jr.) and Paul (Delroy Lindo) gather at a hotel in Ho Chi Minh City, greeting one another with wary affection. The bond between them is strong, though slightly frayed: their shared experience unites them, but their lives have scattered them in different directions. Paul has undergone the most radical change: he’s perpetually angry, suffering from PTSD for which he’s never been treated. And, to the surprise of the others, he’s a Trump supporter.

If the others can’t wrap their brains around Paul’s politics, they can see how tortured he is. His son David (Jonathan Majors) has shown up on the trip uninvited, and their dynamic is tense. And Paul is haunted by a secret he shares with the group’s late squad leader, Norman (Chadwick Boseman), whom all of the men revered. He taught them to fight for what you want your country to become. Like all his comrades, Paul is entranced by the idea of that gold, but his quest is ultimately one of seeking clarity and forgiveness.

Da 5 Bloods is an action film, a buddy movie and a drama about the conflicted relationship these men have with their country, a nation that asked them to fight and then slammed door after door in their faces upon their return. The picture has an ungainly shape, and certain dramatic notes don’t resonate with the boldness they need: when a tragedy strikes, the characters barely react. The story keeps moving like a freight train chugging along the track, and the effect is disorienting.

But even when Lee makes a flawed film, his spirit is a kind of braille, a code you can feel and see. Lee will never be satisfied with the status quo, and he reminds us we shouldn’t be either. Da 5 Bloods gets its energy from that jolt of defiance. Lee is a patriot at heart, and that’s always the most moving thing about his work. His connection to the past—not just to the past of black people, but to the painful past of black and white people co-existing, clashing and sometimes, blessedly, coming together—informs everything he does. He closes Da 5 Bloods with a quote from a speech Martin Luther King made the year before he died, in which King quotes Langston Hughes: “O, yes/ I say it plain/ America never was America to me/ And yet I swear this oath—America will be!” Those lines—wistful, even anguished, yet landing in optimism—could be Lee’s theme song. He pushes toward the future we deserve, if not necessarily the one we’ll get. We’re a mess—but o, yes, we will be. 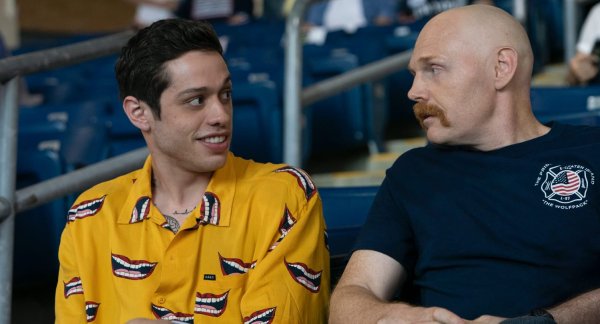 The King of Staten Island Is an Openhearted Comedy
Next Up: Editor's Pick