Here's What the Loki Finale Means for Future Marvel Movies

Warning: Spoilers ahead for the Disney+ series Loki

If you thought you could continue to follow the Marvel Cinematic Universe without watching the Disney+ TV series, you were sorely mistaken. Even though the dramas are playing out on the small screen, they’re having a big impact on upcoming movies. Case in point: Loki just broke the MCU timeline, and every Marvel movie is now going to have to contend with the multiverse.

What this means for the future of Marvel is, well, complicated. There are now many timelines, which means there are likely many Spider-Men and many Thors and many Scarlet Witches in other timelines just waiting to leap onscreen. Oh! And there’s going to be a second season of Loki, to boot.

It’s all part of Marvel’s plan to get you watching, discussing and tweeting about Marvel content all year long. Here’s everything you need to know about how the finale of Loki turns the MCU upside-down.

Loki and Sylvie finally achieved their goal of taking down the Time Variance Authority (TVA). In Loki, Marvel fans learned that the TVA was constructed to maintain the one “true” timeline—the one we’ve seen play out in the Marvel Cinematic Universe (MCU) movies thus far. Any “variant” of a character who diverged from the true timeline, like when Loki (Tom Hiddleston) stole the Tesseract during Avengers: Endgame, would be pruned by the TVA and sent into a terrifying void.

Surely this dictatorial agency that oppresses free will for the sake of order is evil, right? Well, guess again. When Sylvie (Sophia Di Martino) and Loki, the two Loki variants who swore vengeance against the TVA, finally reached the mastermind behind it all, He Who Remains (Jonathan Majors), it turned out that maybe he was the lesser of many (infinite?) evils. And if they killed him, they just might unleash all his much more evil variants.

Loki and Sylvie came to blows over the decision before Sylvie finally stabbed He Who Remains, creating dozens (or perhaps even more?) branching timelines and sending the MCU as we know it into chaos. Most ominously of all, when Loki returns to the TVA, nobody recognizes him. Loki sees that He Who Remains—or some evil variant of him—has become the organization’s ruler.

We certainly haven’t seen the last of He Who Remains. Marvel has confirmed that the character, who also goes by the name Kang the Conquerer, is set to be a major villain in future films.

Loki ends on a rather abrupt revelation: Sylvie and Loki have made a huge mistake. Luckily, sharp-eyed viewers waiting for an end credits scene will have noticed a brief teaser for a second season of Loki. There’s not much info, just a stamp with “Loki Season 2” written on it.

This is the first MCU TV series to tease a second season. WandaVision as far as we know was a miniseries—Elisabeth Olsen’s Wanda will appear in Doctor Strange 2 next year. And Falcon is leveling up from Falcon and the Winter Soldier to his own Captain America film, which Marvel recently greenlit.

It’s hard to say where the next season of Loki will go. Will Loki try to convince Sylvie to help him restore the one true timeline? Or will he venture out into the various parallel universes to try to find his brother and the other Avengers to prevent a Multiversal War?

It will be a real bummer if everything that goes wrong in the MCU for the next decade will be “Sylvie’s fault.” She’s too nuanced and compelling a character to deserve that blame. Let’s all decide to blame Miss Minutes instead because that clock is definitely evil.

We’re officially in the multiverse now

We knew the multiverse was coming ever since the Avengers traveled back in time in Avengers: Endgame and created branching timelines. At the time, the Ancient One (Tilda Swinton) explained to Hulk (Mark Ruffalo) that as long as the Infinity Stones the Avengers stole were returned to their proper place in the timeline, no branching realities would be created. In light of what we’ve learned about the TVA, it seems that the Ancient One was executing their bidding, whether she knew it or not.

Anyway, in the finale of Loki, we learn that He Who Remains—who I’ll call Kang the Conquerer going forward for the sake of simplicity—lived as a scientist on Earth in the 31st century. There, he discovered the existence of multiple parallel universes and started interacting with his variants on other timelines. The good variants played nicely together, exchanging scientific discoveries, but the bad variants, well, they just wanted to conquer the other timelines—hence the name Kang the Conquerer.

The Kang that Loki and Sylvie hunt down harnessed the power of a monster called Alioth—the big, scary purple cloud from the penultimate episode that eats beings and worlds. He used Alioth to subdue the other timelines and created the TVA to maintain the one true timeline. He’s been in control of the Sacred Timeline ever since.

But he’s ready to retire. Unfortunately for Kang, if he’s killed, the timelines will branch, his other, more evil variants will emerge, and all hell will break loose. So he’d really like to find a successor. He offers the throne to Loki and Sylvie. Loki would like to take it: He believes Kang when he says that maintaining the sacred timeline is the only way to prevent a Mulitversal War. Plus Loki has always had a fondness for thrones.

But Sylvie suspects Kang may be lying and believes harnessing individuals’ free will is wrong. So she stabs him and, well, things kind of go crazy. Timelines branch. Owen Wilson’s Mobius forgets who Tom Hiddleston’s Loki is, suggesting time must have been reset or erased in some way, at least in the TVA. And Ravonna Renslayer (Gugu Mbatha-Raw) goes in search of the only man with free will—Kang the Conquerer. (In the comics Renslayer and Kang are an item, so she’s sure to show up wherever Kang does.

The multiverse will likely play a major role in Spider-Man: No Way Home

We’ll likely get to see the Spider-Men pointing at one another meme come to life on the movie screen this winter. It has been long rumored that Tom Holland’s Spider-Man will encounter Tobey Maguire’s Spider-Man and Andrew Garfield’s Spider-Man in the next Spidey movie. And Marvel has officially confirmed that villains from past Spidey franchises, specifically Alfred Molina’s Doc Ock and Jamie Foxx’s Electro, are set to appear in the film.

Now we know how. If Sylvie has indeed opened up branching timelines, and Holland’s Peter Parker can travel from his universe to a parallel one, it really will seem like there’s No Way Home. (Remember when Jake Gyllenhaal’s Mysterio claimed in the last Spider-Man movie that he was from a parallel universe and then mocked Peter Parker for buying his story? Well, at least Peter can feel vindicated when he encounters the multiverse, I guess.)

“No Way Home” may sound rather ominous, but here’s some good news: parallel Spidey timelines may mean that we finally get a live-action version of Miles Morales, an alternate timeline version of Spidey from the comic books (and recent Spider-Man video game). In fact, the Oscar-winning animated film featuring Morales, Spider-Man: Into the Spider-verse, proved that audiences could swallow the whole crazy concept of variants of the same superhero interacting with each other in the first place. Thanks, Spider-Man!

All the pieces are coming together. We know that Scarlet Witch (Elisabeth Olsen)—fresh off discovering her witchy powers in another Disney+ series, WandaVision—is set to appear in the next Doctor Strange movie next year. Given the title of the film, it’s safe to assume that Wanda and Strange (Benedict Cumberbatch) will do some timeline-hopping themselves. Perhaps Wanda will latch onto this method as another way to see the husband and children she created with magic but had to give up at the end of her show.

Kang the Conquerer will return in Ant-Man and the Wasp: Quantumania

Kang warned Loki and Sylvie that there are “thousands” of him, which means that the version who rules the TVA could pop up in that film, or a totally different variant could. Whatever variant they meet will likely be very interested in time travel through the Quantum Realm, as the title Quantumania suggests. The movie is set to premiere in 2023.

The rest of the MCU is getting a lot bigger

It’s unclear if the branching timelines will affect the plot of a movie like Shang-Chi, which is set to debut in September, or Eternals, set for November, or Thor: Love and Thunder, out next year.

The branching timelines could be a useful plotting device. They could explain why the Hulk vision Abomination, a villain we thought was long gone in the MCU, shows up in the trailer for Shang-Chi. Maybe these characters exist on another timeline. The plotting device might also offer some clarify as to why the Eternals didn’t show up in previous movies to help the Avengers defeat Thanos. Maybe Thanos wasn’t the greatest threat—a Multiversal War was, and that’s why they’re now finally coming out of hiding…or something.

Marvel revealed at 2019’s Comic-Con that Jane Foster (Natalie Portman) will wield the hammer as a female version of Thor (who was previously played by Chris Hemsworth) in Thor: Love and Thunder. It’s possible that Thor’s hammer Mjölnir will simply consider Jane worthy, and she’ll be able to take up the weapon. Or we could be meeting an alternate timeline Jane where she, not Thor, became the Goddess of Thunder.

Heck, branching timelines could be a way to introduce the X-Men and Fantastic Four without awkward questions about where these characters have been in the main timeline for years and years.

The possibilities are endless. And things are just going to get more and more interconnected—and, undoubtedly, crazier.

The original version of this story misstated the name of one of the actors who plays Spider-Man. It’s Tom Holland, not Tom Hiddleston. 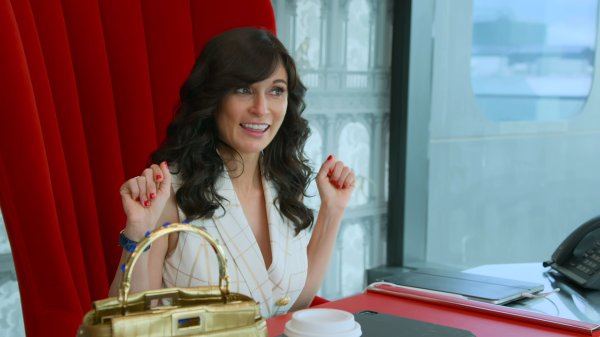 My Unorthodox Life Is More Bravo Docusoap Than Unorthodox
Next Up: Editor's Pick