Thanks to fans of Spongebob, Mr. Krabs, Patrick, Squidward, Sandy and Plankton, Spongebob Squarepants has become ubiquitous. You can’t seem to log onto social media without coming across some Spongebob memes.

“I can’t think of anything else like it,” Tom Kenny, who has voiced the titular role of Spongebob since the pilot was taped in 1997, tells TIME. He calls Spongebob memes “very relatable but very good-natured, and that just makes me happy.”

While social media can often be a place for hate and vitriol, people tend to give Spongebob a special, kinder treatment, which Kenny appreciates. “I just love that these people are really funny,” he says of meme-makers. “They think of things that I wouldn’t think of.”

Hillenburg’s series, which has always run the gamut of emotions, from goofiness to genuine anxiety or sadness, is “all love,” Kenny says. “He almost gave it this bulletproof vest.” Beyond the happy nature of the show’s characters and plot points, they also lend themselves easily to meme creating. “The characters are complex, but they’re also simple,” Kenny says. “There’s so much for meme makers to work with.”

Here’s your guide to the best Spongebob memes.

Why are there so many Spongebob memes?

On Know Your Meme, the internet’s primary database for all things meme-y, Spongebob Squarepants memes currently accounts for 4,635 images. To put that in context, other films and TV shows that make common meme fodder include the Marvel Cinematic Universe, which is only featured in 276 images, and The Simpsons, which has 1,116 images.

“Overall, if you look at our database, there are few other pop culture properties that are as frequently used in memes as Spongebob,” says Matt Schimkowitz, a senior editor for the site whose job entails sifting through and organizing Spongebob memes submitted by users, as well as defining and explaining the best Spongebob memes. “You can compare him to things like The Simpsons, or Shrek, or the Marvel movies, and Spongebob just has way more specific formats that have been repeated again and again.”

Schimkowitz says a combination of factors make Spongebob memes so popular — nostalgia for the past, for one, and the fact that the cartoon was made for children actually makes it easier to design memes. Another reason? Emotions.

“Pop cultural figures that become very meme-able have a lot to do with their ability to express specific emotions. And Spongebob — and the characters on Spongebob — are incredibly direct in what emotion they’re trying to express,” he says.

“There’s no real subtlety in terms of when Spongebob is happy, or when he is sad, or when he is angry,” Schimkowitz continues. “He just is those things, which makes it much easier for people online to use them essentially as emojis and share them to express how they’re feeling about a particular subject.”

One more reason: Spongebob’s fame. The yellow sea sponge’s recognizability is also one of the pulls.

“Everyone knows who he is, so it’s incredibly easy to recognize where these memes are coming from,” Schimkowitz echoes, adding that he’s basically become the “emoji” for this generation.

And that’s a great thing, Kenny says, because there’s nothing inherently negative about the show. “Spongebob is all love,” he says.

Read on for the origin stories for some of the best Spongebob memes, including Kenny’s favorite.

It’s hard to go one day without seeing mocking Spongebob on Twitter. It’s one of the most simple memes, as it requires no overlaid text. It’s just Spongebob’s mocking, critical face that says it all — and Kenny tells TIME that it’s definitely his favorite.

It’s also known as the Spongebob chicken meme, because in the episode this image comes from, Spongebob was literally acting like a chicken. The episode, “Little Yellow Book,” originally aired in 2012.

But beyond just the facial expression, the meme is now used in another specific way: repeating phrases with alternating capital letters. For the uninitiated, Know Your Meme’s entry on the meme calls this version a “call-and-response” meme, and says that its first use was on Twitter in 2017. It cites the first original user as @OGBEARD, accompanied the image with the words, “How I stare back at little kids when they stare for too long.”

The caveman or primitive Spongebob meme, also called SpongeGar, shows Spongebob characterized as — you guessed it! — a caveman. This moment originates from an early episode from 1999 when Patrick travels to the pre-historic era, according to KnowYourMeme, but the actual SpongeGar character is a different prehistoric sponge (one of Spongebob’s ancestors, who first appeared in the season 3 episode entitled “Ugh” in 2004).

The caveman Spongebob meme, with Spongebob standing with his arms and legs spread out, can be used to describe an awkward, stressful or uncomfortable situation, or a moment when you may need to brace yourself. Often combined with the “when it’s…” format of memes, this image of primitive Spongebob is typically layered onto another background.

Tired Spongebob uses an image from seasons 1 episode 8. Spongebob is naked because he’s decided to leave behind his regular life in order to live among jellyfish.

People mostly use the meme any time something makes you too exhausted, stressed or winded, and it also tends to be accompanied by the widespread “me after [I do something]” construction.

Squidward Looking Out the Window meme

In typical Squidward fashion, this meme comes from a moment of the character’s frustration at Spongebob and Patrick, as he watches them with contempt as they play outside his home. The scene is from season 7 episode called “That Sinking Feeling.”

The Squidward meme can be used either to show what it’s like to watch something that looks undesirable and annoying, or something you’re jealous and wistful of. In other words, it’s the best meme for those “FOMO” moments.

‘No, This is Patrick’ meme

The “No, this is Patrick” meme is another in-joke among fans, but it’s also a universal meme can also be used in various situations. In classic Patrick form, voiced by Bill Fagerbakke, the humanlike starfish gets upset on the phone when a caller to the Krusty Krab restaurant asks, “Is this the Krusty Krab?” Unable to understand that the potential customer just wants to know if they’ve reached the line of the restaurant, Patrick, who was only recently employed, goes from affable to increasingly angry, repeating the line, “No, this is Patrick!”

Finally, the scene ends when Spongebob explains, “Uh, Patrick, that’s the name of the restaurant,” he says.

The scene comes from season 2, episode 23, according to Know Your Meme. The meme is most often used just how Patrick used it in the episode, in responding to someone asking who you are — or when someone’s annoying you.

It was even used as a reply to a viral tweet asking whether an animal was a bird or bunny.

Of course, the TV show had to get in on the joke, too. Spongebob’s Twitter page shared a video of Fagerbakke re-recording the scene in real life.

The Sleeping Squidward meme comes from the season one episode called “Home Sweet Pineapple,” when Squidward awakes to remember that Spongebob and Gary are sleeping in bed with him.

The way his eyes blink wide open illustrate the feeling of suddenly remembering something. It began with the words, “when you’re about to go to sleep and you remember you have homework.” This meme should be used “when you remember something important in a flash of terrifying clarity,” according to Esquire.

Some people also use a version with Squidward’s eyes closed in both frames.

What makes this meme special to Kenny is the way it demonstrates darker layers that Hillenburg hid throughout the show. “A lot of the memes are about anxiousness and anxiety, and Spongebob has a lot of that hidden,” Kenny says. But it’s the lightheartedness of the show is made with that helps bring so much joy, too. “That’s what makes us human, is the ability to laugh in the face of awfulness.”

The savage/evil Patrick meme also comes from the season one episode entitled “Nature Pants,” shortly after the moment captured in the tired Spongebob meme.

Consider this meme the best spongebob meme to use when you want to seem savage or evil. It’s really that simple. 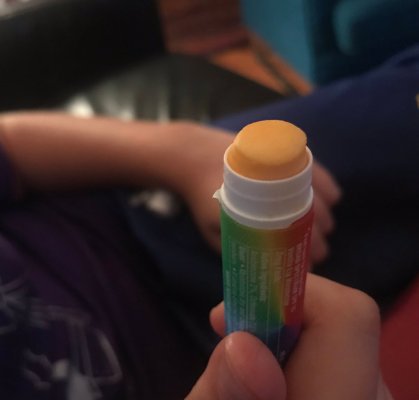 Promising Young Woman Wisely Fills Lip Balm Tube With Cheddar Cheese and What Have You Accomplished Today?
Next Up: Editor's Pick