Swedish director Roy Andersson’s About Endlessness is a scroll of 1,000 questions that would fit in a walnut shell, a seemingly unassuming movie that might dredge up feelings you didn’t know you had. It’s meditative, mournful and gently funny, and celebratory, too, but in a muted way. If you don’t know what kind of movie you’re in the mood for, this may be the one. It’s a tonic for listless times.

About Endlessness doesn’t tell a single story. Instead, it glides from one vignette to another, carried along by the matter-of-fact observations of an unseen female narrator (Jessica Louthander), a tributary moving toward some larger reservoir of ideas: “I saw a man with his mind elsewhere,” she says, as we watch an elderly waiter who seems to be lost in time pour red wine into the glass of a portly, well-dressed businessman. Only he doesn’t stop pouring—the wine glugs into the glass well past the point of overflowing. Seeing what he’s done, he dabs at the stained white tablecloth with silent desperation, as if his brain had only just returned from its short out-of-body jaunt.

What does this wordless miniature mean? None of About Endlessness is easy to explain in words, yet somehow the images, and the spare strands of dialogue accompanying them, unlock some of the little doors behind which we keep our own anxieties and longings. If you’ve seen Andersson’s 2014 A Pigeon Sat on a Branch Reflecting on Existence, you’ll be prepared for this movie’s dandelion puffs of off-kilter humor, and for its deadpan exploration of the textures of everyday living. For most of us, in between moments of despair and joy, there are long stretches of just getting by. But maybe those are the moments that would tell a stranger the most about us: One of the sketches in About Endlessness shows a man who, wary of banks, keeps his savings in his mattress. In another, we see a woman wheeling a baby carriage whose heel has broken off her shoe, a momentarily perplexing problem she must find a way to solve. The movie’s images are rendered in soft, suedelike tones, mauves and grays and shadowy taupes, colors that speak of either giving up or hanging on, depending on your mood. These aren’t definitive colors; there are questions baked into them.

A horrific dreamscape in 'About Endlessness'
Courtesy of Magnolia Pictures

Most of the movie’s tableaus—like the one featuring the distracted waiter—are one-offs. Hitler even makes a guest appearance. But there’s one story that connects all these vessels into a loosely unified flotilla: A man (Martin Serner) awakens from a nightmare in which he’s forced to carry a heavy wooden cross through the streets, while being flogged and ridiculed by spectators. His wife tries, and fails, to comfort him. We later see him in the office of a psychiatrist (Bengt Bergius), where he lays his suffering bare. He fears he’s losing his faith in God. This is significant, because we now see, from his clerical collar, that he’s a priest.

The doctor, who has been listening patiently, responds with the understatement of the year: “That’s not a pleasant situation, I must say.” The priest’s story unfolds gradually, with other stories nestled between its chapters. He gets drunk on communion wine and stumbles through the Eucharist. Later—in a scene staged like a low-key riff on a Marx Brothers routine—his words stream out in an anguished, quavering wail: “What should I do now that I’ve lost my faith?” It’s terrible, but it’s also disquietingly funny. Andersson is expert at framing those moments when we don’t know whether to laugh or cry.

Is About Endlessness a bummer? Perhaps a little. But it’s also delicately rapturous, as attuned to life’s eternally blossoming beauty as to its cruelty. The movie’s most enduring image is that of a man and woman—wearing what appears to be 19th or early 20th century dress—wrapped in one another’s arms, floating through the grayed skies high above a cityscape. Our narrator friend explains what we’re seeing, to the degree that it can ever be explained: “I saw a couple, two lovers, floating above a city renowned for its beauty but now in ruins.”

A city in ruins is a distressing sight, a tragedy most of us would want to turn away from. But these lovers are calm. They’ve created their own dream, and it’s enough to hold them aloft. They might be ghosts, which would mean they’re no longer troubled by the same questions that nag at us living humans. There’s freedom in that—but for now, aren’t we better off being alive and eager to ask the questions? That’s the conclusion Andersson moves toward. His movie is like a gentle but powerful tornado that picks you up in one place and sets you down in another. Where am I? How did I get here? Can I go back to where I was before? Our questions run circles around themselves, through our whole lifetimes, but maybe the questions are answers by themselves. You can’t make peace with wonder. 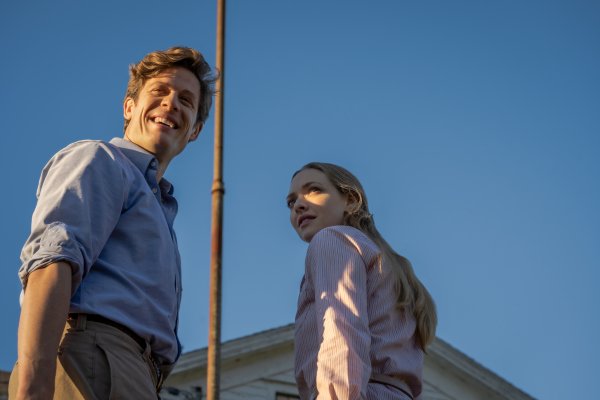 What to Know About the Real-Life Inspiration Behind Netflix's Things Heard & Seen
Next Up: Editor's Pick