The Story Behind The Sons of Sam, Netflix's True Crime Docuseries About David Berkowitz

When the serial killer David Berkowitz, who called himself Son of Sam, was arrested on Aug. 10, 1977, it seemed to mark the end of an era of terror that had gripped New York City for months. Beginning in the summer of 1976 and continuing into 1977, Berkowitz killed six people and wounded seven others, shooting them with a .44 caliber revolver. While his arrest, guilty plea and imprisonment spelled the end of the case to the general public—and brought a semblance of peace to the city—for some, questions remained over whether Berkowitz, who currently remains in prison, carried out his horrific acts alone.

These questions—and one man’s obsession with uncovering what he perceived as the truth—drive The Sons of Sam: A Descent Into Darkness, a four-part Netflix documentary series out May 5 from filmmaker Joshua Zeman. Where the first part of the series delves into the horror wrought by Berkowitz’s violence, the latter part focuses more on Maury Terry, an investigative journalist who became convinced that Berkowitz was connected to a much deeper conspiracy and dedicated his life to exposing his findings, refusing to stop even when the facts contradicted his beliefs.

An obsession with claims that didn’t seem to add up

A scene from 'The Sons of Sam'
Netflix

Terry began poking holes in the Berkowitz case soon after his arrest. At the time, the case had become notorious in part due to Berkowitz’s public taunts in the form of disturbing letters to police and to the media as he eluded capture. In one, Berkowitz called himself a “Beelzebub” and “the Chubby Behemouth” and wrote, “I live for the hunt—my life.” The case remained high-profile after his arrest, when Berkowitz claimed that he had carried out the violent crimes based on orders from a demon-possessed dog belonging to his neighbor, Sam Carr.

To Terry, the claims didn’t fully add up: Beyond the many gaps in Berkowitz’s story, police had been slow to catch him in part due to other discrepancies, including police sketches that did not resemble the suspected killer and a lack of obvious connection between the murders. He became convinced Berkowitz could not have acted alone. Finding that police, eager to move on from the case, were satisfied with having apprehended Berkowitz and unwilling to consider that others had been involved in the killings, Terry decided to investigate the case himself.

The independent investigation then took an even darker path. Zeroing in on Berkowitz’s nickname, “Son of Sam,” Terry turned his attention to Sam Carr—the neighbor, whose two sons, John and Michael Carr, had previously been associated with Berkowitz. Terry’s findings took him to Untermyer Park in Yonkers, an area known to be a popular site for Satanic rituals, where Berkowitz and the Carr brothers allegedly spent time together. The more he dug, the more Terry grew convinced that the three had worked together to carry out the murders and, moreover, that they had all been a part of a Satanic cult called “The Children.”

As the series shows, the connections Terry continued to find led to further conspiracy theorizing on his part—he was fascinated that “The Children” was tied to another Satanic cult, known as “The Process,” which was alleged to have been associated with Charles Manson. After years of research, Terry’s findings were published in a book called The Ultimate Evil: The Search for the Sons of Sam, where he put forth the allegation that a network of murderous cults led to the Son of Sam murders, to show why he believed Berkowitz had worked with others in the killings.

While Terry’s speculation seemed unbelievable to police, The Sons of Sam spends a lot of time laying out how his theories didn’t spring out of nowhere. He linked the Son of Sam murders to occult-related crimes and other acts of violence committed around the U.S., arguing that a Satanic culture was thriving in the country (forming a kind of precursor to the Satanic Panic that would later grip the country), based on letters he received from Berkowitz and stories Berkowitz told others in prison.

From this point, Terry became a figure of tabloid television, appearing on programs like Geraldo Rivera’s 1980s talk show, where he’d often discuss unsubstantiated theories on Satanism and ritualistic cults. Clips included in the series’ final episode show Terry’s eventual one-on-one conversation with Berkowitz—during which Berkowitz claims that he did work with a cult. At the same time, as the footage reveals, Terry’s questioning of Berkowitz was incredibly leading, leaving the convicted killer’s claims unsubstantiated.

Terry died in 2015 and doesn’t appear in The Sons of Sam. But the series includes interviews with his ex-wife, his friends, other journalists who covered the case and former detectives, along with narration of Terry’s work voiced by Paul Giamatti. Taken together across the four episodes, the stories about and from Terry show a man who was desperate for an answer that’s impossible to find. Ultimately, his investigation uncovered not a broad conspiracy of Satanic cults, but a much darker truth: horrible and evil things happen—and more often than not, there isn’t really an answer as to why. 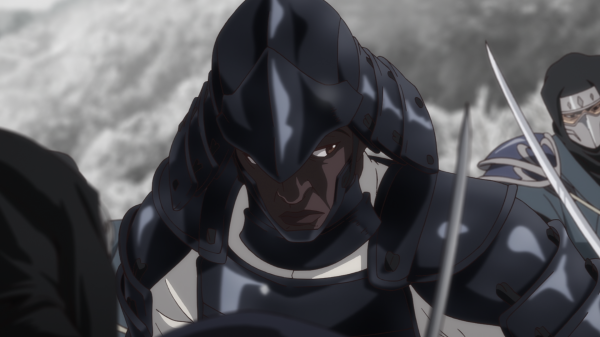 How Yasuke Paves a New Path for Black Creators in Anime
Next Up: Editor's Pick