New Yorkers are marking a grim milestone on Thursday: 40 years since the serial killer David “Son of Sam” Berkowitz was arrested for terrorizing the city with his signature .44-caliber revolver in a crime spree that ran between the summer of 1976 — also known as the “Summer of Sam” — and into 1977. It left six dead and seven wounded.

And while many killers might be expected to lay as low as possible, what particularly terrified city residents was the brazen way the Army vet and postal-service worker drew attention to himself. He wrote letters to police detectives and the acclaimed New York City tabloid columnist Jimmy Breslin, including one that said he “can’t stop killing.”

Four decades later, they still have the potential to scare:

New Yorkers were desperately trying to make sense of his targets. “If terrorists might well pose a greater potential danger to more people, there was much more apprehension of the threat of random shots in the dark from the lone gunman,” as TIME described his reign of terror. “He has haunted lovers’ lanes, attacked couples coming from strobe-lighted discotheques, even opened fire at a pair of girls on a house porch and shot another as he passed her on a street.”

Women flooded the police tip line, hitting up the call center with 100 calls an hour, TIME reported. A police official told the magazine, “Women are naming their husbands, their ex-boyfriends. People are calling in about their co-workers.” Women with long brown hair were advised to either get shorter haircuts, bleach their hair, or wear it in a ponytail when it was noticed that he was targeting women with a certain look, TIME reported in 1977. Parents also insisted their daughters have their dates at home, while some girls just decided to dress in baggy clothing or skip dating altogether until cops caught the killer.

Police caught Berkowitz on Aug. 10, 1977, after finding a parking ticket that traced his getaway car to his home address. He was arrested right before his plans to terrorize a Hamptons nightclub and “go down in a blaze of glory.” He pled guilty in 1978.

He later admitted that the nickname he gave himself in the letters, “Son of Sam,” was inspired by a dog that belonged to his neighbor Sam Carr, and his belief that the dog told him to kill. He later became a born-again Christian who re-named himself “Son of Hope.” 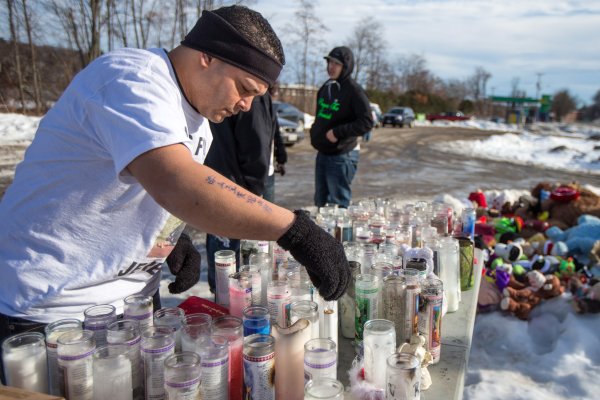 Woman Whose Son Was Found Dead Pleads Guilty to Abusing Surviving Children
Next Up: Editor's Pick