Clash Coming: Joe Biden and Mitch McConnell Are Preparing for a Spending Standoff

It’s not in our nature to peacefully hold two contradictory thoughts at the same time. The friction isn’t something we are wired for; the cognitive dissonance usually forces us to change or ignore one of those thoughts. It’s how only a small sliver of people can believe bleu cheese is both a delicious indulgence and disgusting pile of visible mold. The rest of us pick a camp and stay there because, eventually, most people ditch the idea they are least loyal to.

In Washington, however, contradictory realities can co-exist for months… or longer. Take Joe Biden’s big-ticket infrastructure and family plans. They are simultaneously incredibly popular across this country and politically dead in the water at the moment.

Biden and his Cabinet have been hitting the road, pitching the plans’ components and trying to build pressure on hold-out Republicans. They’re trying to boost the public’s familiarity with the broad ideas and put some ornaments on this Christmas tree — pre-K for young families, two years of free community college for young voters, tax credits for childcare and job-training for the promised green economy. If this once-a-generation boost is going to come, it’s going to require a national backing so strong that it’s politically untenable to block it.

“There’s overwhelming bipartisan support for this,” Biden said yesterday during a stop in Portsmouth, Va. “You look at the polling data: Republican voters overwhelmingly support it. Now I just got to get some of my Republican colleagues to support it.”

Biden’s not wrong. When explained to voters, it’s a rare political winner in all corners. Who doesn’t want to see their town’s bridge fixed, or the option to ditch exorbitant private day care for their four-year-old? But Biden may also discount Republicans’ tenacity. While he is out there sloganeering to Build Back Better, the Republicans are countering with Block Biden’s Bet. The public is taking note of their obstructionism: the ABC News/ Ipsos poll released Sunday found 67% of Americans think Republicans have done too little to compromise, with even 37% of Republicans joining in that bloc. When asked the same question about Biden, only 39% of Americans think he’s done too little to compromise.

But it might not matter if the GOP is making the bet that blocking legislation, wherever the effort originates, will sour voters an all-Democratic Washington and punish the party during next year’s midterms. Historically, the party in power in the White House doesn’t do well in midterms.

Hours before Biden visited Virginia, where the state’s two Democratic Senators are going to be yay votes for almost anything Biden puts forward on infrastructure, the top Republican in the Senate was meeting with reporters in his home state of Kentucky. Senate Minority Leader Mitch McConnell said Biden’s proposals for jobs and families — topping $4 trillion in costs, to be paid for by tax hikes to business and wealthy individuals’ investments — would attract zero votes in its current form. While Democrats have a technical path to push ahead with these ambitious ideas with a bare majority, as they did with Biden’s COVID relief package, it’s not clear if all of the Democrats would support a go-it-alone route again — which means Biden has to convince 10 members of McConnell’s highly disciplined caucus to come aboard.

McConnell hinted he could see some collaboration with Democrats, but only if the price tag stays around $600 billion and no one touches the Donald Trump-era tax cuts from 2017 that took the corporate rate from 35% to 21%. Oh, and inside the $568 billion Republican counter-offer, only $189 billion of it is actually new money and the balance is just reprogrammed cash already carrying Congress’ approval.

Democrats, meanwhile, aren’t exactly helping Biden here. Democrats have, in theory, the narrowest of political majorities in the House, an effective majority in the Senate with Vice President Kamala Harris’ tie-breaking vote, and control of the White House. But there’s not exactly a coxswain setting the pace for the team wearing blue jerseys. They have big ideas — and even bigger divisions on how to get them done. Sen. Joe Manchin of West Virginia has said he won’t support any infrastructure bill that can’t get Republican votes. The pair of maverick-lite Senators from Arizona — Democrats Kyrsten Sinema and Mark Kelly — have also shown little interest in jamming things through without cross-aisle pollination. All the while, folks like Sen. Chris Coons — a staunch Biden ally — are resisting any suggestion to annihilate the filibuster, a procedural hurdle that would let either party run the table on all legislation with just 50 votes.

Publicly, Biden has insisted that he’s looking to work with Republicans on these plans. But he also wanted to do that on his first pandemic-relief package, only to see it get goose eggs from the Republican lawmakers, who said it was a hodgepodge of liberal wishlists. Biden has started to indicate he won’t be strung along like Democrats were in 2009 and 2010 on an economic stimulus package and a health care overhaul. (We’ve written about that Lucy-and-the-football tragicomedy in this newsletter before.) Last week, he seemed to tell the Senate to get real or expect to be shut out. “If, like last time, they come in with one-fourth or one-fifth of what I’m asking and say, ‘That’s a final offer,’ then … it’s a no-go for me,” he told reporters on Thursday.

A few days later, Biden’s senior adviser Antia Dunn was seeming to up the ante again, telling CNN that facts would dictate strategy. “He wants to move this package forward in a bipartisan way,” Dunn said Sunday, leaving the most important part for the end of her answer: “if that’s possible.”

McConnell’s proposed new spending is a fraction of what Biden is seeking. It remains possible that Biden’s plans become so popular that any Republican will take heat for not backing them. It’s also possible that Republicans simply don’t care as polling numbers tick upward, and are calculating they won’t have to pay a price for their obstruction next year. It might not make much sense, but two competing ideas can co-exist. In Washington, that duality is often mandatory, especially on the big-ticket items like these. Effective leadership in Washington often means being like the people Team Bleu Cheese: being able to see both realities. 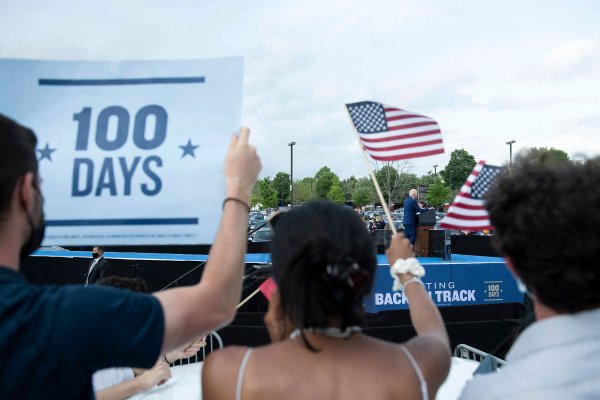 100 Days, the Global Pandemic Edition
Next Up: Editor's Pick