The Wheels Seem to be Coming Off Democrats’ Infrastructure Plans

The week began filled with optimism for Democrats’ ambitions. The Senate rules maven said unexpectedly that Democrats could use the procedural equivalent of a quadruple jump in Olympic ice skating to steamroll a massive infrastructure bill into law with only Democratic votes.

Then West Virginia’s Sen. Joe Manchin, a Democrat from the second Trumpiest state in the country, said he wasn’t signing onto the plan as President Joe Biden introduced because it goes too far in hiking the corporate tax rate. The progressive wing of the party pushed for a bigger package than the $2 trillion as introduced. And the top Republican in the Senate pretty much promised no GOP collaboration or support from across the aisle.

So Biden threw the White House’s doors open for “compromise.” Inaction, Biden said yesterday, wasn’t an option. Hours later, Manchin was again causing indigestion for his party, publishing an op-ed in The Washington Post that basically declared he was out if Republicans wouldn’t play ball. And then the 10 Republicans who had flirted with the Biden White House on the COVID-19 package said their proposals last time weren’t actually considered and suggested they don’t really feel like repeating that frustration again.

By nightfall, the White House was trying to salvage the mess with a thread on Twitter about the underlying plan’s merits.

Progressives who have been down this road before stewed. Such a quest for Republican support has time and again proven a false chase in recent years, especially on legacy-making projects like Biden’s first COVID-19 relief package or Barack Obama’s stimulus and health care laws. On the final point, Democrats for months chased Republican support in negotiations. Finally, one of those negotiators said the soft-part aloud when Sen. Mike Enzi told a Wyoming town hall that he was never going to support what became Obamacare but merely was forcing Democrats to whittle down their ambitions. Still, Republicans successfully introduced 188 changes to the bill, according to a New York Times analysis.

Put simply, it’s not in Republicans’ interests to give Biden a win here. They ran this playbook during Obama’s first term. While they weren’t able to stop Obamacare, they did grind D.C. to a slower pace. And voters in the 2010 midterms rewarded the Republicans and their fearmongering about Obamacare with a net pick-up of six Senate seats and a 63-seat swing in the House. It was, in Obama’s own words, a “shellacking.”

Building roads and bridges may be harder to demonize than “death panels” and a “government takeover” of healthcare. But it would still be simpler for Democrats to get it done without having to wrangle with their Republican colleagues. So hopes for Biden’s plan for a massive infrastructure investment rose like a rocket Monday when the Senate parliamentarian made her decision. But by mid-day Thursday, its odds grew longer as Biden faced at least one-defection-too-many from his fellow Democrats and probably zero interest from opposition Republicans.

Still, it’s Washington and we are nothing if not a city that knows patterns. Talks will unfold, where Biden will probably trade away pieces of the bill. Mitch McConnell, for instance, has said he prefers it not to raise taxes, add no red ink and focus solely on hard projects like bridges and roads. Well, those first two are often pretty contradictory goals without deep cuts elsewhere. But Biden will make some creative attempt to meet McConnell in the middle. It’ll undoubtedly enrage his left flank, making even a victory for Democrats taste bitter. And, if history is any guide, the plan will still sway zero Republicans.

Which leaves us at this point: Manchin is still in the middle. As we wrote back on March 10, Manchinology might be what drives the possible in Washington, at least for the next two years. And right now, unless there’s a big bipartisan bow around Biden’s Build Back Better agenda, it’s not going to get Manchin’s blessing. At least for now, Republicans aren’t showing up with rolls of ribbon, but progressives might show up with shears. 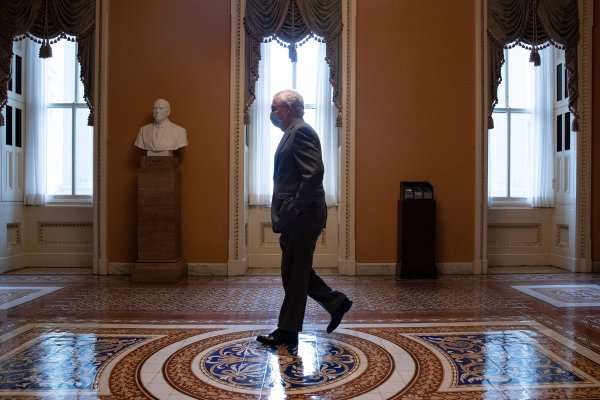 Mitch McConnell Tries to Have it Both Ways on Corporate Cash
Next Up: Editor's Pick