Because superhero movies are here to stay, you almost can’t blame filmmakers for trying to reclaim them—for believing they can make better ones, or at least just smarter ones, than those that emerge from the tireless Marvel and DC Play-Doh Pumper. Thunder Force, starring Melissa McCarthy and Octavia Spencer as a duo of superpower-enhanced Chicago crime fighters, isn’t exactly better than a typical Marvel movie: this is a modest affair, with minimal (though perfectly adequate) special effects, and a plot that takes way too long to get cooking. But in some ways it is smarter, only because its writer and director, Ben Falcone, takes the liberty of letting the air out of the dull virtuousness of the superhero formula, at least some of the time. This comedy-superhero-adventure hybrid is at its best when it tosses the formula completely and gives in to the idea that a superhero movie can really be anything, even a romantic comedy. Thunder Force drags until roughly its last third, and then something remarkable happens: its gonzo spirit kicks in. From that point on, Thunder Force feels crazily, joltingly alive, as if it were realizing, a little too late, that it ought to have been a different movie altogether.

Thunder Force begins with a protracted backstory, set in 1983 Chicago: Cosmic rays have instigated genetic transformations in humans with sociopathic tendencies, granting them superpowers. These supercharged evildoers are known as Miscreants, and mere mortals are powerless against them: regular humans are immune to the rays’ effects. Against that backdrop, two future crimefighters meet as misfit schoolgirls: Emily is a brainy loner, and an orphan; Lydia is an awkward student who doesn’t apply herself. These two will grow up to be, respectively, a rich, famous scientist (Spencer) and a beer-guzzling forklift driver (McCarthy).

As teenagers, the two had a falling out, though Lydia, who has long missed her friend, forces a reunion. Emily has devoted her life to figuring out how to infuse regular humans—as opposed to sociopaths—with superpowers, and she’s getting close to reaching her goal. Because the not-very-bright Lydia is always, of course, stumbling into trouble, she accidentally subjects herself to Emily’s superpower-granting experiment, eventually gaining superstrength. (This process takes an inordinately long time, inviting inertia to creep right into the movie’s veins.) When Emily sees how well her superhero treatment has worked on her friend, she subjects herself to a slightly different procedure, which successfully renders her invisible. Lydia and Emily join forces to fight a corrupt mayoral candidate—Bobby Cannavale’s The King—who has enlisted two Miscreants, Pom Klementieff’s Laser and Jason Bateman’s The Crab, to do his dirty work.

Much of Thunder Force is superhero business as usual, with some comedy thrown in, and writer-director Falcone paints himself into some corners he can’t get out of. For one thing, Spencer, a marvelous comic actor, gets almost nothing to do—as “the smart one,” she’s stuck being sensible most of the time, or invisible, which isn’t much better. And Lydia has been conceived as just another version of the not-very-bright but essentially good-hearted person McCarthy has played before, particularly in the dismal Tammy, which she and Falcone, who is her husband, cowrote. McCarthy is an actor of extraordinary gifts: she brought infinite shadings of self-doubt and majestic prickliness to her role as the misanthropic but enterprising writer Lee Israel in 2018’s Can You Ever Forgive Me. But her comic roles haven’t always served her as well. While self-deprecation is a reliable engine in making comedy work, McCarthy has too often played characters who cross the line into self-abasement. It’s as if she’s driven by some false sense that her characters have to be aggressively “regular,” even possibly inferior, for people to relate to them.

But here’s the catch: McCarthy is almost always good, even when her movies are terrible. Even in Tammy, she could often get a laugh with a terrible line—perhaps one she herself wrote—through the miracle of her timing. Through too much of Thunder Force, McCarthy makes do with dialogue and situations that are serviceable at best. But when she meets Bateman’s mutant crab-man during an attempted robbery, and the sparks fly, Thunder Force springs weirdly to life.

Falcone first gives the duo a fantasy pas de deux, set to Glenn Frey’s schmaltz-ballad “You Belong to the City,” where the two twirl themselves into a gauzy dream of a love affair, Bateman done up in a cartoony mullet, McCarthy decked out in a sparkly jumpsuit. The sequence is totally stupid, in the grandest possible way—I could watch it over and over again. Later, in a scene that riffs on primo Batman–Catwoman vibes, Lydia and The Crab go on a date: The Crab, who has crab claws for hands, has difficulty handling his martini glass, and Lydia, her empathy revealing itself as her finest superpower, takes care not to make him feel bad about it. This scene is ridiculous, and sublime: Bateman and McCarthy pick up on each other’s cues and run with them, spinning them into a whirl of romantic absurdity that gets funnier the longer it goes on. It’s the kind of scene that can both enliven a movie and live beyond it, and it’s just one small example of what McCarthy can do. At her best, no genre can limit her. 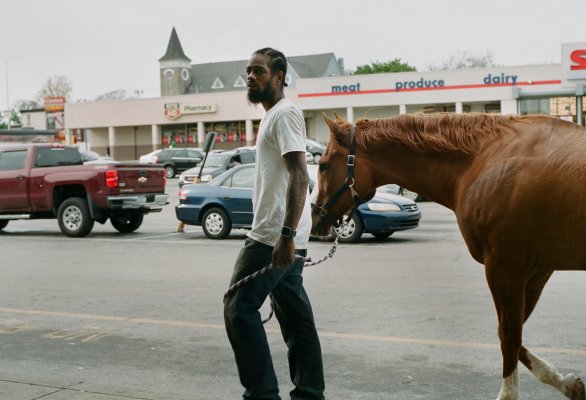 The True Story Behind the Movie "Concrete Cowboy"
Next Up: Editor's Pick