The True Story Behind the Movie Can You Ever Forgive Me?

For a collector, the price of a celebrity letter is as much determined by its content as the name signed on the end. The juiciest letters, the ones that offer some hint of Ernest Hemingway or Dorothy Parker’s inner lives, fetch the highest prices. For Lee Israel, a celebrity biographer by trade and the subject of Melissa McCarthy’s new movie Can You Ever Forgive Me?, the best way to acquire such letters was to buy an old typewriter, do a bit of research and bang one out herself.

Israel had been a moderately successful celebrity biographer through the 70s and 80s, writing books about actor Tallulah Bankhead and journalist Dorothy Kilgallen. But in the late 80s, Israel’s career went into decline and she began selling forged letters of dead writers and actors in order to get by. She was eventually brought to trial by the FBI and sentenced to six months under house arrest and five years probation, but not before she had forged more than 400 letters, some of which remain in circulation to this day.

Can You Ever Forgive Me?, released on Oct. 19, is based on Israel’s memoir of the same name. Directed by Marielle Heller (The Diary of a Teenage Girl) and starring McCarthy as Israel, the film tells the story of her transformation from writer to forger after her career as a biographer goes into a tailspin. McCarthy was nominated for an Academy Award for Best Actress for her performance. Her co-star Richard E. Grant was also nominated, for Best Supporting Actor, and screenwriters Nicole Holofcener and Jeff Whitty were nominated for Best Adapted Screenplay.

Here’s what the movie gets right and what it doesn’t.

Israel, portrayed in the movie as a depressed misanthrope with a drinking problem, refers again and again to what seems to be her one real human connection in the past — her relationship with her (ex) girlfriend Elaine (played by Anna Deavere Smith). Near the end of the movie, Israel and Elaine meet again, and it becomes apparent that Elaine has moved on even if Israel, who had pushed her away in the first place, has not. Like many of the movie’s characters, Elaine is a real person. In her memoir, Israel describes falling in love with “a brilliant, beautiful bartender named Elaine, a lapsed Catholic who now observed only Bloomsday and St Patrick’s — the first with solemnity, the latter with wretched excess.”

Israel published Estée Lauder: Beyond the Magic in 1985. The book ended up contributing to the collapse of Israel’s career as a biographer. Lauder herself had offered to pay Israel not to write the biography, and when the author refused, Lauder published her own memoir, which undercut the sales of Israel’s book. Rushed out to beat Lauder’s book to market, Israel’s biography was poorly reviewed — in the The New York Times Book Review, Marylin Bender wrote that Beyond the Magic “comes off as a cut rate job.”

Fact: Israel began selling letters in order to pay for treatment for her sick cat

In the film, Israel takes her cat to the vet, but is short on cash to pay the bill. In her memoir, Israel also claims that she was unable to pay the vet bills for her cat Doris. While researching an article at the Library for the Performing Arts at Lincoln Center, Israel says she stole three letters by Fanny Brice and sold them for $40 each. She claimed she felt no guilt for the theft; the letters “were from the realm of the dead. Doris and I were alive.”

Fact: Dealers began to get suspicious of Israel’s letters because they dealt too explicitly with Noël Coward’s homosexuality

In the film, the net begins to close on Israel when a dealer grows suspicious of her Noël Coward letters. In real life, one of Coward’s friends who was also a collector noticed that some of the playwright’s letters that Israel had sold referenced his sexual orientation. While alive, Coward had been extremely discreet about his private life. Many dealers began refusing to buy Israel’s letters after the fakes were exposed.

Fact: After dealers began to catch on to Israel’s embellishments and forgeries, she began stealing real letters

In both the film and the memoir, Israel decides to go into outright theft after her fakes are exposed. “I was going to take a crook’s tour of major university libraries,” she wrote, “replicate some valuable letters in their various collections, and then replace the McCoy with forged copies.”

Fact: A dealer demanded Israel give him money in order for him to not testify against her

In the film, a slimy rare books dealer tells Israel that he was approached by the FBI and demands $5,000 to buy his silence. In her memoir, Israel writes that dealer Alan Weiner really did ask for the money. Promising to pay him, she later sold him stolen letters, effectively making him buy his own silence.

Fiction: Israel destroyed the evidence of her crimes after being served with a subpoena that forbid her from doing so

In the film, Israel is served with a subpoena that explicitly forbids her from destroying evidence related to the forgery case. She immediately goes home and destroys all the evidence she can find. According to her account, Israel was only confronted on the street by a pair of FBI agents, which prompted her to go home and dispose of her research materials and typewriters. Of course, it might be fair to take this particular detail of Israel’s recollection with a grain of salt.

Fiction: Israel befriends Jack Hock at a bar after first meeting him at a book party several years earlier

The film fictionalizes much of Israel’s friendship with Jack Hock, a likable grifter played by Richard E. Grant. She befriends Hock at a bar shortly before beginning her forging escapades. In real life, the two had been longtime friends until Israel found out that Hock, who had been shopping one of her books in order to make a movie adaptation, had forged her name on an option extension.

The film strongly implies that Hock is homeless, or something close to it. But in her memoir, Israel describes staying at Hock’s “well-appointed Mitchell-Lama apartment.” After they begin stealing and selling letters together, Hock moved into an apartment on West 72nd Street.

Fact: Israel caught Hock trying to steal from her

In the film, Hock tries to swindle Israel out of her share of their ill-got earnings. This episode played out in real life remarkably similarly to the way it does in the film. Hock, claiming to have sold a collection of stolen letters for $1500, gave Israel $750. When she asked to see the rest of the money, it was revealed that he had actually been paid $2,000 for the letters. After the incident, Israel began accompanying Hock to their sales and waiting to meet him nearby when the deal was completed. 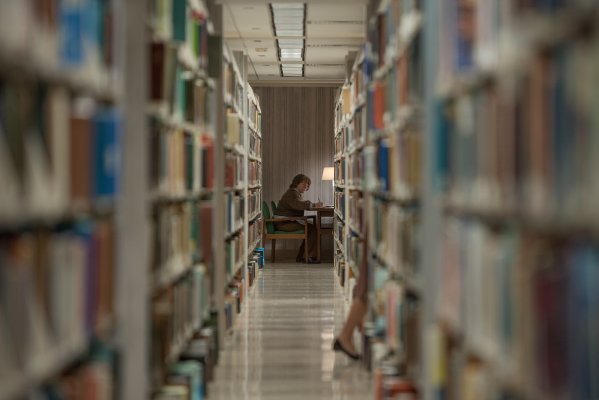 "I Never Think of Myself as Public.” Why Melissa McCarthy Relates to Her Reclusive New Character
Next Up: Editor's Pick